Headlined by the legendary Open Championship venue but home to over 30 links, parkland and heathland courses, the region known as Carnoustie Country is among Scotland's most exhilarating golf destinations, comprising historic and influential designs throughout the scenic counties of Angus, Perthshire and Fife, which had been laid out by luminary figures including James Braid, Old Tom Morris and Willie Park Jr.

The blending of quality and variety is what makes this part of the world special, there truly is something for everyone, whether it be experiencing famed championship links courses, discovering the tranquility found inland, or sampling the picturesque nine-holers dotted across the countryside, Carnoustie Country is a delicious feast of golf, as described by Golfshake Ambassador Andy Picken, where you will leave both charmed and refreshed. 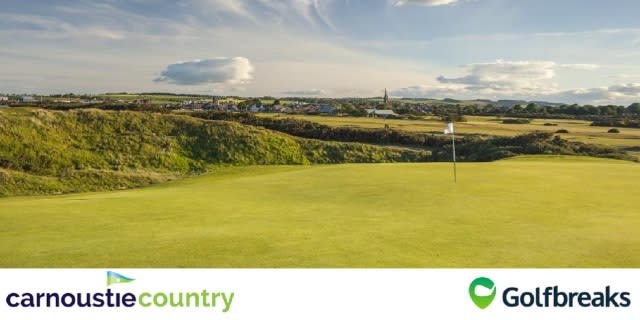 It's hard to escape the allure of Carnoustie, particularly its revered Championship Course, which has hosted the world's best in The Open on eight occasions, most recently in 2018 when Francesco Molinari triumphed for Italy. Renowned for its challenge, bunkering and range of holes, the list of winners here includes Padraig Harrington, Paul Lawrie, Tom Watson, Gary Player, Henry Cotton and Tommy Armour.

Famously, the great Ben Hogan played in only one Open Championship, at Carnoustie in 1953, where he secured the Claret Jug in a victory that remains an indelible part of local folklore.

Discussed at length on the Golfshake Podcast and featured in several articles, Carnoustie is rightly considered among the finest courses on the planet and treading in those iconic footsteps is something that every golfer should have on their list.

However, there is more to this impressive facility than the Championship Course, visitors will relish the chance to play both the Burnside and Buddon, which share the same landscape as their big sibling and provide an excellent companion piece.

Despite the name, there is far more to Carnoustie than the eponymous venue. Golfers who relish a traditional links will love the ancient 1562 (Medal) Course at Montrose Golf Club, among the oldest in Scotland, described by two-time Masters winner Ben Crenshaw as “A magnificent stretch of marvelously natural ground which depicts how the game was born."

Just across the railway line from Carnoustie, the highly regarded Panmure Golf Club is an understated gem, robust, memorable and thrilling to play, the course where Hogan practiced before his Open success, a little piece of history that is documented within this Golfshake Feature Article.

The Medal Course at Monifieth is Highly Recommended on Golfshake, an Open Qualifying Venue, where Tom Watson first tasted links golf, and remains a fine test, showcasing a terrific array of holes that will examine players of all standards.

Venturing across to Perthshire, Blairgowrie Golf Club is home to a pair of fantastic courses, the Rosemount and Lansdowne, the former considered to be one of the leading inland layouts in Scotland, a wonderful heathland course designed by James Braid with influence from Dr Alister MacKenzie, while the testing Lansdowne was created by Peter Alliss and Dave Thomas, completing 36-holes that are hard to beat anywhere in the UK.

Elsewhere, Scotscraig and Drumoig fly the flag for Fife and are just a short drive from St Andrews, the Fair City of Perth is represented by Murrayshall, while the county of Angus is home to many other memorable courses that include Edzell and Forfar, with Piperdam near the city of Dundee.

With all this considered, one visit to Carnoustie Country probably won't be enough!

You've seen the courses, but where to stay? Luckily, with Dundee and several quaint towns in the area, there isn't a shortage of options, however, the standout is clearly the Carnoustie Hotel, Golf Resort and Spa, which serves as a backdrop to the imposing 18th on the Championship Course.

Within the complex are 75 en-suite bedrooms and 10 suites, while the dining selections include the AA Rosetted Dalhousie Restaurant, more relaxed Brasserie Bar & Terrace, and the traditional Calder's Bar. There is a sumptuous spa in the building, not to mention the impressive leisure facilities, which are composed of a large heated swimming pool, Jacuzzi, whirlpool, steam room, sauna and gym.

Additionally, if you fancy something different, Dundee is blessed with many hotels, notably the Best Western Woodlands or Best Western Invercarse, offering an ideal platform to experience the City of Discovery and its many attractions, including the V&A, RRS Discovery and Caird Hall.

Throughout Carnoustie Country, whatever your needs and budget, there is accommodation suited for you.

When you reflect upon the quality and depth of the courses, the history and scenery, then it's easy to see why Carnoustie Country is fast becoming an essential destination in the minds of golfers.