Treading in the Footsteps of Tradition

The more I reflect on my recent to trip to Carnoustie Country the more I think about its historical context and its significance to global golf. I had considered the phrase “Treading in the footsteps of tradition” as I planned for this trip.

I was excited at having the opportunity to follow in the footsteps of some of the greats in the game. I will never play football at Wembley or cricket at Lord's, but one of the most special aspects of golf is that it provides us all with the chance to play on the world’s best golf courses, where legends of the game have gone before. I didn’t fully appreciate how relevant this was until sitting down to write my review.

One of my golfing heroes is Ben Hogan. He was born in Stephenville, Texas on August 13,1912, starting as an 11-year-old caddying at Glen Garden Country Club in Fort Worth. He turned pro aged 19 but struggled for several years to establish his tour status, and it was seven years before his first victory.

In the USA he was known as “The Hawk” and in Scotland became known as “The Wee Ice Mon” as a result of his cool and calm demeanour and the fact that he required regular ice baths to be able to continue to walk after the car crash that nearly took his life.


In February 1949 he was involved in a head-on collision with a bus in foggy conditions. His wife, Valerie, was in the passenger seat and he threw himself over her to protect her just before impact. He was left with a catalogue of serious injuries, including a double fracture of the pelvis, and a fractured collarbone and left ankle. He broke several ribs and the surgery caused him to develop severe blood clots that plagued him for the rest of his life. He was told that he was unlikely to walk again never mind play golf but after 59 days he left hospital and began a rehabilitation programme.

It was constructed in his usual meticulous manner using the mantra “work, study, endure” - and it worked. Between 1940 and 1956 Hogan played in 30 majors and finished in the top five 22 times. What an incredible record of achievement.

I first became aware of him through my late father-in-law, who introduced me to the game many years ago. The first coaching book I ever read was written by Hogan and was given to me by my father-in-law. It was beautifully illustrated and most of its content is still relevant today. “The Modern Fundamentals of Golf” illustrated by Anthony Ravielli is an absolute gem.

Carnoustie Country - Golf and So Much More

Hogan became a real sporting celebrity when Hollywood made a film of his life called Follow the Sun. It detailed his biography and his battle back to health after the crash. In 1953 he won The Masters and the US Open. He was persuaded to travel to Carnoustie to compete in The Open, where, for the first time in his life, he used the smaller British golf ball.

As part of his preparations he arrived two weeks early to practice. However, his practice rounds at Carnousitie were disrupted because of the level of interest he attracted from the Scottish fans. He initially struggled to acclimatise to the alien conditions. Hogan was not used to links golf - or the Scottish weather.

He travelled to the UK in the company of John Derr, one of the best American golf correspondents to ever pick up a pen. He was granted exclusive access to Hogan as he was the only American correspondent covering the event.

Hogan initially stayed at The Bruce Hotel in Carnoustie but they were unable to provide the ice baths he required so Derr took up the room vacated by Hogan.


Hogan was moved to the Tay Park guest house, owned by National Cash Registers Dundee. Its managing director was Nelson T Carne, a member at nearby Panmure Golf Club. He arranged for Hogan to have unfettered access to the club for practice.

Hogan made such a positive impression on staff at the club that they pooled their meat rations to allow him to eat steak. He was invited to join the committee for a meal but declined to enter the dining room. At that time the club professional was not allowed in the dining room as he was classed as a club servant and Hogan ate his meals with the steward and his wife in the kitchen in protest.

He was left alone to practice at Panmure but realised that the green speeds were different to those at Carnoustie. He was given permission to cut the surface of the 17th green to replicate the pace of the surfaces at Carnousite. Hogan did the work himself and then returned the mower in pristine condition, having cleaned it himself.

Having played several rounds at Panmure with the club secretary, Hogan suggested an alteration to the sixth  hole. He believed that constructing a small pot bunker to the right of the green would add to its appeal. This was done and is now known as Hogan’s bunker.

I didn’t do it deliberately but I found this bunker with my approach and was immensely proud to produce  a sand save for a bogey on this iconic hole. 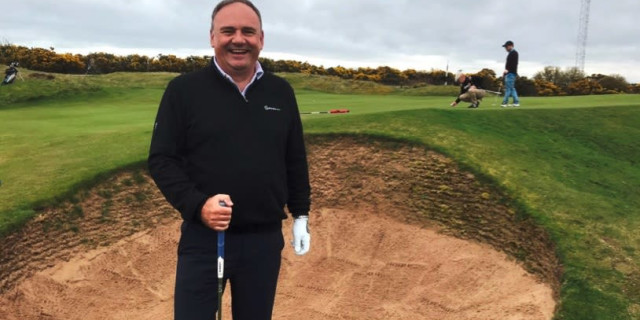 Having won The Open at Carnoustie on the one and only occasion in which he played in the tournament, Hogan was asked what his favourite hole was. Quick as a flash, he replied: The sixth at Panmure.” He was unable to complete the Grand Slam in 1953 because it overlapped with the US PGA Championship at a time when golfers travelled the Atlantic by boat rather than plane.

To have the opportunity to piece together these facts and to be able to understand a little of the psyche of this golfing giant gives me great pleasure and it takes my own personal enjoyment of the courses involved to another level.