The 2019 Golfshake Survey was completed by 3,500 golfers, focused on playing habits, providing a rich source of data, something we are now analysing to provide an insight behind the views of the golfing public for a sixth year.

Running from October until the end of December, those replying to our survey may have been weighted towards the avid, hardcore category of golfer who play throughout the year. Nonetheless, we have obtained valuable insights into regular, everyday golfers. These features can be accessed in full via our 'INDUSTRY INSIDER' section, with more articles to come. 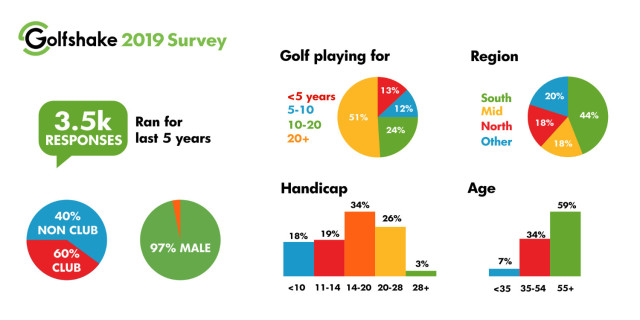 Considering their keenness, it may be unsurprising to learn that 93% of those completing the survey play golf at least once per month, with 50% stating they play every week, and a remarkable 18% playing twice per week. Furthermore, 54% stated that they played golf in either a formal society or as part of a trip group, and 35% were part of a formal golf society.

Given the above data and frequency of golf played, it is not hard to believe that only 20% played less in 2019 than 2018, with 40% stating they played more. The largest factors when it comes to playing less golf are; time (58%), injury (33%), change in personal circumstances (27%), lack of playing partners (20%), and other hobbies getting in the way (13%).  Although it wasn't an option in the survey, of those saying they didn't play more, 19% noted that the weather stopped them playing, which would have largely been driven by the end of year turn in the weather.

In relation to playing partners, the data provided some insights into the difference between club and non-club golfers and different age demographics. 63% of club golfers had a social golf circle of up to seven golfers and 37% with eight or more, compared to club golfers where this figure changed to 41% and 59%. Interestingly, 25% of non-club golfers only had a social golf circle of 1-3 other golfers, and this figure was 26% for the under 35 age group. The older age demographic quite clearly had a larger social golf circle, likely to be driven by both time available to play, including frequency, and attachment to a golf club which also clearly provided access to more golfers.

An astonishing 90% of golfers would play more golf if they could which rose to 96% of non-club golfers stating this. This is similar to data from past surveys and analysed in many past and future articles. But why do we play golf?

The pure love of the game was the standout, with 82% of those completing the survey reporting this to be their primary motivation. For golf club members and golfers over 55, then keeping active was as a significant reason for playing golf.  Golfers under 35 were more likely to want to improve their game with 80% noting that as being a factor. And golfers aged 35-54 were more likely to rate competition and golf amongst friends alongside the social aspect as reasons for playing the game.

Golfers commented on how golf provided "relaxation away from work" and allowed them to "meet and socialise with people of the same ages". Additionally, golf is often seen as something people turn to later in life or when they can't compete in other sports, which is shown in the stats. Comments related to this said they play golf because they are: "too old to compete at football anymore", but we also must remember that golf is unique in that we can all compete with each other, with one golfer commenting "it's the only sport I'm equal to my friends", largely due to the handicapping system.

Those who decry the game will often reference that infamous quote: "Golf is a good walk spoiled" - usually attributed to Mark Twain, but often it is "golf" that gets us out in the first place. One golfer raised this point, saying that they enjoyed being "out in the fresh air and countryside". Additionally, as evident in the data from being active, being social and meeting other golfers there were several comments similar to the work comment above which simply stated; "helps with my mental health".

Pilot schemes on the NHS found that golf enhanced levels of fitness, muscle strength and happiness, particularly in older people, but further studies have commonly cited the game as being a tool in combating anxiety, depression, lowering stress, and improving social interaction.

We asked golfers; why do you play golf?

What Stops Us Playing More Golf?

With 90% of golfers stating they would play more if they could, is there anything that could be done to encourage that?

Time is the main barrier mentioned, so could shorter forms of the game help? This is a topic we have covered before and will come back to in a future article from the data. However, just as something to consider, where is our time being taken up elsewhere? To help answer this we asked the survey respondents; "what other activities do you do?" Walking was by far the most popular option selected, with this number increasing from the average by 17% for golfers over 55.

In an age where we hear so much about fitness and health, not only how this can help within our lifestyles but also in a golf context, around one in three golfers stated they participated in some form of fitness or gym exercise, and while this number was slanted to a younger demographic, 27% of over 55s still participated in this activity.

Looking purely at data that may affect the playing habit of golfers, non-club golfers, as well as golfers under 55, were more likely to still participate in team-based sports. Additionally, running was a standout statistic for the under 55 age group compared to that of over 55s. However, if we are purely looking at activities that either impact or potentially complement our interest in golf, then the data highlighted that 11% of golfers over 55 also participate in fishing.

While the data may not provide any answers for getting people playing more golf, it does offer insights into the reasons why golfers don't play more often. Regardless of the initiatives or discounts on offer, until there is a change in personal circumstances providing more time in our social life, than there may be little chance of increasing the golf consumption for some demographics.

* The above data was extrapolated from sample sizes of the audience who had completed the survey whilst taking into account a % of survey respondents who had skipped this question.

Ultimately, people are drawn to this game for a variety of reasons, which indicates that there is no size fits all solution to growing the number of golfers. However, breaking down the factors cited across each age group, you begin to see the opportunities presented; the health benefits, the social interaction, the ability to be competitive at sport later in life. These can all be used as potential attractions to new players, whatever their background and personal circumstances.

Ask yourself; why do you play golf? What is the specific appeal, or is it a multitude of reasons that make the game such an enriching part of your life? Finding that answer may help to understand methods of expanding the reach of the sport in future.

Majority of Golfers Continue to Play Through Bad Weather

What Golf Needs to Change in the 2020s