RORY McILROY kicks off 2023 looking for a third victory at the Dubai Desert Classic at Emirates Golf Club.

Having won the tournament in 2009 and 2015, McIlory said: “I always look forward to playing the Dubai Desert Classic, and it is a golf course that I love to play. Lifting the Dallah trophy for a third time is something I would like to achieve.”

McIlroy had a chance to win last year but dropped a shot at the last hole. A birdie at the par five would have given him the title while a par would have given him a place in the playoff with Viktor Hovland and Richard Bland. But the Northern Irishman found the water with his approach and stormed off.

Having finished eagle-birdie, Hovland ended the week on 12 under par and secured the title with a birdie at the first playoff hole. It was his sixth success in two years and it took him to third in the world rankings. McIlroy began the week in eighth place in the rankings.

It also provides a rare opportunity for a host of LIV Golf rebels to compete. These include Lee Westwood, Sam Horsfield, Patrick Reed and Bernd Wiesberger. 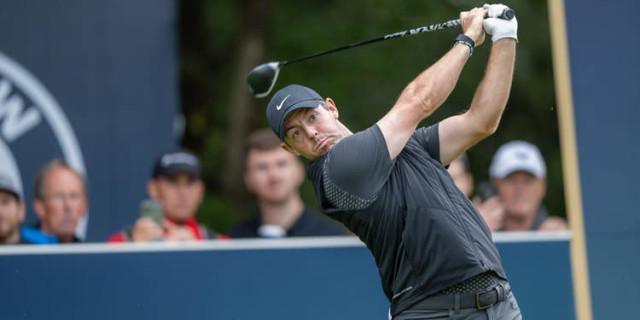 Lowry’s career highlight came when he lifted the Claret Jug at Royal Portrush, winning by an impressive six strokes. A four-time winner on the DP World Tour, and twice on the PGA Tour, he secured his second Rolex Series title at the BMW PGA Championship in September, in a season that also included a top three finish at The Masters.

He loves this part of the world, having won the Abu Dhabi HSBC Championship in 2019. Lowry said: “I always enjoy going to Dubai and I am delighted to be returning to Emirates Golf Club. I’ve had success in the UAE in the past, and it would be great to add my name to the impressive list of players who have lifted this trophy.”

Fleetwood ended the 2022 season in style, securing his sixth DP World Tour title when he successfully defended his Nedbank Golf Challenge title in November. The former European Number One has also tasted success in the UAE with two wins in Abu Dhabi, and was runner-up to Lowry at the 2019 Open.

Fox had a year to remember in 2022, finishing second behind McIlroy in the season-long DP World Tour Rankings after winning the Ras Al Khaimah Classic in February and the prestigious Alfred Dunhill Links Championship in October. With a further eight top 10s, including a playoff defeat at the Dutch Open, the Kiwi, will be looking to take that impressive form into 2023 and his appearance in Dubai.

Englishman Hatton is another who has enjoyed success in the region after winning in Abu Dhabi two years ago. The two-time Ryder Cup star has six DP World Tour victories to his name, including four Rolex Series titles. After a runner-up finish at the season-ending DP World Tour Championship, he will be aiming to carry on that form.

Simon Corkill, Executive Tournament Director of Dubai Desert Classic, said: “Since the first ball teed off more than three decades ago in 1989, the Dubai Desert Classic has gone from strength to strength, attracting a wide array of top golfers from around the world so to have Rory McIlroy confirm his participation exemplifies how highly regarded the tournament is.

“He is one of the greatest names not just in golf but also in sport in general and we are delighted that he will be returning to Emirates Golf Club again. This is a fantastic opportunity for fans to see the world number one in action on the Majlis course, a place he knows very well, in what will be another important year for him."

Emirates Golf Club, also known as Yasmines Links, is a spectacular par 72 measuring 7,428 yards. The from nine is a par 35 and the back nine, featuring three great par fives, is a par 37. Designed by Karl Litten, it was built in 1988. It was quite literally carved out of the desert and features many waste areas, palm trees, bunkers, water hazards and large putting surfaces. The fairways are pretty generous but miss them at your peril.

It is hard to see beyond Rory McIlroy. He is coming off the back of a wonderful year and this is his first start of 2023 so he will be fresh. He is a two-time winner of this tournament and has plenty of top 10 finishes, including being runner-up in 2018.

Tommy Fleetwood. Loves this part of the world

Adrian Meronk. Going to be a superstar

Rory McIlroy. Will feel the course owes him something

Tommy Fleetwood. Back to his best