Robert MacIntyre Player Profile And What's In The Bag

ROBERT MacIntyre put a miserable season behind him as he saw off U.S. Open champion Matt Fitzpatrick in a play-off to win the Italian Open.

MacIntyre was thrilled with his victory and hopes to find himself back in Rome as part of Europe's Ryder Cup side next year.

He said: "It's my main goal - it's my only goal for the next year. At the start of the week I didn't think this week was going to be the one - the style of golf course, the way it was playing.

"But we worked on a few things on Tuesday and Wednesday and I felt so in control of my golf ball this week - my wedges, my long irons and even that hybrid that came into the bag last week.

“This means everything. I was down and out about two or three months ago.

“I didn’t know what I was doing, didn’t know where to go. But we spoke to the right people, started working with Simon Shanks and I’ve hit two of the perfect golf shots into the last there. There’s so much hard work gone into this."

The Scotsman made ten birdies and three bogeys in a spectacular 64 on Sunday to force a play-off with third-round leader Fitzpatrick before birdieing the first extra hole to claim his second DP World Tour title.

There were several twists and turns on the back nine as the lead changed hands throughout a thrilling afternoon at Marco Simone Golf and Country Club.

MacIntyre began the day three shots off the lead but made a blistering start, firing six birdies and no bogeys in a front-nine 29 which featured some remarkable ball-striking.

But his two-shot lead evaporated on the back nine as a run of three bogeys and three birdies in the seven holes immediately after the turn coincided with Fitzpatrick breaking his sequence of ten straight pars by going birdie-eagle from the 11th. 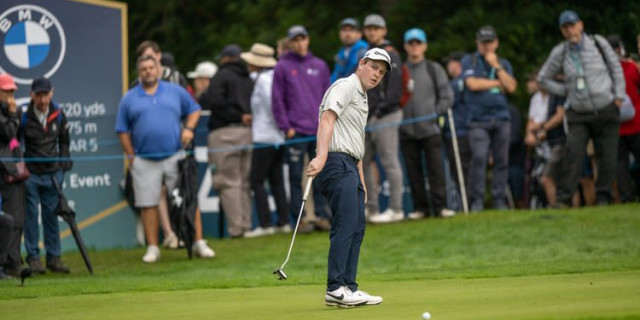 Fitzpatrick then took the outright lead with a birdie at the 16th, but just as the Englishman gave the shot straight back on the next hole, MacIntyre birdied the last to set the clubhouse target at 14 under and lead on his own.

Frenchman Victor Perez had a chance to pull alongside MacIntyre but missed his six-foot birdie putt on the last, to leave Fitzpatrick as the only man who could catch the leader.

And he did just that, knocking in his birdie putt at the 18th to force extra holes.

But after missing the fairway at the first play-off hole, Fitzpatrick could only make par, with MacIntyre's birdie enough to clinch the trophy.

Fitzpatrick's closing 67 contained an eagle, three birdies and a solitary bogey and saw him finish the tournament on 14 under, one clear of Perez in third.

Rory McIlroy was another shot back in fourth place, with Aaron Rai and Lucas Herbert in a share of fifth on 11 under.

Who is Robert MacIntyre?

Robert MacIntyre was born in Oban in August 1996. In 2013 he won both the Scottish Youths Championship and the Scottish Boys Open Stroke-Play Championship. He won the Scottish Amateur in 2015 and in 2016 he lost 2&1 in the final of the Amateur Championship. MacIntyre represented Scotland in the Eisenhower Trophy in 2016 and played in the Walker Cup the following year. He turned professional in 2017 and played on the Challenge Tour in 2018, gaining his DP World Tour card. In 2019 he was twice runner-up and was sixth in The Open and was named rookie of the year. In November 2020 he won his maiden DP World Tour title, the Aphrodite Hills Cyprus Showdown.