Shane Lowry Player Profile And What's In The Bag

SHANE LOWRY produced a flawless final round of 65 to win the BMW PGA Championship at Wentworth. He finished the tournament - reduced to 54 holes after the death of The Queen - on 199, 17 under par.

The former Open champion also completed the tournament without dropping a single shot to par. Lowry beat Rory McIlroy and Jon Rahm by a shot after the Spaniard raced through the field on the final day and came within a whisker of pulling off an unlikely victory.

Rahm produced a sensational final round of 62. He birdied the fourth and ninth holes to reach the turn in 33 but then moved into top gear on the back nine with birdies at the 10th and 11th, an eagle at the 12th followed by yet another birdie at the 13th. And he wasn’t finished yet. Although he dropped a shot at the 15th he produced a grandstand finish, with birdies at the 16th and 17th followed by a brilliant eagle at the par-five 18th.

He then had to sit back and wait to see whether his 16 under par total would be good enough. And for a while it looked like it might be.

It was Lowry’s first victory since he picked up the Claret Jug at Royal Portrush in 2019 and he proved to be a popular winner. 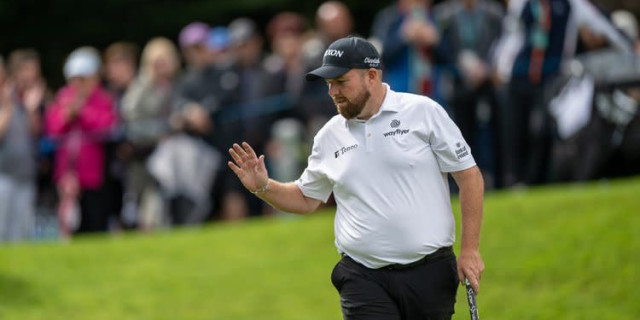 Paul McGinley said: "He works on the basics, he works on the fundamentals. His short game is superb. His putting has always been a little bit in and out, now we are starting to see more consistency in his putting. He’s had a really good year with the putter so all in all he’s got the guile, we know he’s got the heart. He’s won big titles. It’s a pretty impressive CV he’s starting to build.

"He needed this win. He’s let a few opportunities slip. He hasn’t won since The Open Championship and I think everybody around the game will be delighted Shane has got this title. He’s a deserved champion and he joins a long list of illustrious winners."

McIlroy was also fulsome in his praise for Lowry, saying that his friend deserved to win.

Lowry, heading into the final round two strokes off the lead, followed a 10-foot eagle at the par-five fourth by holing from the fringe at the seventh and converting a 25-foot birdie at the next to reach the turn in 31.

The 35-year-old started his back nine with a birdie to move within one of Rahm, who had set the clubhouse target with a round-of-the-day 62, before pulling level with the Spaniard by getting up and down from a greenside bunker to take advantage of the par-five 12th.

McIlroy had also eagled the fourth earlier in the day but three-putted from distance to bogey the eighth, only to respond with birdies at the 10th, 12th and hole from the fringe at the 15th to get within one of Lowry.

Lowry failed to find a birdie at the 17th but reached the par-five 18th green in two and two-putted from 20 feet for birdie, setting the clubhouse target, which was enough for victory when McIlroy was unable to find a final-hole eagle to force a play-off.

Lowry collects a cheque for $1.36m for his efforts.

Talor Gooch finished as the highest-ranked member of the LIV Golf contingent after a final-hole eagle closed a 67 and lifted him to fourth spot, with Patrick Reed posting a bogey-free 63 to end the week in a four-way tie for fifth.

Who Is Shane Lowry?

Lowry was born in Clara in April 1987. In May 2009 he won the Irish Open while still an amateur. Lowry shot a 62 to equal the lowest ever by an amateur on the circuit and led from the second round onwards. He turned professional the following week. His first victory as a pro came at the Portugal Masters in 2012. In 2014 he finished second at the BMW PGA Championship and ninth at The Open. The following year he won the WGC-Bridgestone Invitational, the biggest win of his career at that point. He was runner-up at the 2016 US Open after having a great chance of winning his first major. His crowning glory came at The Open Championship at Royal Portrush in 2019. In front of a passionate gallery cheering his every shot, Lowry opened with successive rounds of 67 to share the 36-hole lead. He then took control with a third round of 63 and would go on to win by six shots. He has won six times on the DP World Tour. His victory at Wentworth takes him to fifth in the DP World Tour standings. He is 19th in the world rankings.