Rory McIlroy Player Profile And What's In The Bag

RORY McILROY’S fourth-place finish at the DP World Tour Championship means that he finishes as Europe’s top golfer for the fourth time and caps an outstanding season that also saw him him claim the Tour Championship, the CJ Cup and the Canadian Open. And he kicked off the 2022-23 PGA Tour season by winning the CJ Cup again.

He has regained the top spot in the world rankings, finished second at The Masters, third at The Open, tied fifth at the US Open and eighth at the US PGA Championship. In 16 starts on the PGA Tour  he had 10 top-10 finishes, picked up more than $8m in prize money and pocketed an $18m bonus for winning the FedEx Cup. He also collected a $2m bonus for finishing on top of the DP World Tour rankings. 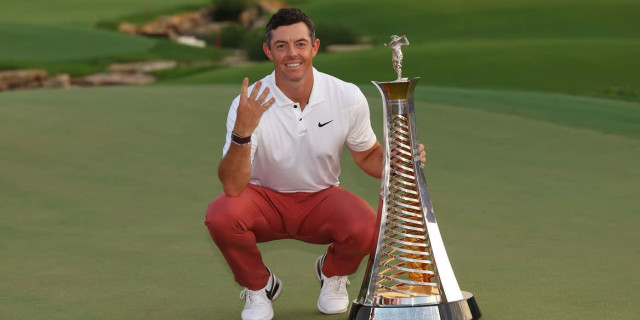 McIlroy is a four-time major winner but his last one came in 2014. His victory at Congaree in the CJ Cup in October 2022 was his 35th success and took his career earnings on the PGA Tour beyond $68m. He is fourth on the all-time list. He finished top of the pile in the FedEx Cup in 2021-22, winning three times and pocketing $8,654,566 in prize money on the PGA Tour alone. He has also won almost 43m euros on the DP World Tour.

He has now won 23 times on the PGA Tour and 12 on the DP World Tour. His first professional victory came at the Dubai Desert Classic in 2009 when he was just 19 years old.

His best year on the PGA Tour came in 2012, when he won four times. His victory at the CJ Cup in October 2022 means he has now won four times in 12 months.

After just one tournament on the PGA Tour, his stroke average this season is 67.286. He is first in driving distance, hitting the ball an astonishing 349.5 yards on average, finding 69% of fairways and hitting 70.83% of greens in regulation. He averages 5.25 birdies per round.

Rory McIlroy - What's In The Bag