Ryan Fox Player Profile And What's In The Bag

RYAN FOX produced a final round of 68 to win the Alfred Dunhill Links Championship and then paid tribute to Shane Warne, the legendary Australian cricketer who died earlier this year.

Warne partnered Fox to a second-place finish in the team contest last year and Fox said: "It means a lot. To be honest the only person I can really think of at the moment is Warnie. He meant a lot to me and this event and was a great mate. It's a terrible shame he's not here."

Fox began the day four shots behind England’s Richard Mansell but quickly reeled in the leader, taking the outright lead after seven holes and seeing off the challenges of a host of top players, including Rory McIlroy, who produced a closing 66 to finish two behind Fox.

The New Zealander led by three with three holes to play. He suffered a late scare at the 17th but managed to limit the damage to just one dropped shot before safely parring the last to claim his second DP World Tour title of 2022 and third in all.

Fox finished the tournament on 15 under par after carding seven birdies and four bogeys, one shot clear of Callum Shinkwin and Alex Noren.

The New Zealander's parents - Adele and Rugby World Cup winner Grant Fox - are over in Europe for a month but he did not have much luck during the first few weeks of their stay, with injury and lost clubs affecting him in that time.

However, he managed to clinch victory in front of them and said: "I'm going to enjoy celebrating this one with the family."

Mansell dropped two shots at the second after hitting his approach into a gorse bush and he struggled from then on, meaning his search for a first victory goes on.

Fox opened his birdie account at the third, holing from 26 feet to move to 12 under.

A five-foot birdie putt at the fifth earned him a share of the lead alongside overnight leader Mansell, and he led on his own courtesy of his third birdie of the day at the seventh, drilling his low approach shot to four feet before knocking in the putt.

Fox dropped a shot on the par-three eighth but bounced back with a birdie at the ninth to head to the turn with a one-stroke lead ahead of Mansell and McIlroy.

Birdies from eight feet at the 10th and 12th stretched Fox's lead to three shots as some wonderful approach play helped him take command of the tournament.

A bogey at the 13th reduced Fox's advantage to two but he holed a huge birdie putt from more than 50 feet on the 15th to regain his three-shot lead.

After finding the thick rough off the tee at the 17th, Fox managed to get back on the fairway with his second shot but a disappointing chip left him with a 75-foot par putt.

He knocked that to within four feet and was able to drop just one shot, with his lead now down to one.

But a straightforward par at the last sealed a victory which sees him soar up to third on the DP World Tour Rankings in partnership with Rolex. 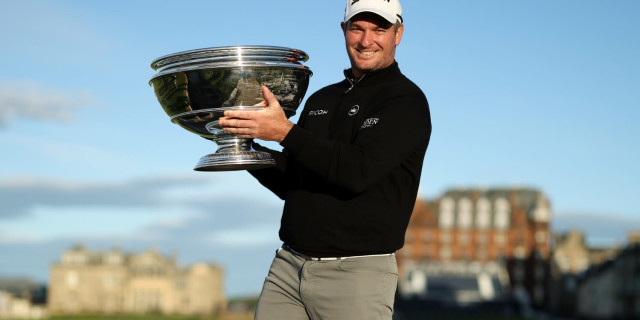 Who is Ryan Fox?

Ryan Fox was born in Auckland in January 1987. His father is Grant Fox, who helped the All Blacks win the Rugby World Cup in 1987 and his grandfather played cricket for New Zealand. Fox turned professional in 2012 and joined the Tour of Australasia, winning the Western Australia Open in 2014 before adding the Queensland PGA Championship in 2015. He joined the Challenge Tour in 2016 and finished fourth in the order of merit, securing his DP World Tour card in the process. He had to wait until February 2019 for his first victory, at the ISPA Handa World Six, when he became the first New Zealander to win on the DP World Tour in 10 years since Danny Lee. Fox won his second title in February 2022 at Ras Al Khaimah Classic. He also lost in a playoff at the Dutch Open to Victor Perez and was runner-up to Adrian Meronk at the Irish Open.

He began the Alfred Dunhill Links Championship in seventh place in the DP World Tour rankings and 47th in the world rankings.