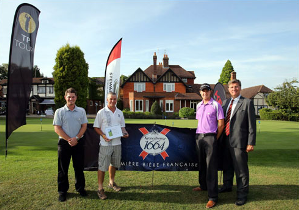 of the TP Tour Series.

Held on Wednesday 21st August, the event saw 35 teams of professional and amateur players battle it out in the one day event. Professional golfers from across the South East took part, as well as the Series Patron, golfing personality and former Ryder Cup star, Ronan Rafferty.
At the day's conclusion the pairing of Steve Brown and Gatton Manor Member Barry Burchell were the overall Team winners, no mean feat on a challenging course which requires skill to overcome the water which comes into play on 10 of the 18 holes. Barry and Steve dovetailed well throughout allowing them to post a net score of 61.
Competition was extremely tough for Steve Brown of Wentworth and Sam Hutsby, European Challenge Tour player from Liphook GC: they could not be separated, both carding very impressive 7 under par 65's in the Professional category. Each took home a winner's cheque for £1450. Steve added to his winnings with a further winner's cheque for £400 in the Team category.
The Longest Drive competition took place on our famous 17th hole, which at 645 yards is the longest in South East England. This was won in some style by lady amateur, Shani Waller from Knole Park.
Special mention must also be given to pro Chris Linstead of Chart Hills who aced the 2 nd hole. Sally Moulden, Golf Manager for Gatton Manor said "The competition here has been fantastic and spectators and players alike have thoroughly enjoyed the day. Our sponsors and contributors have been a great support and the course was presented in superb condition".
For more information please visit www.tptourseries.com