Povey, Gee and Heath become the latest to win on the TP Tour 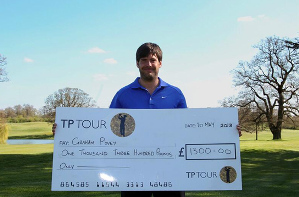 Graham Povey from Hertfordshire was the winner of the TP Tour’s 36 hole event at Hanbury Manor Golf Club.
Povey played brilliant golf to finish seven under par for the tournament with rounds of 70 and 67.
The Marriott venue, a Nicklaus design, former host of the European Tour’s English Open was in great condition for the event with several top players competing, including European Tour winner Tom Lewis.
Lewis finished in third place with rounds of 72 and 69, three under par with former Asian Tour player Simon Griffiths who lead the way after round one, finishing second on five under par.

Last week the TP Tour visited Ealing Golf Club in West London, for the inaugural ‘London Pairs’ won by European Challenge Tour players Adam Gee and James Heath.
The field of 46 teams contained many leading Touring pros, including former Ryder Cup star Paul Broadhurst.
All players and visitors were unanimous in praise for the course and the greens, which are truly world class, measuring 13 on the stimpmeter!
The format of the event is unique, 18 holes betterball followed by the 6 top teams contesting a 4 hole shootout in the same vein as ‘The Open’.
Peter Tarver Jones and his partner Ben Martin came close to winning, finishing on 8 under par after 22 holes alongside Gee and Heath. Gee holed a 6 foot birdie to force a sudden death play off and the teams returned to the 176 yard 18th, with Heath hitting a peerless 7 iron to three feet to seal victory and £2,000 winners cheque.
Full results - www.tptourseries.com