The Tour made its regular visit to one of golf’s design gems, Liphook Golf Club last month – Liphook is a stunning layout, with some of the finest greens in the country.

25 year old James Doswell won his first TP Tour event, with a three under par 67.
Doswell, a former England amateur, turned professional in 2011, and represents Highwoods Golf Club in Sussex.
James is a one of a new bred of talented young players on the TP Tour  and has been a consistent performer on the Tour for the past two seasons.
Hot on his heels was Zane Scotland, the pre-tournament favourite shooting a tidy 68. Iain Pyman, the former British Amateur champion finished in third place with a 69.

The second of the TP Tour’s Elite Pro Am’s took place at the world famous Stoke Park in Buckinghamshire, the classic venue that was designed by Harry Colt in 1909.
Notable attendees included European Ryder Cup players Paul Broadhurst, Steve Richardson and Ronan Rafferty.
Also playing and finishing third in the team event was Olympic Rowing legend and keen golfer Matthew Pinsent.
Top pros finishing on 68 were Raymond Russell and Andrew Marshall.
The event raised over £10,000 for the Captain’s Charity – the Prostate Project. 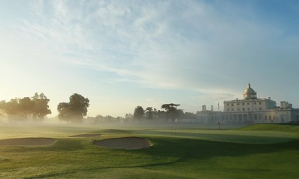 The TP Tour visited the classic Langley Park golf club in Beckenham for the second year running and the course was once again presented in fantastic order.
The course also proved a tough test despite its yardage of less than 6500 yards.
Several European Tour winners were in the field, including Gary Emerson and Mike McLean.
Nick Algate from Moor Park Golf Club, made five birdies in his round of 68, wining by two shots from former Asian Tour winner Chris Rodgers.
A delighted Algate claimed his first victory on the Tour and picked up a cheque for £1200.
Gary Emerson finished in third spot with a 71.

The former European Open venue East Sussex staged the third 36 hole event of the year on the TP Tour, which featured many top players including former Ryder Cup star and 6 time European Tour winner Paul Broadhurst.
Starting his back nine at level par - Lloyd Kennedy, Challenge Tour player from Chelmsford, Essex proceeded to burn up the East course’s back nine for an inward score of 30, six under par and a phenomenal round of 66 considering the conditions of heavy rain and near gale force winds.
Lloyd shot a steady 72 the next day on the West Course to seal victory by six strokes from Ben Martin and pick up the first prize of £3,000.
For Full tour results and info visit : www.tptourseries.com
Next up on the TP Tour - a Major 36 Hole event at Kingswood GC Surrey 25/26 June. Spectators welcome and free to watch.
TP Tour: Office 01628 566553