2022 was a big year for drivers, with the likes of Titleist, TaylorMade, Callaway and PING releasing new sticks, showing off the latest technology and adding yards to players’ drives and lowering their scores.

From his base at Howley Hall Golf Club in Leeds, Golfshake’s Equipment Expert Ryan Rastall has picked out five drivers that have really impressed him, which you can see in the video below.

For more details about these drivers and others which made an impression on us during 2022, read on.

From Titleist’s classic TSR to TaylorMade’s carbon-clad Stealth, these are the drivers that make our shortlist for 2022 and which you should be top of your list if you’re considering an upgrade for the new season.

Last year, Callaway gave us one of their best ever drivers, indeed, Ryan Rastall reckoned it was the best driver he had ever hit across all brands in terms of distance and forgiveness - with the Epic Speed. The Rogue ST (the ‘ST’ stands for ‘Speed Tuned’) echoes that successful formula but develops it, creating a driver which is arguably even better. Like last year’s club, the Rogue ST has two metal rods connecting the crown and the sole behind the clubface, which stops compression leaking off the face and sapping ballspeed, especially on off-centre hits - the Jailbreak Technology speed frame. The club also follows the Epic Speed in sporting an A.I.-developed Flash Face, designed to further increase ballspeed. The biggest difference between the Rogue ST and last year’s Epic Speed is that whereas the Epic’s head was designed with sliding weight tracks, the Rogue ST features an 11.5g tungsten weight combined with a triangle carbon crown. This has allowed Callaway’s engineers to be more flexible in placing weight and altering performance depending on what players require. Four different models are offered spanning the most forgiving ST Max and ST Max D (the ‘D’ stands for ‘draw bias’) through to more better-player centric models the Rogue ST LS (low spin) and ST Triple Diamond LS.

“I really enjoyed hitting all these drivers. The forgiveness aspect is the big thing, showing that when you don’t hit the middle of the face you’re still going to get really good ball speed.”

If you wish to buy this driver, why not visit Scottsdale Golf, American Golf or Golf Support.

New for 2022, Cobra’s LTDX is the latest range from the brand, as it looks to reassert itself as a key player in the drivers market and become the weapon of choice for the golfing masses. It follows on the heels of last year’s successful RadSpeed (which made Golfshake’s picks for the best 2021 drivers) pushing length and forgiveness even further. Three models are offered: a Max, LS (low spin) and the standard King LTDX, with different weights to promote different ball flights depending on the preferences of the player. With the LS, the club’s 19g internal steel and tungsten weights are positioned more towards the front of the head, to promote a low spin low flighted shot, whereas the standard and Max have weight put more towards the back. The Max has heel-weighting to promote a draw shape. LTD stands for ‘Longest Total Distance’ and this is certainly something which Cobra have prioritised. Compared to the RadSpeed there is 30% more carbon in the sole and crown of the LTDX to give faster ballspeed through better weight and aerodynamics. Cobra introduced its H.O.T. (Highly Optimised Topology) Face Technology - in which A.I./machine learning tech is used to pinpoint most common mishit areas for different golfers that are then reinforced - in the 2019 F9 Speedback which had 9 H.O.T. zones, but this looks positively meager compared to the LTDX’s 15. Power Core Technology is also in play: as each head is given multilayer weighting for great balance throughout the usually relatively fast driver swing.

“These drivers do exactly what they say they should do. All in all, I think they are an improvement on RadSpeed, both in terms of looks and also in terms of performance, and the feel off the face is very good as well.”

If you wish to buy this driver, why not visit Scottsdale Golf, American Golf or Golf Support.

That Rory McIlroy - probably the best all-round driver in the game - is gaming this club pretty much tells you all you need to know. The Stealth keeps aspects of technology that have become familiar with recent TaylorMade drivers such as the Twist Face (essentially a specially contoured face to catch mishits from low heel to high toe) and the Speed Pocket (enforced groove to add forgiveness on low face strikes), but adds one crucial difference: carbon. The 60X Carbon Twist Face replaces more common titanium and steel faces, which allows TaylorMade to achieve more consistency in terms of face thickness, translating to better performance. Its 60 layers of carbon sheets improve energy transfer and produce faster ballspeeds across the face. Because carbon is 44% lighter than titanium, TaylorMade has been able to add more mass on the bottom of the head to give greater forgiveness for its standard Stealth. The second option - the more refined Stealth Plus - an unapologetic better player option, which while forgiving prioritises factors like workability, with a weight track that can be altered to fine tune ball flight.

“The distance I was getting was very good, the ballspeed was good, and the club is certainly an improvement on SIM and SIM2. It has an excellent look and sound.”

PING have long been leaders in the forgiving drivers market and have kept up living to this reputation with the new G425s. New for 2022, PING’s latest driver gets a T9S+ forged face, bringing distance, ballspeed and forgiveness beyond PING’s previous G model, which are just some of the reasons it’s found a place in their tour players bags, most notably Tyrrell Hatton. Hatton games the more better-player-oriented LST (low spin technology) version. Its 445cc head is the smallest on offer here and comes in 9 and 10.5 degrees of loft, with an overall package that targets fast-swinging players. For those looking for more forgiveness, the MAX has 15cc more of head and an additional 12 degree loft version to help players get a higher launch. 26g tungsten weighting brings MOI benefits too, the highest in PING’s history, which are less prioritised in the LST. The third and final model in the range is the SFT (straight flight technology). Competing with likes of Cobra’s LTDX Max, this has heel weighting to help guard against that shot which is the bane of most amateur golfers: a slice. Regardless of the head you choose, you can expect a redesigned Internal Dragonfly pattern and Internal Ribbing, tungsten weighting for added balance and forgiveness and Arcoss Smart Caddie Grips.

“This driver has been very popular, despite now being in the second year of its lifestyle. Its forged face allows PING to engineer it really thin in places for better forgiveness on off-centre hits.”

The Titleist TSR was new for 2022. The driver continues Titleist’s penchant for classic, traditional designs - this is surely one of the best looking drivers on offer at the moment - with modern technology and performance. It was in Cam Smith’s bag for his scintillating win at this year’s Open at St Andrews so you know that this club has quality.

Three different models are on offer - the TSR2, 3 and 4 - which are each attuned to different players. A ‘max’ performance model, the TSR2 boasts a focus on speed and stability for players looking for that extra bit of forgiveness. Over previous Titleist drivers, there is improved aerodynamics, with a Multi-Plateau VFT face creating a consistent CT across the face. Centre of gravity in the head has been moved lower and more forward to optimise ball speed and spin conditions. The 460cc head is the largest in the TSR range.

The TSR 3 and 4 are both marketed as player’s drivers, for those more focused on playability. The 3 has a Speed Ring VFT face with variable thickness to focus the maximum CT/COR relationship into a sweet spot in the club’s centre. The 3 keeps the 460cc head of the 2 but has a lower launch and spin. The 4 is Titleist’s ‘ultimate low-spin driver’ and the model you’ll most likely see in the bags of staff players on tour. The head is smaller than other models (430cc) for a more classic appearance at address. Adjustability is prioritised with two adjustable weighting options giving players leverage over their spin profile.

“This club gives massive ball speed on off-centre hits and looks absolutely fantastic in the playing position. Like all Titleists, there is a more traditional design that will suit all the golfing purists out there.” 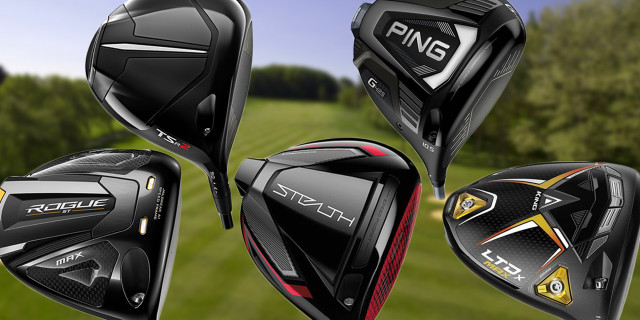 Among other standout drivers from 2022, we really admired the Mizuno ST - offering the new ST-X and ST-Z drivers, which put a premium on consistency and stability. Versus previous models, Mizuno have followed Cobra in layering up carbon for their latest drivers, to give a 40% expansion of the carbon-sole area. By doubling the back weight on the head, twisting and deflecting from off-centre hits has been dramatically reduced and the result is a more stable driver through impact than anything Mizuno has previously produced.

The ST-X is the more confidence-inspiring of the two models, comparable to Titleist’s TSR2. It has heel-weighting to counteract slices and induce a draw-biased flight which your average amateur player will be thankful for. Higher spin produces a higher launch and at the back a 20g weight has been added to further help launch and increase distance. The 460cc head is more rounded than most drivers, which more traditionally minded players will appreciate, and boasts a resilient forged SAT2041 Beta Ti face and multi-thickness CORTECH design for greater ballspeeds.

The ST-Z keeps much of the same technology as the ST-X but is targeted towards players with higher swing speeds who need to control spin. It too has a 20g back weight but without the draw bias of the ST-X and with tuning to produce a lower flight. 9.5 and 10.5 degree of loft is offered, with additional options coming courtesy of an adjustable hosel sleeve.

For more information about the Mizuno ST range, click here!

If you wish to buy this driver, why not visit Scottsdale Golf or Golf Support.

The last driver we’ve picked out for special acclaim in this list is Srixon’s ZX7. This is another driver that focuses on playability with an eye for better players. Two swappable rear weights are offered, allowing golfers to customise their shot shape and ball flight, which can be further tuned by an adjustable hosel sleeve. Versus Srixon’s previous lines, the carbon crown of the ZX7 is 15% larger to keep mass low and increase MOI, bringing with it additional forgiveness. By focusing more energy into the golf ball, and thus avoiding sappage on off-centre hits, Srixon’s Rebound Frame increases ball speed and distance with excellent forgiveness. Finally, a word must be said about the SZ7’s looks: designed from Tour feedback, the SZ7 has a flatter, shallower and straighter head than previous Mizuno drivers. The result is a classic appearance at address which will suit the eye of traditionalists and more skilled players.

If you wish to buy this driver, why not visit Scottsdale Golf.