10 of the Best Family Golf Resorts in the UK

IT IS often said that golf is a selfish game and, while that can be true, there is a way around it. A golf break doesn’t just have to be for the golfer in the family, and an increasing number of resorts have woken up to the fact that they now need to offer more than a golf course in order to attract families. We are talking about destinations that provide proper facilities for children and for Mum if she doesn’t play (or, indeed Dad). Here, we take a look at 10 of the best. We have also included at least one that doesn’t actually have a golf course on site, but is ideally located for those who want to play the game nearby.

Crowne Plaza’s Five Lakes resort sits in more than 300 acres of wonderful Essex countryside, not far from Colchester. There are two golf course, The Lakes and The Links. As the name implies, The Lakes course features its fair share of water but it offers a fair challenge to golfers of all standards. But the thing that really makes Five Lakes stand out is the hotel, which is simply stunning. Yes, it accommodates golfers, but it also offers special deals for families and is a perfect venue for weddings and corporate meetings. There is a wonderful spa, as well as a swimming pool, squash courts, pool and snooker tables. There are also plenty of food choices, ranging from buffet meals to table d’hote, bar snacks to restaurants. The bars are comfortable and spacious and there is even a night club on the site. 10 of the Best Golf Courses in Essex.

If spectacular views are your thing, Macdonald Highland Hotel, in the heart of Aviemore, is surely the place for you and your family. It is a four-star hotel with 151 rooms and the renowned Aspects restaurant. Guests have access to Spey Valley, which has been named as one of the best courses in Scotland – and it has plenty of competition. The course is surrounded by the Cairngorm Mountains and the views are guaranteed to blow you away. The resort's activity centre features play rooms for children of all ages, a large swimming pool and a three-storey supervised play area, which will look after the kids while Mum and Dad play golf, visit the gym or sample some of the other activities on offer here. Spey Valley Feature Review.

OK, so Croyde Bay is not your traditional golf resort, but it still merits a mention in our list. Bear with us to find out why. The resort features a modern 56 bedroom hotel as well as self catering cottages and summer chalet bed and breakfast rooms. It is located right next to Croyde Beach, which is one of the finest in Devon. We all like to check out feedback from people who have already been to destinations that we are considering visiting, so it is worth knowing that Croyde Bay Holiday Resort has won a TripAdvisor Certificate of Excellence for each of the past three years – and that is an award based almost entirely upon customer feedback. It is a mecca for surfers, and features two restaurants three bars and a conference centre. There is also 25m heated swimming pool, children’s pool, spa bath, steamroll, sauna, gym five-a-side football pitch, tennis, table tennis and volleyball. Golf? Well there is a crazy golf course, but if you are looking for something a little more serious there are plenty of fabulous courses nearby. 10 of Best Golf Courses in Devon.

There will be those who turn up their noses at the fact that the golf course at Crieff Hydro only consists of six holes – that would be a mistake. The location is wonderful and this is a part of Scotland where there are plenty of other courses you can sample while staying here. Besides, what better way to get the kids into this wonderful game than by starting them out on a six-hole layout with with Ben More and Ben Vorlich as a backdrop.? You can also play foot golf or disc golf. So what else do you need to know about what’s on offer here? Childcare is free, with a magnificent soft-play area, rabbits, and a swimming pool. There is also a cinema and live entertainment. The hotel’s leisure club offers bikes, pool, table tennis, games consoles, tennis, giant chess, bowls and croquet. 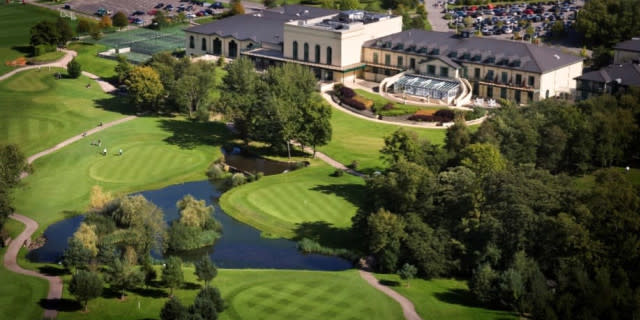 The Vale Resort sits in 650 acres and offers a choice of two championship courses. From the back tees they are two of the most testing layouts you will come across, but most societies and guests will be playing from the forward tees, and they can be sure of a fair challenge and a thoroughly enjoyable time. The Vale has hosted several PGA and European Tour events, but it speaks volumes for the place that it is just as popular with societies and company days. No matter what your standard of play, you can be sure that both courses will be in superb condition. Water comes into play on 12 of the holes that make up the Lake Course, while Wales National measures 7,433 yards from the back tees and is one of the longest courses in Europe. The hotel has 143 rooms and a spa featuring a pool, massage therapy rooms, a state-of-the-art gym with the latest Technogym equipment, sauna, steam room, whirlpool bath, fitness studios with more than 80 classes a week, plus squash and tennis courts. 10 Reasons to Stay & Play at the Vale Resort.

Overstone is set in 193 acres of wonderful countryside and offers a choice of 31 bedrooms in its hotel or 115 Scandinavian-style holiday lodges set on a secure site – book a chalet and you will receive up to four complimentary golf and leisure memberships during your stay. It was opened in 1992 by former Olympic swimmer Sharron Davies, with the central feature being the 18-hole golf course. The course is widely regarded as being one of the best in the county of Northamptonshire. It opens with a magnificent par four that measures just short of 400 yards,  played to a fairly narrow tree-lined fairway with bunkers guarding the driving landing area on the right and left. It measures 6,478 yards from the back tees. Overstone boasts a an air-conditioned gym, fitness studio with Yoga and Zumba classes, an indoor heated pool with steam room, jacuzzi and sauna and two outdoor tennis courts. It is also one of Northampton’s favourite wedding venues.

The course and hotel sit within Roe Valley Country Park, close to the Giant’s Causeway, a Unesco World Heritage Site and one of the chief tourist attractions in Northern Ireland – if you have ever been there you will know why; it is mother nature at her outstanding best.  The hotel is a former stately home that was originally built in 1729. It offers 118 rooms and suites, two restaurants, including the restored 18th-century Coach House, and a spa. The health club has an indoor heated pool, with children’s pool, sauna, steamroom, along with a jacuzzi.  The 18-hole parkland course gives golfers views of the Sperrin Mountains and Lough Foyle from elevated holes. It measures 6,261 yards and features trees and a couple of well-placed ponds. The par-three sixth hole recently underwent extensive work to include the construction of a new two-tier green, part of a £1m renovation programme. The 16th, 17th and 18th holes were also renovated by noted course architect Marc Westenborg.Facilities also include an academy and high-tech indoor teaching studio.

The Upgrade Hotel and Cottages, Machrihanish

Guests who stay at the Upgrade waken up in the morning to amazing views of the Atlantic Ocean, as well as the Hebridean islands of Islay and Jura – it is not a bad way to start your day. Machrihanish Dunes is a true links course, measuring 7,082 yards, with the Atlantic as a backdrop. It was built on a Site of Special Scientific Interest, the only course ever to be afford such a status. It sits on 259 acres and, quite remarkably, one seven acres were actually disturbed while the course was being guilt – the greens and the tees. The fairways are just as they were found, only mown shorter. It makes for a unique experience and a totally natural layout. The hotel has 22 rooms and suites, with food served in the Kintyre restaurant and bar. Or you can stay in one of the resort’s two-bedroomed self-catering stone cottages, some of which are being offered to the public on a freehold shared ownership basis. Next to the hotel and cottages is the new Machrihanish Playpark, featuring a wide variety of state-of-the-art play equipment including a play pirate ship with many decks, two steering wheels, a slide, a climbing net, a staircase and a hammock. There is also an equestrian centre nearby, as well as glorious sandy beaches.

The Mere is steeped in history. A historic hall can be traced on the site going all the way back to 1086, while the New Hall was built in 1834 – 100  years later, the estate was bought by Edgar Hart and turned into a country club, and has continued to develop ever since. The course was designed by James Braid and the first club professional was George Duncan. The character of the course has remained largely unchanged since Braid first designed it. It measures 6,882 yards and carves its way through hundreds of towering trees, which frame each and every hole. There are also flowering banks and some beautiful views of the Mere Lake, with water in play on several holes. It is a course that will challenge golfers of all levels, but will leave you wanting to come back for more. There is a driving range, two-tier pitching area and putting green.  All rooms are equipped with flat screen televisions, Sky TV, wi-fi and iPod docking stations, with cuddly meerkats provided for young guests. The spa features  six luxury treatment rooms, a heated indoor swimming pool and a fully-equipped gymnasium. The Blue Planet Aquarium, Cheshire Oaks designer outlet, Tatton Park and Legoland Discovery Centre are all within easy reach. The Mere Resort Review.

Slaley Hall is part of the Q Hotels group, and that means before you book your break you know that you are going to experience a venue that will be perfect for families – all their hotels come with a fine choice of facilities and Slaley Hall is no exception. It is located not far from Hexham in beautiful Northumberland countryside. There are two courses, with the pick of them being The Hunting, which has played host to the European Tour and has been labelled “Augusta of the North’ - that may be pushing it slightly but it is a magnificent course, with fairways lined by trees. You need to be accurate from the tee. The Priestman offers glorious views at the Northumberland countryside and is more exposed to the elements than its sister. The hotel is a spectacular building that features 141 bedrooms as well as a choice of lodges located within the grounds. Guests have access to a state-of-the-art health club, with a well-equipped gym and heated swimming pool. There is also a spa.  There are two restaurants, Hadrian’s Brasserie and The Claret Jug, and a huge range of outdoor activities, including fishing, archery and clay pigeon shooting. Slaley Hall Trip Report.