The "Autumn swing" on the TP Tour commenced at the Berkshire Golf Club on 9th September, where a field of top 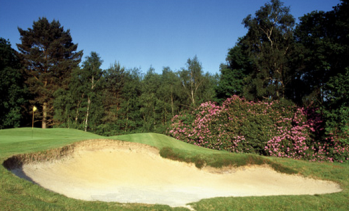 professionals were in action. The stunning Blue course was in fine shape for the event, the course has recently been selected in the World's Top 100 by a panel of golf architects for the highly respected Golf Course Architecture magazine.

The winner, with a great score of 65 was Ben Cooper from Bishops Stortford, firing 6 birdies to overcome William Harrold, by a single stroke.
On 23rd September the Tour made its first visit to Sandy Lodge GC in Middlesex, a 100 year old inland links designed by the legendary Harry Vardon. Sandy Lodge is a gem of a course which has stood the test of time, and has been chosen by the R&A to host Open Championship qualifying in 2015. The TP Tour players were all unanimous in praise for the course and the facilities, with two players shooting a new course record 65 - Dorset's Lee James and Steve Lewton, from Woburn, who is now a top competitor on the Asian Tour.
A very high standard of play was in evidence by spectators and supporters on the day.
Lewton won the event in fine style, sinking a 12 foot birdie putt on the 4th play off hole after a tough battle with James, the former Amateur Champion and Challenge Tour winner.
The Tour looks forward to a return to Sandy Lodge - a must play venue for all serious golfers.
The Berkshire is also one of the TP Tour's featured Pro am venues. The August Pro Am was in support of the On Course Foundation Charity, and the winner was Liam Bond with a superb round of 62 ! The Tour has conducted a series of world class events this season, with many European Tour stars competing. The next pro am is being held at The Buckinghamshire Golf Club on 21st October.
The Grand Final of the series for the leading amateur teams is being hosted by the magnificent Bearwood Lakes GC on 6th November. The ultimate winners will win tickets for the 2014 US Masters! Courtesy of Augusta Golf Tours.
The 21st October tournament is the last opportunity to qualify for the Bearwood Lakes event, all enquiries contact [email protected]
The next TP tour event is at North Hants GC on October 8th, a betterball challenge, open to any combination of Professionals and Cat 1 Amateurs.
Further info on the Tour can be found on our website www.tptourseries.com Or by calling the tour office 01628-566553
Image Credit - The Berkshire Golf Club