Titleist have announced the launch of the new 714 series CB and MB irons, a high performance, tour-proven forged blade that provide maximum shot control with improved address profiles and enhanced feel through the turf. The new 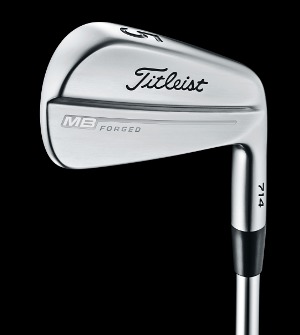 The new CB and MB 714 Series irons maintain the core design fundamentals that have resonated with highly skilled, traditional bladed iron players since their initial launch in 2009, delivering advanced shot and trajectory control with classic solid feel and contemporary looks. The Titleist Golf Clubs R&D team has made improvements to the sole, leading edge and hosel of the new models for smoother ground interaction and a more confident visual at address.

“When we ask tour players what we can do to improve the CB or MB irons, their immediate reaction is always the same: Don’t do anything. It’s a welcomed challenge for our R&D team,” said Steve Pelisek, General Manager, Titleist Golf Clubs. “Through advanced computer modelling and extensive player testing we’ve been able to really fine tune these new designs and provide more performance. The new CB and MB models allow players to work the ball high and low and left and right with a solid blade feel, and now they look better at address and perform even better through the turf.”
Forged from 1025 carbon steel, the new Titleist CB and MB irons feature  constant blade lengths, a design atht os preferred on tour with minimal progressive offset for maximum workability. Compact shapes with precise CG locations and traditional tour lofts deliver the proven flight, feel and shot-making confidence that have made CB and MB the choice of many of the world’s best players.
The new CB irons feature an optimised shallow cavity-back design with an inner cavity muscle behind the impact area for solid blade iron feel. MB is a classic muscle back forged iron, delivering feel from muscle back weighting positioned behind the sweet spot.
Titleist have contuinued to improve the sole design of both CB and MB features resulting in a pre-worn leading edge for 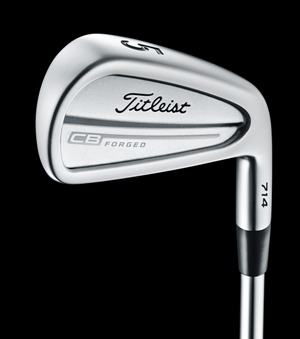 crisp ground contact and less digging at entry, and a smooth sole width progression as you move through the set to enhance ground interaction. The slightly wider CB sole now features increased front-to-back camber for better turf release and playability from a variety of attack angles.
The new CB and MB models have an improved address profile with a slightly straighter leading edge that promotes a square setup and a new hosel-to-leading edge blend that creates less visual offset.
The profile in the CB #8, #9 and P irons has also been modified by reducing the PAR (heel) height for a more compact shape.
CB and MB feature a Tour-preferred satin finish that reduces glare and accentuates the toe and topline profile for easier alignment of the face and confidence at address

The new Titleist CB and MB irons will be available in golf shops worldwide beginning November 8th. Both models have a RRP £114 per club/steel.

More than 75 players across the worldwide professional tours have already added new CB and MB irons to their bags, including Matteo Manassero (MB), Tim Clark (CB), Geoff Ogilvy (MB) and Graham DeLaet, who played a mixed set of CB and MB irons in registering top-3 finishes at The Barclays (T-2) and Deutsche Bank Championship (3rd).
Gregory Bourdy put a mixed set of the new CB and MB irons in play for the first time at the European Tour’s Wales Open, where he birdied his final three holes to win by two shots. John Riegger, playing the new MB irons, birdied three of his final four holes, to win the Champions Tour’s Boeing Classic.
“The new irons are fantastic, it just has that kind of classic look to them, you put them down and you feel like you know you’re going to hit them straight,” said John Merrick, who finished T-6 at the Canadian Open, the first week he put the new MB irons in play. “They go through the turf excellent.”
“They look great,” said Ben Kohles, who put the new CB irons in the bag the first week they were available at AT&T National. “They have a little bit of a different sole to them, very slight, but you can tell that through impact is a little bit more forgiving.”
Other players that have put the new CB models in play include: Greg Chalmers, D.H. Lee, Brett Rumford, Anders Hansen, Brooks Koepka and Tom Gillis. Those also playing the new MB models include: Rafael Cabrera-Bello, Marc Leishman, Bud Cauley, Soren Hansen, Jimmy Walker and D.J. Trahan.

Titleist announce the launch of new 714 AP1 and AP2 models

How the Pro V1 is made (VIDEO)