Never has the European Tour enjoyed a start to season like 2013. Speculation has swirled about Rory’s deal with Nike. The Woods v McIlroy rivalry has reached new levels. An Englishman - Justin Rose is now  being tipped to join the major winners and massive things are expected of him this year. The European Ryder Cup Captain will be announced and all this will happen in the deserts of the Middle East.

The Desert Swing on the European Tour is now the curtain raiser to the world of golf each year. The PGA Tour will argue that honour should go to it’s ill fated Tournament of Champions and Sony Open in Hawaii and the European Tour started in similar vain with their very own Volvo Champions Tournament, but it is the arrival of the Abu Dhabi championship that has set the golfing world alight.

The Desert swing is made up of three events – The Abu Dhabi Championship 17- 20 Jan, The Qatar Masters 23-26 Jan 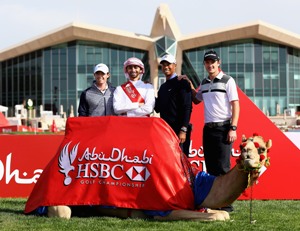 and The Dubai Desert Classic 31st Jan -4 Feb. These tournaments have gradually forged themselves a distinct position on the golfing calendar and with a combined prize fund of $7.7M in addition to appearance fees they now attract the worlds best players.

Thursday will see the start of the Abu Dhabi HSBC Championship and with it the first encounter of Woods and McIlroy of the 2013 season. The rivalry has taken on a new dimension following Woods re-emergence and rise to No.2 in the World and McIlroy’s stunning end to the 2012 season which saw him win the USPGA and 2 major PGA Tour events. Increasing the link between Woods and McIlroy has been Nike’s signing of the Northern Irishman for a deal reportedly worth upwards of £150M.  The golfing world will watch these two giants of the game with baited breath on Thursday hoping that the golf can live up to all the hype and write another memorable chapter in the players rivalry.

Joining the World numbers one and two in the field are previous winners Robert Rock, Paul Casey and Martin Kaymer. In addition a host of the world’s top players will compete for the trophy at the Abu Dhabi Golf Club including Ernie Els, Justin Rose, Matteo Mannesero, Peter Hanson, Jason Dufner, Padraig Harrington and Colin Montgomerie.

The 2nd stage of the Desert Swing will visit Qatar for the Commercial Bank Qatar Masters. The event has been a fixture on the European Tour for 15 years and was first won in 1998 by Scotsman Andrew Coltart. Headlining the field will be World No.9 Jason Dufner, Open Champion Ernie Els and World No.4 Justin Rose who commented on his chances:

“My game’s in a good place right now and I’m playing well on all types of golf courses. I really enjoy playing desert courses like Doha Golf Club as it requires lots of imagination and shot making ability, which suits me. I believe I can win as I’ve been performing consistently for a while now.”

On the 31st January -4th of February the European Tour will complete it’s 2013 Desert Swing at the Dubai Desert Classic. It is the oldest of the three events and was first played in 1989 and has pioneered the way for the golf in the Middle East.

The Desert Swing on the European Tour certainly seems to be gathering momentum and attracting more and more top players including those from the PGA Tour. With the Mcilroy v Woods show in town the Desert Swing has certainly arrived with a bang and let us hope the fireworks are still to come!