Apologies, now that that’s out of the way we can concentrate on the serious tasks in hand like Rory McIlroy’s new solid gold Nike golf clubs or Robert Rock’s doctor-in-an-American-soap hairdo or even the fact that no one has noticed Tiger Woods has been replaced by an all-smiling cooperative imposter whose nemesis is also his BFF!

Abu Dhabi HSBC Golf Championship will see half of Europe’s victorious Ryder Cup team tee it up on the monster 7,600 yard course to vie for the €336,725 first prize.

No doubt all eyes with be on Rory and his new clubs glinting in the desert sun and how they will affect his game, if at all. Every minor miscue and lip-out will be put down to ‘a period of adjustment’ and there’ll be many commenting and the foolishness of youth; the impulsivity and dare I say greed which effected McIlroy’s equipment change. I for one feel it won’t affect his game at all.

With his new best friend Tiger in tow, Rory should settle into the swing of things pretty quickly. Don’t be surprised however if Rors makes an early exit from the tournament however, as the week is an ice-breaker; a meet and greet with the media as much as it is a chance to practice in competition. Let’s face it, he’s not in need of the prize money. Anyway, he’ll be high-tailing back to Australia to see his missus play the tennis. 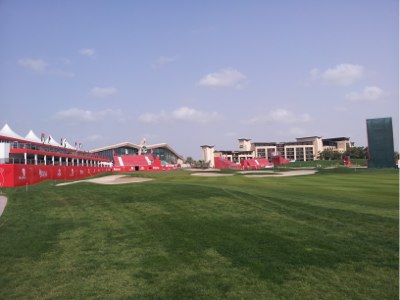 When the pre tournament furore finally settles and the players are given a chance to settle into the business of golf, who can we expect to see walking up the 18th in the final grouping?

One stat stands out: GIR. Those who fail to make the undulating greens in regulation won’t lift the stunning trophy on offer.

Paul Lawrie has found a new lease of life since his renaissance in 2012 and his showing on the final day at Medinah showed his prowess around the greens. However, though he currently leads the early GIR stats of 2013, his putting let him down badly last week in Durban. If Lawrie can find his touch this week he could have a big say come Sunday.

Thomas Bjorn has started the season in fine fettle and with the rumours of his interest in the Ryder Cup Captaincy now put to bed, there’s no doubt the gravel voiced Dane with the soft hands has the credentials and experience to be in the shake up. With form at the track, and a little more consistency off the fairway Bjorn should be in the shakeup.

The young Matteo Manassero can no longer be considered wet behind the ears now that he has cut his teeth on tour for 3 years now, notching a win per season. Straight off the tee and hitting almost 70% of Greens in regulation Manassero definitely has the long game to challenge but his chances will determined by his temperament on the short grass. Incidentally, with the 2014 Ryder Cup being such a prominent subject this week, this guy will definitely be donning tartan trousers in Gleneagles in less than 2 years time and his route to the top begins here. Expect a good year from the young Italian.

If you’re brave enough to sit up and watch the live coverage early on Thursday morning you’ll be treated to the McIlroy/Woods/Kaymer show interrupted by brief glimpses of 123 other players with caddies and golf clubs, but such is the interest in the world’s top two players this has to be expected. However, come the weekend, I’m confident we’ll see our fair share of the field, not least the three golfers mentioned above.

2013 could prove to be a vintage year; a year which I’ve no doubt will see the relentless rise of McIlroy. But I’m marking your card.

Manassero could be the next Rory.

And he’ll finally get rid of that ‘Kinder’ hat. And kinder label.