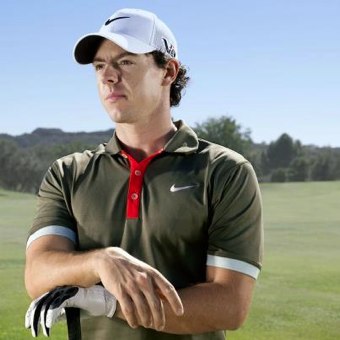 Possibly the worst kept secret in golf is now official.

Nike Golf today announced that Rory McIlroy will 'join the family' playing a full set of Nike golf clubs and wear Nike head to toe at an extravagant press conference in Abu Dhabi .

Despite recent rumors and speculation of the deal, reports of $200-$250 million over 10 years, Nike didn't comment on the exact terms as per company policy but Rory commented that 'I play for titles not money'.

McIlroy is making the first manufacturer change of his six-year career.

"I visited The Oven and I was seriously impressed with both the craftsmanship of the Nike club engineers and how much R&D and product innovation goes on there," said McIlroy.

"I've been blown away by the attention to detail when it comes to product."

During the press conference Rory talked about hitting his new Nike VR_S Covert driver further than ever, carrying it over 300 yards and a ball speed up to 180mph.  He also commented on testing throughout Christmas and how well he's hitting the ball and his seamless transition to the new clubs including the Nike Method Putter which he feels extremely comfortable with. You can watch the full press conference below.

Rory will tee it up this week in his season debut at the Abu Dhabi Championship alongside Nike stablemate Tiger Woods in what is set to capture the golf audience worldwide when the Tournament gets underway this Thursday.

Rory McIlroy - In the Bag