What is Wrong With Golfers Having a 54 Handicap?

BY THE end of this year the World Handicap System will be up and running. In theory, it means that your handicap will work wherever and whenever you play. But even before it all comes into force globally it has attracted widespread criticism.

The main bone of contention surrounds the decision to increase the maximum handicap to 54. Purists simply hate the idea that somebody who hacks their way around a golf course will now be able to have an official handicap that allows them to drop three shots on every single hole and be competitive.

I simply don’t get what the fuss is all about. Personally, I love playing with enthusiastic beginners and giving them some tips about how they may be able to improve their games. And let’s face it, everybody wants to improve.

Anybody can pick up a tennis racket, head out onto a court and attempt to emulate the likes of Rafa Nadal and Roger Federer while hitting ball after ball into the net or beyond the tramlines.

Not everybody who owns a snooker cue is capable of making a century break. On the contrary.  And good players give beginners a head start in order to make things competitive.

The most popular sport in Britain is football. People of all shapes, sizes, abilities and ages play the game. And, generally speaking, they compete against people of as similar standard. What fun would it be to go out every week and find yourself on the wrong end of a 17-0 hammering? None at all. 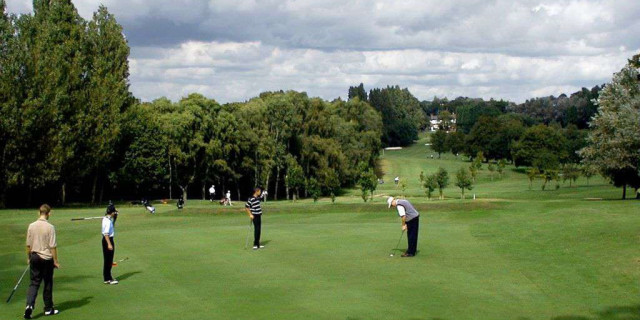 It is a fact that there are many people who don’t have the time to play golf every week, but they do enjoy playing the occasional round. And why shouldn’t they be provided with an opportunity to compete on level terms with single-figure golfers? Apart from anything else, the chances are that they will not want to play in competitions. These are men and women who will be looking to go out and play with like-minded friends and work colleagues. Does it really matter if they take 120 strokes to negotiate 18 holes? Of course it doesn’t. What is more important is that they enjoy themselves.

No matter what standard we play to, there is always a shot that brings us back. It may be a drive that soars into the blue yonder with a touch of draw; it could be a tee-shot at a par three that gives us a birdie chance; or it could be a huge raking putt that breaks two ways. Those of us who care about the future of the game should actually be rejoicing in the fact that occasional golfers will have a chance to measure themselves against par with a realistic handicap.

What should concern us more is that these people understand etiquette. Do they replace divots? Do they rake bunkers? Do they understand the rules? And because they are going to take longer to play 18 holes, do they let quicker players through? Do they know what to do when they lose a ball? Do they know how to drop a ball under penalty?

I believe that 54-handicappers should be given a questionnaire to complete when they turn up in a group. It would be simple enough to arrange and would only need to include a few simple questions, just enough to ensure that they understand both the rules and the etiquette of the game.

The new handicap system comes into effect in the UK in November, with handicaps based on the eight best scores from a golfer’s last 20 competitive rounds, and let’s not pretend that it is going to be simple. How does an occasional golfer find their eight best scores from 20 competitive rounds, because the chances are that they will not be club members? It means that the likes of Golfshake is going to have a big part to play.

This is how the R&A attempts to explain the changes, and as you read it please try to remember that the idea is to simplify things:

Simplified? Easy to understand? Inclusive? Hmmmm…. the jury is still out. This is a subject we will definitely be returning to. But in the meantime, please remember that everybody has to start somewhere, and there is every possibility that many of these 54-handicappers may well be bitten by the bug and decide to take lessons, learn how to play properly and join their local golf club. And if they don’t, does it really matter?

The World Handicap System - All You Need to Know