Why the Dunhill Links Deserves a Bigger Profile

The best players on the European Tour have converged on three of the most beautiful links courses ever designed by a mortal hand. I’m talking, of course, about the Alfred Dunhill Links Championship which takes place at St Andrews, Carnoustie and Kingsbarns, three of the finest links tracks in the world. Yet for what should be its obvious top reputation, the Dunhill Links isn’t especially high stature. True, it’s a European Tour event and always attracts an impressive field, but I’ve never heard it mentioned in the same breath as, say, last week’s BMW PGA Championship, for instance, or other big but not major events in the US, like the Memorial or the late Arnold Palmer’s Invitational at Bay Hill. To me, however, the Dunhill Links Championship is one of the most refreshing and enjoyable events in the golfing calendar. Here’s six reasons why the competition deserves more hype.

The first reason why the Dunhill Links deserves a higher profile is simple: the courses! It beggars belief that a tournament that spans over not one but two tracks on the Open Championship rota and a course that is consistently voted among the best of its kind in Europe isn’t more hyped. Furthermore, and like the Masters, the courses that the Dunhill is played over stays the same every year, creating a really unique atmosphere. Firstly, there’s Carnoustie, a wonderful, windswept beast of lurking burns and scenic gorse, whose drama and class was revealed in the 2018 Open. In their next two rounds before the unusual 54-hole cut, players also compete at St Andrews, which needs no introduction, and the magnificent Kingsbarns, my favourite course in the world. As if that wasn’t enough, the final 18 holes see the players once again return to the Old Course. It’s hard to think of a more spectacular set of holes in a tournament anywhere else on the globe.

Compared to the sunny skies (well, at least in theory!) of summer, the more temperamental weather of September, especially in Scotland, can, from one perspective, seem drab. But while the Dunhill isn’t usually blessed with the rays, the season that it’s played in has its own unique charms. This is a links competition don’t forget and what self-respecting links tourney is complete without a dash of wind and rain? Particularly for the players who ply the bulk of their trade in the US, pro golf can quickly degenerate into a rather one-dimensional game; perfect weather, perfect fairways, perfect swings – yawn! On the quirky and challenging links courses of Carnoustie et al. pro’s games are really stretched as they’re forced to adapt to changeable conditions and unusual lies. The game as it’s played in the Dunhill is far more interesting than the ‘target golf’ that passes for stock on, especially, the PGA Tour. The inclement late September weather only adds to this.

Related to the previous point about the weather, the September setting of the Dunhill also gives it another advantage. Unlike many other events, which are sandwiched awkwardly between the majors, and thus often overshadowed by their larger, more important brothers, the Dunhill has a relatively roomy place in the calendar. This only adds to the puzzle of why it has yet to achieve what I feel is its properly large amount of hype, but it certainly helps it to stand out and feel like a significant event in its own right. Moreover, its position at the end of the season means that it’s one of the last chances to see many of the world’s top players in action before they retire to their million-dollar mansions and expensive practice ranges to hone their games for the coming year. Why isn’t the Dunhill more A-list? What more could a tournament need?!

In most professional golf tournaments, the pro-am has the flavour of a bit of an afterthought, an add-on which is subordinate to the main event. In truth, this old hierarchy isn’t totally dispelled in the Dunhill, but the ams here get much more attention than most. And a good thing too, because the amateurs who rock up for the Links Championship are usually A-list. In recent years, viewers have been treated to the sight of Hugh Grant, Justin Timberlake, Michael Phelps and many more, slamming down tee pegs and swatting drives on the links. This year promises another cracking field!

It’s not just the amateurs though who are high rollers in the Dunhill Links: the pro field is also a good un too. For many of the reasons already outlined, the competition is a lodestar for many of the European Tour’s top players, particularly the British contingent, many of whom were reared up on links golf. Heading the billing this year is current world number two and form horse Rory McIlroy, who is among the favourites to triumph in the comp. With McIlroy playing more and more golf stateside as his career enters its defining stages, he’s becoming tougher to catch sight of on a course in the UK. The Dunhill Links offers a great opportunity to see the ‘wee Irishmon’ in action or tackling a good old-fashioned links test if you’re watching on TV. 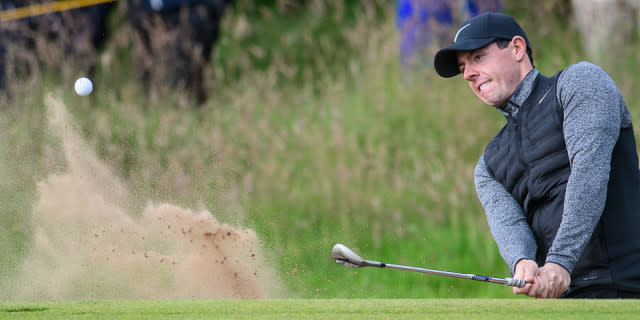 I’ve already covered this in part during the discussion of the courses, but St Andrews is about more than just the Old Course, however hallowed and majestic it might be. The town is equally spectacular, a sensational cultural and historical spot in its own right. There’s just something about it, cut onto the side of a cliff, complete with a famous beach (the site of that world-renowned training scene in Chariots of Fire), wonderful scenery and fleets of beautiful old buildings – it’s enough to send a tingle up your spine just catching a glimpse of it on TV! If you’re lucky enough to visit the Auld Grey Toon in person, the sense of the sacred is only amplified. It’s a magical place to be, and the fact that the Dunhill returns to it is enough to give it top-flight credentials for me.

The Experience of Playing the Old Course at St Andrews