Jordan Spieth cemented his place alongside the legends of golf on an unforgettable Sunday at Royal Birkdale, joining Gene Sarazen, Ben Hogan, Arnold Palmer, Jack Nicklaus, Gary Player, Tom Watson and Tiger Woods as the only players to win the Masters, U.S. Open and Open Championship, following an extraordinary back-nine turnaround to secure the Claret Jug after a maelstrom of genius that will surely be remembered as one of the most dramatic finishes in major history.

That is some club to be part of. And all of this has been accomplished days before the man from Dallas reaches his 24th birthday. It’s easy to be accused of overstating his comparatively tender years when discussing Spieth, but there is no downplaying the monumental achievement of being a couple of weeks removed from potentially completing the career Grand Slam at an age when many are seeking a purpose in life after awakening from the often-drunken stupor of university or college.

Jordan’s intent and focus is clear for us all to see, and that is to become one of the game’s all-time great players. That is what we are in the midst of witnessing, one young man’s journey towards immortality, and it’s a rare thing. A special thing. Something to be celebrated and embraced. And Sunday in the north-west of England was a thrilling encapsulation of why it has been made possible. 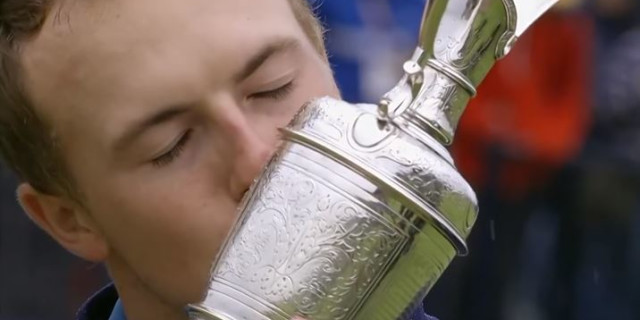 It’s certainly not a result of his proficiency off the tee – mediocre at best – or his much-improved iron play that is hugely underrated, and even his seemingly magical touch from longer distances on the greens, but it is a consequence of something less tangible. His mind. That is what separates Jordan Spieth from the seemingly more refined and powerful contemporaries of his generation.

The ability to transform what had looked to be an inexorable slide towards a golfing disaster, sustained and arguably more psychologically damaging than his 12th hole of torment experienced at Augusta National last year, is something truly unique. It was a dire situation dramatically retrieved over the closing third of the final round in astonishing fashion that displayed the indelible hallmarks of a great sportsman. And it won’t go unnoticed by the rest.

Dustin Johnson, Rory McIlroy and Brooks Koepka are the apparent archetypes of what a modern professional golfer should be, but Spieth has transcended those stereotypes. Those players can intimidate through distance and towering approaches, seemingly having the power to bring any course to its knees. The young Texan is a striking opponent for an altogether different reason, one that is less discernible and rarely attained. It’s more daunting as a result.

Spieth is a competitor at heart more than he is a golfer. It’s a trait reminiscent of the game’s most prolific champion, Jack Nicklaus, who always viewed golf as being his vehicle to competition, and Jordan is of a similar mould. He possesses a deeply ingrained will and determination, attributes that carried him through yesterday. Even more decisive is an obvious gift for timing, doing the right things at the crucial moment. Whether that be the 18th hole birdie to conclude the third round and with it securing a three-shot lead, or the breathtaking eagle on the 15th on Sunday that seemed to even catch him by surprise.

Those are the intangibles that Spieth has. Few golfers – and sportspeople – have the knack of timing. It may be a result of that grittiness, an ingrained self-belief or sense of the occasion, but he is an extremely perceptive player. He understands situations and capitalises on them. We can’t statistically identify those qualities, but they are evident within the game and psyche of Jordan. And that most of all is why he is celebrating today being the Champion Golfer of the Year.

Well played @JordanSpieth, congratulations on a magnificent achievement. Make sure you take care of the Claret Jug! ???? #TheOpen pic.twitter.com/IWUtQR19ba

It didn’t seem likely when his drive on the 13th was so wayward that Spieth grabbed his head in disbelief. There was an undoubted degree of good fortune in finding the ball in the wildest parts of this superb links, and the ensuring rules discussion lasting almost 20 minutes was among the most surreal situations we’ve seen in the game’s oldest championship. Taking him onto the driving range and before the striking Titleist equipment truck – a welcome bit of advertising – it was the final round of the Open as directed by David Lynch, creator of strange screen sculptures such as Blue Velvet, Mulholland Dr. and Twin Peaks.

He somehow recorded to make a courageous bogey, but had fallen one shot behind playing partner Matt Kuchar. Somehow, when becoming the chaser, Spieth hit the reset button and nearly holed his tee shot on the 14th. It was just the first part of an extraordinary hour of golf, followed by the eagle on 15, a sensational birdie on 16, and another on the 17th, blowing his admirable compatriot away.

The one that won it. #TheOpen pic.twitter.com/RfrJdByJXP

Facing the still vivid memories of his collapse in the Masters last year, and the struggles of a final round that was falling away, Spieth rescued the situation with an exhilarating display. Citing caddie and companion Michael Greller as being a calming and inspirational influence, the champion explained afterwards: “(He) did a great thing today. He said, "Do you remember that group you were with in Cabo (which included Michael Phelps and Michael Jordan) last week," in a picture that I posted. He goes, "You belong in that group." We walked off 7 tee box, and he made me come back. He said, You're that calibre of an athlete. But I need you to believe that right now because you're in a great position in this tournament. This is a new tournament. We're starting over here.”

Like Nicklaus, a man with an astonishing 19 second places in the game’s four most important events, Spieth has tasted both the ecstasy and agony of major championships. He has won three times, but has also been a runner-up on three further occasions, twice in the Masters and once in the PGA, not to mention his near-miss at St. Andrews two years ago. That is a complete education at an early stage that will carry him to future success as he seeks to further write his name in history.

Jordan Spieth is the rarest of gems, and one that we should marvel at.