Have you ever in your life seen anything like that? Jordan Spieth is the 2017 Open champion but even he may not know how he managed to achieve it. He began the final round at Royal Birkdale with a three-shot lead over fellow American Matt Kuchar, but for 13 holes he tried everything he knew to hand the Claret Jug to his playing partner. 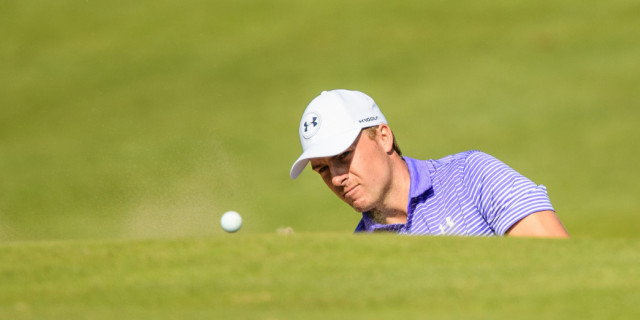 It was bad enough that he dropped three shots in the first four holes to find himself tied with Kuchar, but what happened at the 13th hole defied belief. With Kuchar in the middle of the fairway, Spieth let rip with a driver, fell back onto his right side and sliced the ball fully 120 yards wide of his intended target. For a while it looked like he may have to wander back to the tee and reload but eventually his ball was located. However, there was no chance of him moving the ball so he declared it unplayable.

Eventually, he found a spot to his liking and, playing his third shot, gouged the ball towards the green. It came up short and his next shot wasn't one of his best either. There was the prospect of a three-shot swing, but Kuchar missed his birdie putt and Spieth somehow managed to force the ball into the hole for a remarkable bogey. It took them almost 30 minutes to play the hole, and Spieth apologised to Kuchar for keeping him waiting so long.

Kuchar was one in front. But not for long. At the par-three 14th, Spieth hit a stunning iron shot that nearly found the bottom of the hole. Kuchar parred and when Spieth holed out they were level again. Where the 23-year-old found the mental fortitude to produce such a shot after playing so poorly for so much of the round is difficult to fathom. But he wasn't finished yet.

The 15th is a par five. Kuchar duly rolled his ball to tap-in range for a routine birdie. Spieth was on the front of the green in two and faced a long, snaking putt. He holed it for an eagle. The man who had taken 37 shots to Kuchar's 34 on the front nine was back in front again.

Next up was the 16th, a difficult par four that had caught out players all week long. Once again, Kuchar made par. Spieth was fully 30 feet from the hole in two. You've already guessed it. In it went for another birdie. Then came the par-five 17th, where both players missed the fairway with their drives and were unable to find the green in two. Kuchar hit an average pitch to about 15 feet, while the 23-year-old Texan left his third seven feet away. To his eternal credit, Kuchar somehow managed to force in his birdie putt. And Spieth followed him in. Naturally.

He had played four holes in five under par and stood on the 18th tee with a two-shot lead. Kuchar was forced to go for broke and hit a glorious drive, while Spieth hit an iron. Spieth duly found the green in two and Kuchar, going for the flag, hit his approach into a greenside bunker. He had to hole it to have any chance at all, but the ball was plugged and he had a horrible stance, with one leg outside the trap. When his ball rolled 35 feet beyond the cup the engraver was able to start his work, and the name on the trophy, the Champion Golfer for 2017, is Jordan Spieth.


But how did he do that? How did a man who, for much of the final round couldn't hit a barn door, manage to turn it round in such sensational style?

He is now just one title away from a career Grand Slam, having won The Masters and US Open in 2015, and only Jack Nicklaus has achieved such a feat at an earlier age. He will now head to the US PGA Championship next month believing that he can become the youngest man in history to win all four of golf's majors.

Rory McIlroy was meant to be the next man to win all four, but it seems certain that Spieth will beat him to it. The Open was yet another nearly story for the Northern Irishman. A horrific front nine on Thursday and a series of shots that were frittered away in the third round did the damage. He shot a 67 to finish on five under par, in a tie for fourth place with Rafa Cabrera Bello. But McIlroy is not interested in fourth place. And yet again, just when it looked like he might be ready to mount an unlikely challenge, his hopes came undone when he lost a ball at the 15th and walked off the green with a six. He did eagle the 17th but by then it was all a case of too little, too late.

For much of the day it had looked like Haotong Li, of China, might be the unlikely champion. With Spieth frittering shots away like confetti, Li produced a stunning final round of 63 to move to six under par. He was advised to hang around, just in case, but when Spieth eagled the 15th, he knew his chance was gone.

And the fairytale continues for England's Matthew Southgate. He played brilliantly at the Irish Open to secure his place at Birkdale and the man who beat testicular cancer carried on where he left off at Portstewart, shooting a final round of 65 to finish tied sixth with Alex Noren, Marc Leishman, Branden Grace and US Open champion Brooks Koepka. Defending champion Henrik Stenson was a shot further behind, and applauded the gallery as he walked from the 18th green. The giant Swede has enjoyed every single moment of his time as Open champion.

Afterwards, Spieth said: "I don't know how I made five on 13, I don't think I'll ever know, it's like I got away with murder. What a class act Matt is. I took about 20 minutes to play one of my shots today, and Kuch is such a champion that he smiled and took it all in his stride. Thank you very much, what an incredible honour it is to win.

"This is a dream come true for me, absolutely. I was able to drink some wine out of it when Zach Johnson won it a couple of years ago, and I was told that was bad luck – it was looking like that for a while there."

Kuchar paid tribute to his fellow American. "Leading with five holes to play, I then played the next four in two under and lost two shots to Jordan. It was impressive stuff and when someone does something like that, you just have to tip your cap and say well done."