10 Great UK Golf Resorts You May Not Know

WHEN you are looking to book a golf break, whether it be for a small party or a large group, one of the most difficult things is finding a venue that is a little bit different. One of the most over-used descriptions is a “ hidden gem” - let’s face it, if it was hidden, nobody would ever be able to find it, would they? And in this era of social media and the internet, there really is no longer such a thing as a hidden gem. But there are plenty of golf resorts out there that, unless you live within a few miles of them, most people may never had heard of them. There are plenty of great courses and hotels that you may not know exist and here we tell you about just 10 of them. They all boast terrific hotels, great food and excellent golf courses.

Morley Hayes has won a number of awards. The four-star hotel has 32 rooms, every one with its own private terrace or balcony looking out over the golf course and the Derbyshire countryside. Each room has flat screen satellite TV, wifi and high-speed internet access, and there are also two bedrooms with disabled facilities in the bathrooms, including access for a wheelchair and walk-in shower. There are two restaurants and a spike bar. The Dovecote is regarded as one of the finest eateries in Derbyshire.  The jewel in the crown at Morley Hayes is the Manor Course, a magnificent parkland layout that has a par of 72 and measures 6,726 yards from the back tees. The nine-hole Tower Course is a par 30 featuring three short par fours and six par threes.

Located in North Wales, Trefloyne Manor features a fine 6,649-yard course. Tucked away in the Ritec Valley, tree lined and overlooking Tenby and the National Park of Pembrokeshire,Trefloyne Golf Course really is a memorable experience. It is tree-lined, with the tee shots at the first, second, 13th, 14th and 15th requiring pinpoint accuracy. The signature hole is the par-three 12th. It may only measure 136 yards  but it is a thing of rare beauty, played from an elevated tee over an area of trees and shrubs to a small green in the valley. There is no room service but the Manor will happily provide in-room picnics with cured meats, olives, bread, cheese and a bottle of wine, and all stays include a full Welsh breakfast. It features a glorious sun terrace, ideal for enjoying a relaxing drink after playing 18 holes.

Set in the heart of the Sussex countryside, Sedlescrombe Lodge overlooks the first and 10th tees and features just 20 bedrooms, so is perfect for a small society. The rooms have pocket-sprung mattresses, large baths with twin basins, air conditioning, television and free wifi access, while the King rooms have corner baths and balconies that overlook the course. The bistro serves breakfast, lunch and dinner and, weather permitting, a barbecue on the terrace every Sunday during spring and summer. The Great Wood parkland golf course measures 6,300 yards and is a par 72 set in Battle Great Wood, so there is plenty of nature to enjoy. The front nine is fairly open, but you need to find the fairways to score well on the back nine. There is also a nine-hole course, Little Wood, with holes measuring between 80 and 180 yards.

Macdonald Linden Hall Golf and Country Club was built as a country house by merchant and banker Charles William Bigge in 1812, and nestles in 450 acres. The rooms all have their own individual identity and offer terrific levels of comfort and luxury. The Dobson Restaurant has two AA rosettes and serves Scottish beef, Scottish lamb and freshly caught white fish. There is also a more relaxing atmosphere in the Linden Tree pub, which also serves food. Linden Hall’s menus offer organic food and drink. The parkland course was designed by Jonathan Gaunt. It is a par 72 measuring 6,846 yards from the back tees, with water coming into play on nine holes. The signature hole is the par-three fourth, played over water and surrounded by trees, and the par-five 13th is a memorable risk-and-reward par five. There are views of the Cheviots, Coquet Island and the glorious Northumberland coastline

Old Thorns began life as two 17th-century farmworkers cottages and has come a long way since. Sitting in 400 acres in the South Downs National Park, it is now a four-star hotel, boasting a spa with 15 treatment rooms, indoor swimming pool, gymnasium, bubble pool, sauna, steam room and 18-hole golf course. It has 151 bedrooms, 14 function rooms, a gymnasium, spa and health club, conference centre and 10 eco-pods, also known as clamping or camping pods – essentially, they are luxury wooden sheds. Old Thorns also has a champagne and cocktail bar, a sports bar with regular live entertainment and the Kings restaurant. The tree-lined golf course was designed by Dave Thomas and Peter Alliss, the latter of whom is club president. The course is set amid the rolling hills of Hampshire and features small, undulating greens, plenty of bunkers and several water hazards. You will want to stop on several of the elevated tees to take in the views of the surrounding countryside. It measures 6,461 yards and is a par 72.

The Rolls of Monmouth golf course is situated in the shadow of the magnificent Manor House, once the home of Charles Stewart Rolls, the founder of Rolls Royce. It was built in 1767 and was owned by the Rolls family until 1987, having been extended several times over the decades. A parkland layout situated in Monmouth, the course measures 6,733 yards and offers players spectacular views of the Welsh hills. The key to scoring well here is accuracy from the tee. Accommodation is provided in a cottage that sleeps eight, plus two lodges that each sleep four people, and all come with specially-tailored breakfast and evening menus.

Durham is one of the beautiful parts of England, with miles of rolling countryside and spectacular views. It is also home to Ramside Hall, a four-star hotel and spa that also boasts two golf courses. Set in 350 acres, It has 127 bedrooms and suites, along with a state-of-the-art gymnasium and a wonderful spa that offers a vast range of treatments. Food is served at Pemberton’s Carvery, the Rib Room Restaurant and the Pan-Asian restaurant. The Prince Bishops course is a par 72 measuring 6,851 yards and features views of the stunning Durham Cathedral, which dominates the landscape. Designed by Jonathan Gaunt, the Prince Bishops features 16 water hazards which come into play on 10 holes. It also has nine doglegs, so strategy is key. The parkland Cathedral Course meanders over rolling countryside between the villages of Belmont and Pittington, with some serious changes of elevation. Gaunt describes the 11th to the 14th holes as “Ramside’s Amen Corner” and it is on this stretch that your score will be made – or destroyed.

Yes, we know, you have heard of Perranporth, which is one of the most beautiful parts of Cornwall. But have you ever heard of Perranporth Golf Club? There is no hotel. However, there are eight caravans and four luxury lodges, and you either plump for self-catering or eat and drink at Perranporth’s Dunes restaurant and bar. If your stay includes a Sunday then you must try the carvery. The restaurant is open until 8pm other than on Sunday and Monday, when it closes at 4pm. The bar closes at 11pm Monday-Saturday, and 10.30pm on Sunday. And, of course, there are plenty of bars and restaurants to choose from in Perranporth. The links course measures 6,296 yards and is a par 72. As you would expect, it features amazing panoramic views over the sea and beaches. The views from the fifth and 14th tees demand that you stop for a moment to take it all in. It was designed by the legendary James Braid. The greens are superb, no matter what time of year you play.

It has to be said that North Wales is one of the most underrated golf regions in the whole of the United Kingdom, boasting some wonderful links courses in beautiful seaside towns. And one of the best of those is Rhos-on-Sea Golf Club. Like so many other places on the Welsh coastline, the views are fabulous. It is a small hotel with just 12 bedrooms, all with en-suite facilities. This is a good time to visit Rhos-on-Sea as an impressive refurbishment programme has recently been completed. Locally-produced food is served at the Fairways restaurant, which looks out onto the course and surrounding countryside. Food is also served in the bar, and barbecues are served on the patio during the summer months. The golf course originally open in 1897 and has remained largely unchanged although the running order was altered in 1981. It was once the original bed of the River Conwy and a stream known as Afon Ganol still runs through the course. It measures 5,916 yards and is a par 68, but don’t be fooled by the length – this a proper test of your game.

Originally a 17th Century manor house, Ullesthorpe is at the heart of 120 acres. Although it retains many of its original architectural features, there has been a complete transformation inside. There are 72 bedrooms offering standard, superior and executive suites, and all of them have TV with pay to view movies, a selection of satellite channels and coffee-making facilities. Free wifi is available throughout the hotel. The Woodland Restaurant is open six nights a week offering a la carte and table d’hôte menus, while the Lincolns Bar serves food seven days a week. Breakfast, lunch, afternoon tea and dinner are available. You can also pamper yourself in the beauty salon, have a workout in the gym or a game of snooker. And then there is the golf course. A par 72 measuring 6,376 yards, it is one of the best parkland courses in the East Midlands.The feature holes are the par-three ninth, played from a raised tee that was once a railway embankment to a small green below, and the par-five finishing hole which sweeps for right to left and calls for an approach over water to a two-tiered green. 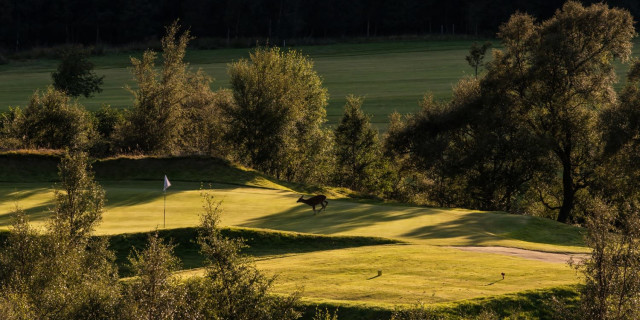 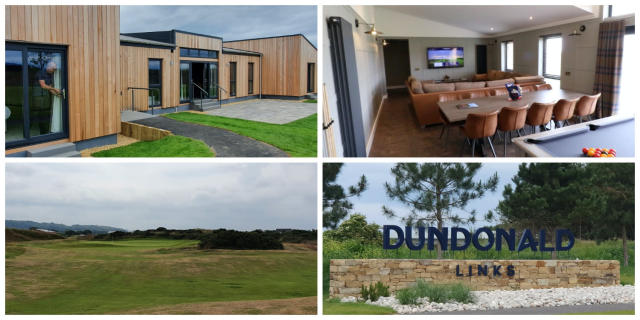