Marshall and Thomas claim victories on the TP Tour 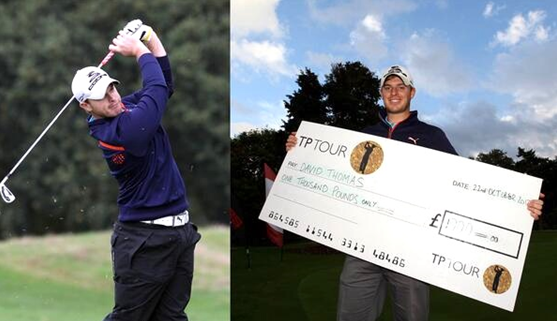 The TP Tour continues to stage exciting golf tournaments at some of the best venues in the country, throughout the Autumn and into the Winter months.

On 16th and 17th October the Tour visited Royal Ashdown Forest in Sussex, a golf course synonymous with traditional golf of the highest calibre.
European Tour player Andrew Marshall [Norwich Family Golf ] claimed an impressive victory with a superb course record of 65 in the second round, following a level par 72 in torrential rain in round one. He won by six from Van Phillips, Greg Hughes and Chris Jess.
The Tour looks forward to a return to RAF in 2014, one of the purest examples of heathland golf.
On 21st October the TP Tour together with Back 9 Events, hosted the final Elite Pro Am of the year at The Buckinghamshire Golf Club, the winning team was the Monte Rei Sub Aqua Club.
The leading six teams over the series will now do battle at the Grand Final at Bearwood Lakes on 6th November, for an amazing prize of a trip to Augusta to watch the 2014 US Masters.
The TP Tour is delighted to partner with The Afrasia Golf Masters, December 2-7 2013. The winner of our event at The Buckinghamshire on October 22nd was David J Thomas, from Hanbury Manor, who shot a four under par 68.
David now goes forward to compete at the spectacular surroundings of the Ernie Els designed Four Seasons Resort, Anahita, Mauritius.
David will be among a world class field of pros, at the five star resort, one of the World’s most desirable destinations.
Former Afrasia champions include European Tour winner Gregory Havret, and Ryder Cup sensation, Nicolas Colsaerts.
Further info on the Afrasia Masters.www.afrasiagolfmasters.com
Next week the TP Tour returns to one of England’s most renowned venues, Woburn, for an 18 Hole Shootout, November 5th.
The winner of this event will receive a sponsor’s invite to the Beko Classic, Belek, Europe’s biggest Pro Am which carries an $80,000 Prize Fund.  Previous winners of the Beko Classic include Raymond Russell, Phil Golding, Jamie Little and Liam Bond, all regulars on the TP Tour.
For further info on the TP Tour, Open to all Professionals. Call the Tour Office - 01628-566553  or email [email protected] www.tptourseries.com