In Wales, a consistent Frenchman notched his fourth European Tour victory after a stirring finish at Celtic Manor.
On the PGA Tour, an in-form Swede capped a fine summer with a huge win to move to the top of the FedEx Cup standings. 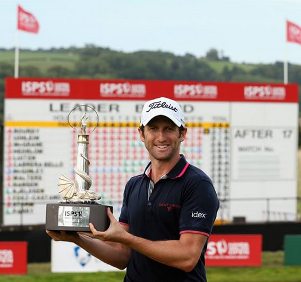 two shots from America’s Peter Uihlein at Celtic Manor.
It was an opportune win for the Frenchman, who claimed his first victory for almost four years in the first European 2014 Ryder Cup qualification event.
He started the week with a solid 67, but failed to improve on his four-under tally over rounds two and three.
Scoring was high on the Twenty Ten Course, though, and Bourdy entered the final round in a tie for second place, three shots adrift of Peter Uihlein.
The Frenchman started brilliantly with an eagle at the second, and offset a bogey at the sixth with a birdie at nine to turn on six under.
Uihlein, meanwhile, played his first nine holes in one over, and after another dropped shot at 10 and a Bourdy birdie at 11, he trailed the Frenchman by two. That deficit was wiped out with birdies at 13 and 14, setting up a tantalising finish.
Uihlein struck first with a birdie at 15, but Bourdy reacted in amazing fashion, holing a tramliner at 16 and knocking in a 12-footer for birdie on 17 – the two hardest holes on the course.
Uihlein responded with a birdie at 17, but 72nd-hole birdie from Bourdy, his third in a row, left the American needing a four up the par-5 18th to force a play-off. But he was unable to record the birdie he needed, leaving Bourdy to celebrate the biggest win of his European Tour career.

The Wales Open, played at the site of Europe’s scintillating victory in the 2010 Ryder Cup, should have attracted a much stronger field. In truth, it was a relatively lacklustre event – symptomatic of the end-of-summer European Tour schedule of late. Sadly, the FedEx Cup has drawn all the top European talent to America for most of August and September, and with the end-of-season series growing in stature every season, it’s hard to see that trend being reversed. It’s certainly a head-scratcher for European Tour executives, who now find themselves playing catch-up.

The Wales Open marked the start of the European Ryder Cup qualification process, with captain Paul McGinley hitting the first tee shot at Celtic Manor. It promises to be an exciting race, but are there any prospective debutants who could force their way into the team? As the highest-ranked player in the world without PGA Tour membership, Matteo Manassero has a great chance of making the team for Gleneagles in 2014. Also keep your eye on Alvaro Quiros – who I think will come back strong after finally recovering from a wrist injury – and talented young Dane Thorbjorn Olesen, who has reverted back to a golf swing he feels more comfortable with. 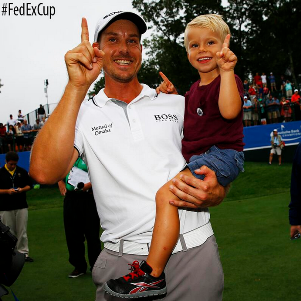 Championship by two shots from Steve Stricker at the TPC Boston.
Stenson has now moved to sixth in the Official World Golf Ranking and into first position in the FedEx Cup standings with two events to play.
The TPC Boston frequently ranks as one of the easiest golf courses on tour, and the players - aided by soft conditions that caused several suspension of play - once again took the highly-rated course apart.
Stenson trailed Phil Mickelson by four shots after round one, but surged into contention with a flawless second-round 63.
On Sunday (round three) he offset one birdie with six birdies to head into the final round on 17 under, two shots behind Sergio Garcia.
He started nervously, making bogey at the reachable par-5 2nd, but responded with three consecutive birdies from the fourth before a birdie at the eighth moved him one clear at the turn.
The Swede - who recorded four top-threes in his previous five starts - added another birdie at the 11th, moving him two clear.With Garcia struggling and no one charging from the pack, it looked as if seven closing pars would be enough.
But Stenson went one better, holing from the green-side bunker on 17 and three-putting for a safe par on the 72nd hole to finish two clear.

I'm full of admiration for Henrik Stenson. Not many people have suffered two possibly career-destroying lulls and bounced back so resoundingly. Stenson has been exceptional all summer, and it was great to see him win a first PGA Tour title since the 2009 Players and firmly re-establish himself among the world's elite. He's extremely deserving of the success that's come his way, and his story, work ethic and desire to succeed should act as powerful examples to any golfer, whether professional and amateur, who is suffering with their game and languishing in the golfing doldrums.

The slow-play saga reared its ugly head once again at the Deutsche Bank. During the final round, the last group (admittedly a three-ball) took two and a half hours to play the first seven holes. Granted, the weather played a role, but that is deplorably slow. Whether right or wrong, players aren't going to speed up if they know they can get away with it, and get away with it they can. PGA Tour officials are frequently putting groups on the clock, but no one ever seems to be penalised a stroke. Well, that's not strictly true. Teenage sensation Guan Tian-Lang was penalised controversially, but correctly, and fined a stroke at the 2013 Masters. And who was responsible for that? The European Tour's Chief Referee John Paramor - someone who adheres stringently to the laws of golf. PGA Tour officials would do well to follow his example.
This week, the PGA Tour takes a mid play-off break, with the European Tour heading to Crans-sur-Sierre for the Omega European Masters - one of the most prestigious tournaments and courses on the roster.
The Walker Cup, contested between top amateurs from Great Britain and Ireland and the USA, also takes place at the National Golf Links of America in New York.
Images: European Tour Facebook / PGA Topur Facebook