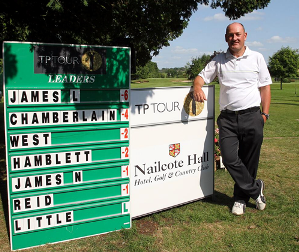 A field of 50 players battled it out for the 6 spots into the 2013 British Par 3 Championship.
The golf course at Nailcote, near Coventry is a brilliant challenge of precision, with numerous strategic hazards providing a unique test of the short game.
We recommend golfers of all ages to visit the course for its major entertainment value.
Lee James – former British Amateur champion shot an impressive score of 6 under par, one off the course record, to win by two shots from John Chamberlain.
Local pros Jak Hamblett and Oliver West were joint third on 2 under, followed on 1 under by Nick James and Tom Reid, Wentworth professional completing the six qualifiers.
We were honoured to have Golfing legend double Major winner Tony Jacklin at Nailcote, watching some of the afternoon action, Tony will be hosting the Championship on August 6-9 this year, where many Champions of golf will be competing for a £100,000 prize fund - in the most fun event on the British golfing calendar.
Joining Tony this year will be Ian Woosnam, Sam Torrance, Ronan Rafferty, Robert Rock and many other world class players and celebrities from stage and screen.
www.britishpar3.com | www.nailcotehall.co.uk | www.tptourseries.com
For more information on the TP Tour please call the TP Tour Office on  01628 566553