Player of the Year Contenders - European and PGA Tour

I think everyone would agree that winning his 2nd major, 2 FedEx cup wins plus winning both money lists and being world number 1, Rory McIlroy has probably done enough to ensure he will be named as player of the year – probably on both tours.  But what about the other potential contenders that may have been overshadowed by the Irish mans brilliance ? 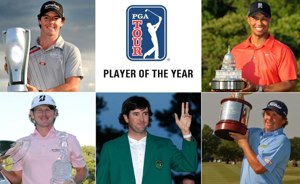 Another great consistent season for the 6ft 3" Ryder Cup star. Picking up only 1 win at the WGC Bridgestone, its Keegan’s consistency that gets him a shout for POTY. Finishing 8th in the FedEx Cup standings (regular season) he also amassed 5 top 10’s and finished in the top 25 in over half of the events he entered. Will be interesting to see he how fairs in 2013 – potentially minus his belly putter.

Back to his best? No. But sure is getting there. His 1st place on the FedEx Cup before the playoffs was down to his 3 wins during the PGA season. This was also backed up by 9 top 10’s from 19 starts. A very strong finish to his season during the FedEx Cup Playoffs with 3rd, T4th and T8th finishes.

A rise back up to number 2 in the world rankings was also an achievement that he can be proud of. Now we all wait to see what comes of this Bromance/rivalry between him and Rory in 2013.

Webb’s standout highlight in 2012 will obviously be his first major win at The US Open. 7 top 10’s left Webb looking at a 13th place finish in the Fed Ex Cup which he was unable to improve on during the playoffs.

2012 could be seen as a breakthrough year for Jason Dufner. Picking up his first and second PGA tour victories of his career he eased himself into the FedEx Cup playoffs finishing 2nd only to Tiger Woods. He couldn’t capitalise on that during the playoffs fading slightly.

Looking back now it seems an age ago when the big hitter played that amazing shot from inside the trees to pick up his first major at Augusta, but also his only win of this season.

That famous win coupled with 7 other top 10 finishes (2 2nd places) would see Bubba through to the FedEx playoffs in 5th place.

He finished 1st in driving distance with an average of 315.5 yards, 4 Yards more than 2nd place but maybe a slight Masters hangover held him up slightly.

Probably only 2nd to Rory McIlroy in regards to success on both sides of the pond, 12th on the FedEx Cup and 3rd in the Race to Dubai.

His only win this year came at the WGC Cadillac, however a string a high finishes including 2nd in the Tour Champs, T2 in the BMW PGA, T3 in The US PGA, T5 in the WGC Bridgestone, T5 in The Honda Classic, T6 at The BMW Masters, T8 at The Masters and 8th at The Memorial.

Surely a Major is on the cards in 2013 for Justin Rose the world number 7?

You would be forgiven for thinking this has been a quiet year as far as Luke Donald in concerned, especially with his feat of winning both money lists last year.

The standout highlight for Luke was regaining his BMW PGA title at Wentworth and a T5 place finish at The Open was his best performance in the Majors as his wait goes on.

He also picked up 1 win and 8 top 10’s on the PGA tour plus finished 8th on the Race to Dubai and 16th in the FedEx which is a great achievement.

Surely 2013 he will at last break his Major duck?? 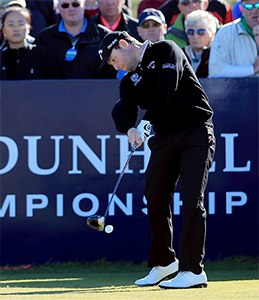 Not the most consistent player on the European tour but when he played well he won.

A breakthrough year for the South African in which he picked up his first 4 wins on tour which would go unmatched and leave him in 6th place on the Race to Dubai. More to come from Branden Grace in 2013??

It’s easy to include Ian Poulter as a European Tour POTY for his performance in the Ryder Cup which will go down in history, but let’s looks beyond that.

Poulter picked up a win at the WGC HSBC Champions event he also got close to that elusive major with a T3 at The USPGA, T9 at The Open and 7th at Augusta. Add these to a 3rd place finish at the Arnold Palmer he managed to finish 5th on the Race to Dubai.

Can the Match Play King make the next step in 2013?

Agonisingly missed out on what would have been his 2nd Major at The Masters, only losing to Bubba Watson in a playoff. Louis has built himself a reputation of being one of the most smooth swingers of a golf club out there.

A 4th place finish on the Race to Dubai and a world ranking of 6th came courtesy of wins at The African Open and The Maybank Malaysian Open plus 8 other top ten finishes either side of the pond came his way during the year. More success next season without a doubt! 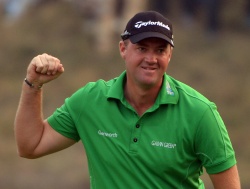 Winning the BMW Masters and The KLM Open along with 6 other top 6 finishes (including a T3 at The Masters) was good enough to have Peter finish runner up in the race to Dubai only to Rory McIlroy.

An all round great, steady season in which only 2 cuts were missed. Surely bigger things next season for the Swede?

Excellent season for the ‘Belgian Bomber’ saw his only win coming at the Volvo World Match Play.

Consistency was king for Nicolas who only missed 3 cuts from 24 starts and a string of high finishes (8 Top 10’s) saw him making great progress.