How to Reach Single Figures - A Journey

A few years back I set myself a target of reaching single figures before I reached my 50th birthday. I am fortunate enough that my job allows me time to play and practice and I also have a very understanding wife.

However, I was not enjoying my golf and felt like I needed a change to get the juices flowing again. So, in April 2018 I moved clubs and now play the majority of my golf at Churchill and Blakedown GC. I am also very lucky in that I am an Ambassador for Golfshake and have the opportunity to review different courses and try different equipment and practice aids.

I do have limitations with my body regarding my knee and my lower back, so hitting hundreds of balls down the range is not really an option for me. With this in mind I went back to a conversation I had with elite golf coach Dan Whittaker about my “goal” and he said to reach single figures you either need to work really hard on your swing or have a great short game, so the latter was the route for me. 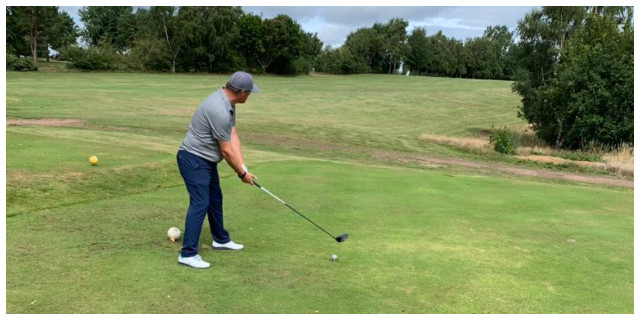 I have had numerous lessons down the years on my swing but not many on the short game. So, I headed down to the chipping area and putting green whenever I could. My handicap after my first competition at Churchill and Blakedown was 12.7. From then, it It took me five more competitions for my first handicap cut. But I was crucially now enjoying my golf again and the drive and passion to achieve my objective had returned.

The other great thing about my new club is that being sand based, it was open nearly every day and qualifiers were on all year, affording me the chance to get plenty of practice and competition golf in. Making slow progress, at the end of March 2019, my handicap had dropped to 11.8. I had been fitted for a new Cobra driver that year and that had started to pay dividends with more distance off the tee and much better dispersion. I gained about 16 yards with an extra 20% fairways being hit.

Helping to improve my ball striking, I reviewed FatPlate training aids for Golfshake, which really helped my game.

I was also fitted for my second set of One Length Cobra irons in March 2019, making a significant difference. More consistency, better distances, better gapping, and also a higher ball flight which would help in approach shots as I had always had a low ball flight.

As the season progressed, I found myself hitting the ball better than I ever had, but just couldn’t put a good score together. Then at the end of June I had a great round and victory in my first Board Competition, I received a 0.8 handicap cut down to 10.4 which was my lowest and my first time as a 10 handicap player, but progress stalled due to worsening putting, despite working hard on both it and my chipping.

More dramatically, I had been struggling with my right knee and back all year, so my doctor referred me for a MRI scan and the results came back showing I had arthritis in both my knee and back. Not the news I wanted to hear!

Endeavouring to lose weight and improve both my fitness and flexibility, in February this year, I began a Get Golf Fit programme with Jon Ship, whose exercises and advice were a massive help. You can see Jon's Fitness Series on Golfshake and see what difference it could make for you.

Just before Christmas I had two great bits of news. My wife revealed she would pay for a putter fitting as a birthday present and my Club Pro, Angus Hoare said he’d seen me practicing on my chipping and wanted to take me on board as a project. That project became known as “PROJECT9”.

Angus highlighted that a lot needed to be changed. Grip, stance, takeaway, follow through, pretty much everything. We got together every three or four weeks and I could see the improvements straight away, which was great. The stats also started to improve and PROJECT9 had gotten off to a great start.

In February 2020, I went for that putter fitting at TourX in Wigan with Lee Sullivan and this was a truly great experience. I came away with a new putting action and also a new putter, the Odyssey Ten Triple Track.

So, now I had all the gear, a terrific coach and no excuse to not reach my goal of single figures, but after a fitness session with Jon at The Belfry, when playing the Brabazon Course, from nowhere I developed the dreaded shanks.

I spoke to Angus and he could see straight away what the problem was, so we set about rectifying it. That wasn’t easy but I walked away knowing exactly what was happening if things started to go astray, so I knew how to put it right.

With all the changes the year started off as I expected with one step forwards one step back, but I kept practising and could really see the improvement in my chipping, pitching and putting.

I also attended a fitting at Callaway HQ in Chessington in February for Golfshake, this was a fantastic experience and I was amazed to find out I needed the MAVRIK Sub Zero driver which I thought was for higher standard golfers. It just shows the importance of a proper fitting as if I’d have chosen for myself this would not have been my choice. The driver came and I could see a difference in sound, feel and distance.

Just before lockdown, I wanted to challenge myself with a card in hand so decided to put a supplementary score in. What a great decision. Everything just clicked and after handing my card in, I was cut 1.8 shots to 9.1 - WOW!

PROJECT9 had been a success.

Having lost my passion to play and being diagnosed with arthritis, I didn’t expect to reach my goal, but I had with nine months to play with.

Unfortunately, progress was halted by the world changing event that has been COVID.

Fortunately, I have a big enough garden to work on my game, making a net and hitting full shots, helping me to keep things ticking over. This was something enhanced by sending swing videos to Angus so he could offer useful feedback.

Following months of lockdown, like all of us, I couldn’t wait to get back on the course. The only thing I wasn’t able to work on during the shutdown was my driving and this really showed. But once again, Angus came to the rescue.

The first competition eventually came round, and I didn’t really expect too much, so was overjoyed when I came in with 39 points and a cut of 0.6 to 8.5.

I was disappointed by the next three comps, but the August Medal was next, where I shot probably my best ever round. Steady off the tee, solid iron shots, chipped and pitched as well as I can remember, and just 27 putts. I made three birdies on route to shooting 75 (3 over), securing the win but most importantly another handicap cut from 8.8 to 6.8.

Never did I imagine getting down to 7. Amazing. But as I said to Matt Holbrook (my fellow Golfshake Ambassador) now the hard part is playing to it.

This has been a great journey and one I’ve thoroughly enjoyed. What next? Perhaps PROJECT5.

One thing is for sure, I’ll keep on practicing, playing and hopefully learning more about this great game.