It’s a maiden European Tour triumph that had long been viewed as an inevitability, but it finally happened on the grandest stage of them all in St. Andrews, where England’s Tyrrell Hatton has impressively won the Alfred Dunhill Links Championship by four shots, matching the 72-hole total of 23-under-par that was set by David Howell and Peter Uihlein in 2013.

The 24-year-old, who described his record-equalling 62 on Saturday as “quite clearly the best round I’ve ever had”, looked comfortable on the first tee of the legendary course ahead of the final day, playing alongside compatriot Ross Fisher, who had lost a playoff in this championship eight years previously. With conditions ideally suited for low scoring, Hatton couldn’t rest on the cushion of a three-shot lead that can prove to be precarious on such an afternoon in the Auld Grey Toon.

Following two comfortable pars, he ratcheted the pressure on the chasing pack with a trio of consecutive birdies on the third, fourth and fifth respectively. With playing partner Fisher struggling to get anything going in the early stages, the younger man had extended his advantage to six shots at one point with less than a third of the round gone. 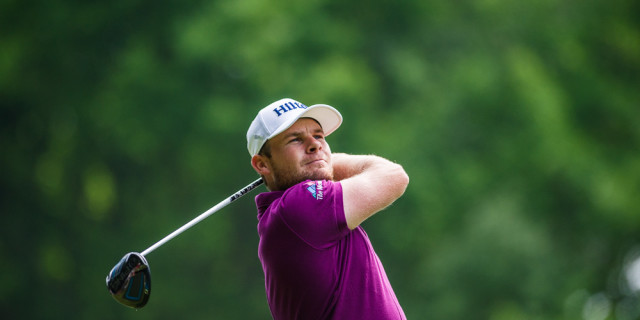 It was clearly his to lose from here, even if a rampant charge was to come from behind. Two-time major champion Martin Kaymer seemed for a moment to be the likely instigator of some back-nine pressure, but the German’s bogey on the seventh derailed his potential surge to secure a second title on the east coast of Scotland.

Rebounding from a disappointing experience at the Ryder Cup with a sixth-place finish, the champion of 2010 continues what has been a consistent season back in Europe after losing his PGA Tour card last year, but the likeable Dusseldorf-native (playing with his father this week) will be left to rue the fact that a victory has remained elusive since his dominant triumph at Pinehurst more than two years ago.

Truth be told, it was unlikely that anyone could have usurped Hatton whose performance was the dictionary definition of imperious. Making birdie on the ninth to complete a front-nine of 32, he turned to face the Old Course’s more treacherous second-half in assured fashion, with further birdies at the 12th, 14th and 15th all-but ensuring that the lucrative title would be his.

Despite a bogey on the famous Road Hole, and a dramatic hole-out from Richard Sterne in the penultimate group, Hatton was able to enjoy that iconic walk up the 18th, where his winning moment was greeted by his girlfriend and friends carrying champagne. What a waste of vintage stuff, you could hear the R&A members’ sigh. But there will be plenty more for the Hatton camp.

This breakthrough had been long coming for the Buckinghamshire-native. Enjoying a brilliant fortnight in these parts back in July, Hatton finished runner-up to an inspired Alex Noren at Castle Stuart, before tasting the upper echelons of major championship golf with a fifth place at Royal Troon, which had gone under the radar of Henrik Stenson and Phil Mickelson.

He would follow that performance up with a top ten at the PGA at Baltusrol, which brought him attention from some observers across the pond, where he has since played a number of events. His stock has continually risen since turning professional in 2011, but he perhaps hasn’t always received the appreciation befitting that of a golfer now set to be ranked inside the world’s top 35.

His often fiery temperament on the course had been questioned at times by commentators, which has evidently been reigned in with the passing of time and maturity, but it was the indication of a determined competitive spirit, much like Jordan Spieth, for a player who expects the best of himself at all times, which can be an invaluable trait to have for a top level sportsman. The amiable presence of Jamie Dornan, the actor of Fifty Shade's of Grey, fame, as his team partner only helped the situation.

Continuing to make up ground after a dismal 12 months in the United States last year, Richard Sterne ultimately finished in a tie for second alongside Ross Fisher. Following in significant the South African heritage of this event, the 35-year-old from Pretoria has suffered injury problems during his career, but indications are now in place that the six-time tour winner is on his way back.

Joakim Lagergren completed a solid four rounds to finish up in sole-possession of fourth, which is his best result of a season that has recently caught fire after a similarly strong performance in Denmark just over a month ago, with this placing set to almost double his earnings for this year.

Florian Fritsch, making the most of a sponsor’s invite, had threatened earlier in the round, but was scuppered by three bogeys in his last five holes. However, the German has carried the wave of his recent top ten finishes in Switzerland and in his own country. The 30-year-old, perhaps best known for having a fear of flying that restricts his ability to travel across the far reaching corners of the professional game, has subsequently found himself in the lower reaches of the Challenge Tour, but there is no question of his ability, as he has once again illustrated at the Home of Golf, ending the week in a tie for seventh alongside Bernd Wiesberger, Renato Paratore, and Soren Kjeldsen.

Most positively for the home fans watching on, Marc Warren was the strongest performer of Scotland’s favourites, making birdie on the last to finish in fifth, and it was a necessary showing from the talented 35-year-old from Rutherglen, who was positioned at a dangerous 125th on the Race to Dubai at the start of the week. The resulting cheque will be more than enough to secure his card for 2017, moving him up by 50 places on the money list, when he will be hoping to recapture his consistent form of 2014.

“Very happy,” he reflected. “To kind of pull out the best performance of the season this week, on my favourite golf course, is really, really pleasing, and coming down to the last few events where I needed a good finish or a couple of good finishes to try and keep my card, knowing that you had to do it, and doing it, is a pretty good feeling.”

With the recent successes of Danny Willett, Matt Fitzpatrick, Chris Wood, Andy Sullivan and Andrew “Beef” Johnston, it’s been a promising time for English golf, but surely now the previously unsung Tyrrell Hatton will be included among that not insignificant group of emerging talents.