ALEX NOREN continued to put his injury problems behind him when he won the Scottish Open at Castle Stuart after four days in which the field experienced everything that the weather north of the border could throw at them.

The Swede missed most of 2014 because of a wrist injury that at one point looked like it might end his career, but he bounced back to win the Nordea Masters last season and confirmed that he is back in rude health by holding his nerve to win the biggest title of his career before heading off to Troon to play in The Open Championship,which starts on Thursday.

While Noren's victory was something special, much of the talk at Castle Stuart centred around the Olympic Games, with Dustin Johnson the latest man to rule himself out of competing in Rio and the next man in line to replace him, Patrick Reed, doing an apparent about-turn. Having previously said that he would walk to Brazil to represent his country, Reed said that he needed to talk with his family and advisers before deciding whether or not to compete, but confirmed on Sunday that he intends to participate in next month's showpiece.

The competition has already lost Johnson, Jason Day, Rory McIlroy, Adam Scott, Charl Schwartzel and Louis Oosthuizen, with a host of others refusing to commit themselves. Selection will be based on this week's world rankings and the organisers will be praying that Jordan Spieth, who has yet to commit himself, does not join the exodus. It does make you wonder what the point is of continuing with the Olympic golf tournament. The Games are all about the world's greatest athletes showcasing their talent in front of a television audience of billions and the golf tournament will no longer fulfil that criteria. It is a real shame, a golden opportunity spurned.

Meanwhile back at the golf...

All four of Noren's previous victories had come when he held the 54-hole lead and he maintained that record, even though he was caught but never overtaken on a dramatic final day. A two under par 70 took the Swede to 14 under and handed him a one-shot victory over Tyrrell Hatton, with Nicolas Colsaerts, Danny Lee and Matteo Manassero a shot further back. 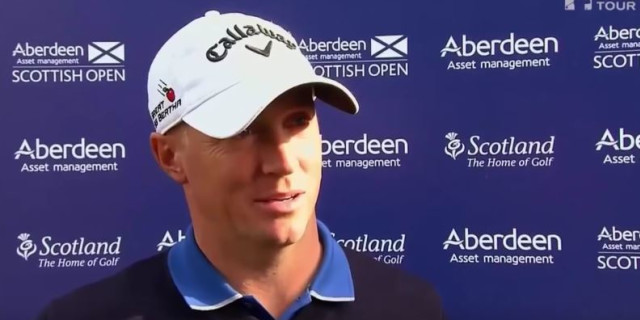 Colsaerts, Hatton, Manassero and Richie Ramsay, of Scotland, all earned themselves a place in The Open by virtue of their top-12 finishes..

Hatton is still looking for his first European Tour win but he surely won't have to wait much longer. This was his best result in a season in which he has missed just two cuts in 13 events. You sense that if he can only control his temper that the wins will come by the bucketload.

Another Englishman, Andy Sullivan, finished at 11 under alongside Ramsay with Spaniard Jorge Campillo and England's Callum Shinkwin a further shot back. Graeme McDowell,  Ryder Cup hopeful Russell Knox and Reed finished on nine under.

Ramsay was the first to make a charge, with four birdies from the third – the highlight being a 45-foot putt on the fourth – to move him to 10 under, but he was still three behind after Noren birdied the second hole. Next to make his move was Lee, who progressed to 11 under with birdies at the third and fifth holes.

When Noren dropped a stroke at the eighth and Lee birdied the 11th, the two were tied for the lead. Hatton joined them with a birdie on the 12th but Noren followed him in to open up a one-shot lead once again.

Colsaerts, one of the biggest hitters on the European Tour and gradually returning to the form that saw him earn a Ryder Cup berth, went eagle-birdie-birdie-birdie from the 12th and added another at the 18th to come home in 30 and set the target at 12 under.

But Noren was not to be denied and all but sealed the deal when he struck his approach at the 15th hole to six feet and holed the putt for another birdie. "I'm so happy it's over because it was a tough, tough leaderboard," he said. "A lot of guys at 11, 12, 13 under and it was just not a cruising win at all.

"Thinking about it this morning, how much it would mean, then it feels like miles away and now when it happens, it just feels unbelievable. This is by far my biggest win, the amount of players that are here and on a course like this in Scotland, it's only what I dreamt of growing up

"I'll just try to enjoy this. I know how tough this game is and I'm just really happy to get a win and then for Troon, it's a new week and we will see what happens."

Manassero's return to form will have warmed the hearts of many. After he won the BMW PGA Championship in 2013 he climbed to 23rd in the world rankings, but he has since endured an unimaginable slump that has seen his world ranking tumble to 596. He is still only 23 years old and it all started to go wrong for him when he decided to alter his swing because he didn't feel he hit the ball far enough. He then began to struggle with all parts of his game and when he lost his putting stroke it began to seem that his decline might be terminal.

This performance will do wonders for his confidence. It is to be hoped that it marks the start of a sustained recovery.

A Magical Links Experience in Scotland

View From The Fairway - Wilco Nienaber is a Future Star