Golfing in Bad Weather - Rules to be aware of

Post from Barry Rhodes author of the book, ‘999 Questions on the Rules of Golf’

Many of us will be familiar with seeing ‘Course Closed’ signs at this time of year and there will probably have been other times when we started a round and then wished that the course had been closed, because of inclement weather. In this article I am going to explain some of the Rules that apply when conditions on the course are less than favourable.
The first point that may surprise some readers is from the Definition of Loose Impediments;

Snow and natural ice, other than frost, are either casual water or loose impediments, at the option of the player. 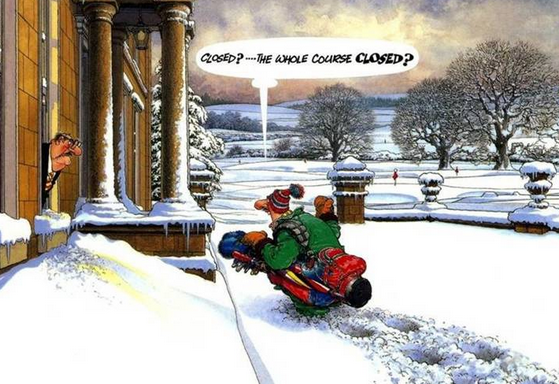 So, if a ball lies in packed snow or slush in a bunker, the player may play the ball as it lies, or pick it out of the snow and drop it in the sand within one club-length of the nearest point of relief, not nearer the hole, without penalty, as for casual water in a bunker. However, the player is not permitted to remove snow from around the ball, as this would be treating the snow as a loose impediment, which may not be removed while the ball is lying in the same bunker, Rule 23-1.

I wonder how many of us have breached Rule 6-8a from time to time. This Rule clarifies that bad weather is not of itself a good reason for discontinuing play. The penalty for breaching Rule 6-8 in stroke play is disqualification. So, in stroke play, competitors must not discontinue play by sheltering from bad weather unless and until they are advised that the Committee has suspended play. In match play, players may agree to discontinue their match for any reason, including bad weather, providing the competition is not delayed by them doing so. If the players cannot agree, in other words one side wants to continue play and the other does not, then the match must proceed; the match may not be suspended unless both sides agree. There is one circumstance where players in stroke play may discontinue play for bad weather and that is when they believe that there is danger from an electrical storm, which could result in lightning. There have been several instances where players have been struck by lightning on a golf course, some with fatal consequences, so it is eminently sensible that the Rules permit players to leave the course, so as not to put themselves at risk, when there is an electrical storm in the locality.

There is nothing in the Rules about playing in fog or thick mist, but for safety reasons courses should obviously be closed as soon as players cannot see where their ball may land. Unfortunately, the nature of fog and mist means that there can be poor visibility on one area of the course, but clear conditions on another. In my opinion, it would be wrong for a Committee to disqualify a player who insisted on discontinuing play in circumstances in which it could be dangerous to other players if they continued with their round.

Other Rules situations relating to bad weather are;

A final point is that Committees should not take bunkers out of play just because they are waterlogged (Decision 33-8/27). The Rules provide options for relief from bunkers containing casual water and Decision 25-1b/8 actually details those options that a player has when a bunker is completely covered by water. In exceptional circumstances, Committees may introduce a Local Rule providing that specific bunkers, which are known to be flood damaged prior to a competition commencing, are deemed to be ground under repair  through the green (Decision 33-8/27).