Just where should you place a rake after playing from a bunker?

Post from rules expert, Barry Rhodes writer of '999 questions on the rules of golf'

It may seem like a small matter, but we have all use rakes in bunkers and occasionaly they interfere with play. Rules expert Barry Rhodes explains the rules around rakes and shares his view on where they should be placed. 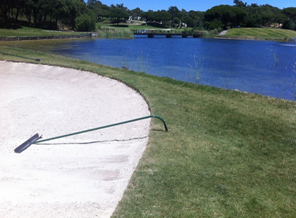 This article concerns a question that has little to do with the Rules of Golf, but can be a controversial subject amongst those that play the game.

Where should you place the rake after raking a bunker?

I have studiously avoided this subject during my four years of blogging, but have been persuaded to write about it now, following a false assertion that was communicated to me that the R&A recently ruled that bunker rakes must be left within the margin of bunkers. There is no truth to this, but you may be surprised to read that there is a Decision on the subject, right at the end of the book, Decision misc./2.

Q. Should rakes be placed in or outside bunkers?

A. There is not a perfect answer for the position of rakes, but on balance it is felt there is less likelihood of an advantage or disadvantage to the player if rakes are placed outside bunkers.

However, in practice, players who leave rakes in bunkers frequently leave them at the side which tends to stop a ball rolling into the flat part of the bunker, resulting in a much more difficult shot than would otherwise have been the case. This is most prevalent at a course where the bunkers are small. When the ball comes to rest on or against a rake in the bunker and the player must proceed under Rule 24-1, it may not be possible to replace the ball on the same spot or find a spot in the bunker which is not nearer the hole – see Decision 20-3d/2.

Therefore, after considering all these aspects, it is recommended that rakes should be left outside bunkers in areas where they are least likely to affect the movement of the ball.

Ultimately, it is a matter for the Committee to decide where it wishes rakes to be placed. (My bolding.)

Personally, I disagree with the Ruling Bodies on this question. My main argument is that a player is more likely to suffer a detrimental rub of the green when rakes are left alongside the bunker, in that a ball may then be deflected into the bunker by a rake. Of course, it is almost as likely that a ball may be deflected from coming to rest in a bunker by a rake that is lying in the bunker; however, I guess that most amateur players would prefer this consequence! My preference is for the rakes to be left inside a flat part of the bunker with their handles resting against the side, to make it easy to pick-up the rake. I think that the use of the type of rake in the photo above, with a curved handle, is a particularly good solution. I do not like to see rakes left in the middle of the sand, as this necessitates players having to walk into the bunker to retrieve them, which a consequent delay in play, as they smooth over the footsteps that they have made by doing so; or worse, leaving their footprints in the sand to the annoyance and possible inconvenience of those following.

Here are some related Rules points to understand;

Whilst I have given my opinion on the subject of placing rakes in bunkers, I do accept that there are many who disagree. I have found it to be a contentious issue and so I will not be entering into any communication on the matter, as there is no definitive answer and it would lead nowhere.