Inside the Tour: End of Season Update

Neil's got over 30 year experience in club fitting, club making and was the Technical Director at Golfsmith Europe. He's considered an expert in his field and regularly writes technical articles for various golf publications and runs Golf Technical Services supporting the European Seniors Tour.

It’s been a couple of months since I shared my thoughts and experiences of life on the Seniors Tour Support Truck, and in that time there’s been three more tournaments in the UK. 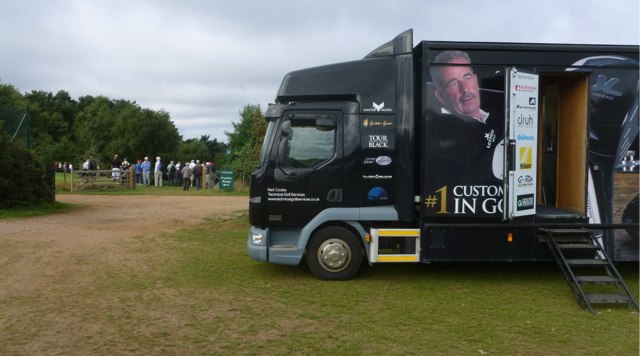 First off, we headed up to Fairmont in St Andrews a Sam Torrance designed course. The practise ground is excellent but at the top end is a fair distance from the clubhouse, last year we had horrendous weather and on the first day a rain delay resulted in 23 soaking professionals squeezing onto the truck! This year the weather forecast was pretty good though stiff winds were expected. Anytime high winds are expected I make sure I’ve got plenty of lead tape on the truck, a lot of the guys use long putters which can be affected badly by the wind. The great thing about using lead tape on the head as opposed to dropping weight down the shaft, is that it can easily be removed if the wind drops the following day (although, it’s illegal to remove it during the round).

After a 10 hour drive to the tournament, I arrive to a find a potential disaster, Angel Franco has flown in from Paraguay but his clubs haven’t! He’s waited for 2 days but with only 24 hours before the event is due to start things are looking serious.  There can’t be a worse scenario for a tournament professional, but Angel isn’t your typical tournament professional! He manages to borrow a spare driver and fairway wood from a fellow competitor and marches onto the truck to see if I can help with a set of irons. Now, I carry a pretty good stock of shafts and a very comprehensive range of grips but I don’t normally carry heads. Luckily for Angel for some reason I have a set of Infiniti forged irons heads in the workshop, he likes the look of them so I make them to his specifications using the Dynamic Gold X100 shafts and Golf Pride Multi Compound grips that he uses in his own set.

The next crisis arrives in the shape of Pete Mitchell, whose clubs I’d reshafted at the previous tournament. It seems the shafts were great but he’s gone off the heads! The set he arrives with are an old set with fairly outdated graphite shafts, so out they come and a set of Nippon NS Pros go in.  These shafts couldn’t have been more different to the Project X shafts he’d loved 2 weeks previously, the new ones are lightweight and relatively soft in flex, the Project X are heavy and very tip stiff. The fact that Pete can hit both so well shows how adaptable and talented these guys are.

On the eve of the tournament Franco’s clubs turn up, but unbelievably he decides to keep the new irons in the bag. Santiago Luna goes on to win, Franco finishes tied 8th and Mitchell finishes tied 3rd.

From Scotland the tour heads south to what I personally think is the best event of the season, The Travis Perkins at Woburn.

Woburn is a fantastic venue that draws big crowds and has a really special atmosphere.  I get there to find there’s no power supply on the practise ground so I’m positioned on the edge of the tented village, which is handy for the burger vans but not great for working with the players on their clubs!

The location doesn’t make a difference when regripping and changing shafts, but if you’re working on changing the lie angles or altering lofts for yardages, it’s much better to be on the practise ground. A player doesn’t want to weaken or strengthen a loft, walk back 400 yards to hit the club only to find the alteration doesn’t give correct distance. (To be fair, it’s the caddies that do the footwork!)

Not much of any note happens pre tournament apart from being mobbed by the players when I receive a delivery of the two hottest putter grips, Super Stroke and G-Rip. So most of the time is spent, cutting off and replacing putter grips.

On the afternoon of the first day I’ve a friend’s wedding to attend so call in a favour from an old colleague Rob Mallett, I tell Rob that it should be fairly quiet. Within an hour of me leaving Manuel Pinero arrives on the truck wanting his putter flattened 2-3 degrees. Bending putters is my big phobia, you only know how far they’ll bend when you snap them! Rob is of the same opinion and says Manuel is welcome to bend the putter himself. Two minutes later and the putter is in two pieces, luckily it’s the shaft that’s broken and even luckier is that I happen to have an exact replacement in stock. Monty wins his first Seniors Title in only his third start.

And so to the last British based tournament, the English Seniors at Rockliffe Hall in Darlington.  A new venue for the Seniors which meets with approval for the lay out and condition  but there’s a few players concerned that the greens are very small and have the contours like “an elephants graveyard”.

The weather forecast is for rain and wind plus the tricky greens doesn’t bode well for low scoring.  The workshop routine is pretty uneventful, Pedro Linhart appears with an old Hogan 1 iron with a XX flex shaft,  delofted to 14 degrees which he is delighted won’t fly higher than 10 feet off the ground, he’s practising with it in readiness for links golf.

John Gould comes in for a complete regrip, then returns later complaining he’s leaking the driver right. Upon close inspection, it transpires John’s got a new driver shaft that’s bigger in diameter than his irons, this has resulted in an overall bigger grip which is restricting releasing the club through impact. We put a smaller grip on and this solves the problem.  Despite my reservations in regard to the scoring, the first day produces sub par rounds for over half the field, this may explain why I’ve never made money from the bookies! The rains persists and a number of players switch to full cord grips which tend to perform better in the rain.  Steen Tinning produces flawless golf to win on an astonishing 17 under par.

Well that’s it for another season, I’m back in my workshop having cleaned the truck out and carried out the end of season stock check. The tour goes now to Taiwan and the Mauritius much as I’d like to support the Tour, I don’t think the truck’s fuel consumption will allow it!

Next event will be spring next year, so if you have the opportunity I can thoroughly recommend a visit to the “friendly tour”.

Inside the Tour: Running a Tour Truck

Inside the Tour: Senior Open Championship