Inside the Tour: Running a Tour Truck

Neil's got over 30 year experience in club fitting, club making and was the Technical Director at Golfsmith Europe. He's considered an expert in his field and regularly writes technical articles for various golf publications and runs Golf Technical Services supporting the European Seniors Tour. 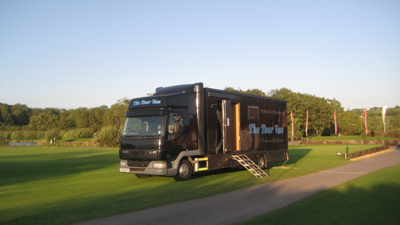 Certainly professional golf can be glamorous but it does have its other side and this is where a lot of us fit in!  Make no mistake, I love working on the Seniors Tour, it’s known as the friendly tour and the one that the club golfer really ought to make the effort to watch when possible. There is no way the average golfer can relate to the guys on the main Tour, whilst their technique and ball striking abilities are so impressive; there is no chance to emulate them. However, the Seniors who I’m sure won’t mind me saying aren’t as in great shape as they once were, still hit the ball both sweetly and surprisingly long. That’s my sales pitch over, let’s see how the ISPA Handa PGA Seniors unfolded for me.

Needing to be there a day before the Pro Am, I load up the 7.5 tonne tour truck with fresh stocks of grips, shafts and general consumables. It doesn’t matter how many double checks I make I’m sure to forget something crucial, everything seems to be there when I realise I don’t have any two piece grips for broom handle putters. It’s the one grip I know will be in demand as there’s a hell of a lot of guys on the tour using the soon to be illegal long stick. A quick call to Steelsy at G-Rip grips and arrangements are made to ship some direct to the pro shop at Mottram Hall. The 190 mile trip at 54mph to Wilmslow is fairly uneventful. Arrival at Mottram certainly isn’t, the organisers are trying to sort out the Pro Am, electrics, score boards, marshals, caddy’s bibs and the last thing they need is me demanding 240v power and a 3 pin plug on a prime position on the range.  I settle for a pitch between the putting green and the 10th tee, and go about sorting out what’s really important for a tour truck. First things first are the showers. I sleep in a bunk in the cab and I need the low down on the showers in the club house, opening times, water pressure and are there complimentary towels?  I don’t rate courses by the yardage, standard scratch or the stimp readings of the greens. So in my humble opinion the three best courses in the UK are Caversham Heath, Turnberry and Wentworth (pre clubhouse renovations)  Having found the location of Yum Yums Burger van (the second most important consideration) I’m ready for the tournament to start!

Green keepers have started early cutting the practise putting green at 4.08 as I’m approximately 32 feet from the green it’s a an early start for me too.   Pro Am day so it’s going to be quiet for me for a while, the pros won’t tinker with clubs before what is essentially a practise round to them, and most of the celebs just need a “this way up” sticker on their clubs. I do manage to broker a deal with Darren Gough though, I give him a pair of sunglasses in return for him having his photo taken with my frame Peterborough United shirt. As a mad Barnsley fan he’d rather have paid for the shades! As I suspected things are slow until the guys turn up who aren’t playing the Pro Am. Clubmaking can mind numbingly dull at times and I spend the next five hours cutting off grips, peeling off old tape and putting on new grips.  The guys whose clubs I’m working on are all a great laugh and very appreciative but it’s day one and I’ve got blistered thumbs with broken nails. Console myself with a couple of quite beers in the clubhouse before turning in. 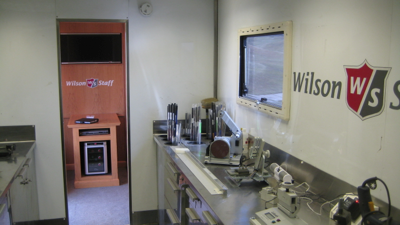 Green keepers start mowing at 4.03. Word on the truck is the course is set up for low scoring, though the front 9 is where the score is set up. This proves to be right as Paul Wesslingh tears up the front nine and Des Smyth follows him.  In fact Des gets it to 9 under before slipping a bit at the end.  Meanwhile, back on the truck this is all a different world as I’m spending my time regripping, adjusting loft and lies and taking out bent shafts and putting in straight ones.  I’m starting to think Migel Angel Martin isn’t playing, but late morning he arrives. Now Migel is the world’s greatest club tinkerer, in fact I reckon he spends more time on the truck than me! The other thing with Migel is he’s the youngest looking senior you’ve ever seen a lot of the other guys have demanded to see his birth certificate; he’s over 50 and looks about 22! He must have a painting in an attic somewhere.  Round one finishes with a host of well-known names bunched at the top of the leader board and I’m running low on full cord grips without a reminder. Still, no one has asked for a split grip yet, which is a stroke of luck as there’s no sign of them at the pro shop. Go into town with a few caddies, Greg (Gary Wolstenholme) Chris (Nick Job) and The Cat (Carl Mason) all their guys did pretty well so the beer slips down well.

Bit of a lie in today, green keepers don’t start until 4.12. A quick scan down the previous day’s scores to see if any of the guys visiting the truck yesterday did well. More importantly scanning to make sure nobody had a nightmare. You do feel responsible sometimes, caddies and clubmakers live with that ever present dread that they might screw up.  I’m about level for the round yesterday, a few sub par and few with mid 70’s. Today’s all about making the cut and I’ve got my fingers crossed for a few of them. You’re not supposed to take sides but there are some guys you can’t help rooting for. The day’s duties include more regripping, a few loft adjustments and a couple of grinding jobs on wedges. Gary W keeps me busy late on, checking loft and lies on then dozen putters he travels around with. Split grips turn up at last, luckily haven’t needed them yet. Off to downtown Wilmslow to celebrate all the guy’s bags making the cut.

Green keepers back in the groove…..4.06! Generally quieter as a lot of players have packed up and gone, a few big names but mostly PGA club pros who’re already looking forward to next year. At this point I should point out that to make the tournament through qualifying you’ve got to play good golf so missing the cut is no disgrace. Today’s the day when the players try to make their move on the leader board, there’s going to be some low scores but also a lot of “what ifs” Work on the van is generally quiet, new grips seem to be the order of the day. I don’t stick around for the last day as those who haven’t done so well are desperate to head for home and those who are doing well won’t change anything. Andrew Oldcorn takes a while to settle on a new putter grip but after three changes goes away pretty happy. As things slow down I decide to make a break for home, I settle my account at Yum Yums and head off after the leaders tee off.  Hit the road at 12 noon with half a dozen split grips still in their wrappers. 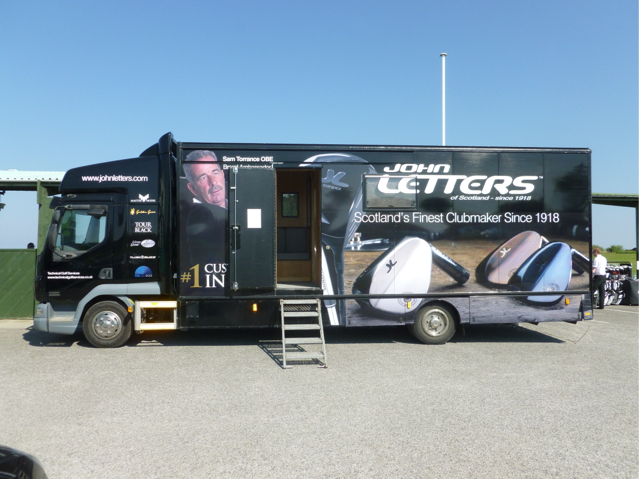 Miss the drama of the last day, although you’re part of the tour on the truck you’re detached from it too. Paul Wesslingh wins at a canter and defends his title, I’m pleased for him as he’s a really great bloke, but then most of them are and they’re a pleasure to work with. The top of the leader board is littered with great names which is only right. I’m getting ready to head off to Royal Porthcawl and it’s guaranteed I’ll forget the split grips which will be gold dust next week. I decide not to get the lawn mower out until the afternoon.