David Howell won the Alfred Dunhill Links and deservedly returned to the winner’s circle following a seven-year absence and is celebrating with Adams Golf following his move to play with their equipment earlier in the year.

Howell, whose last victory was the 2006 BMW Championship, joined Adams Tour staff on the eve of this seasons BMW PGA Championship at Wentworth and has never looked back, culminating in handing Adams their first win on the European Tour in 2013.

With rounds of 67, 68 and 63 Howell headed into the final round two shots behind the leader Peter Uihlein, but the 38 year-old Englishman shot a closing round 67 around the Old Course at St Andrews, to haul himself into contention and post a 23 under par total of 265 and force a play-off with the American.  Howell then holed an eight foot putt on the 18th hole, the second extra hole, using his Yes! Callie putter to take the title.

“I’m delighted for David. He is a top player and top guy and epitomises everything about the Adams brand” said Simon Homer, Head of Adams Golf Europe. “We had no doubts when we signed him earlier in the season that a win would not be too far away and on behalf of everyone at Adams we would like to extend our congratulations.”

The win, and cheque for €589,561, catapults Howell to 12th on the Race to Dubai and back in the top 100 on the Official World Golf Rankings. 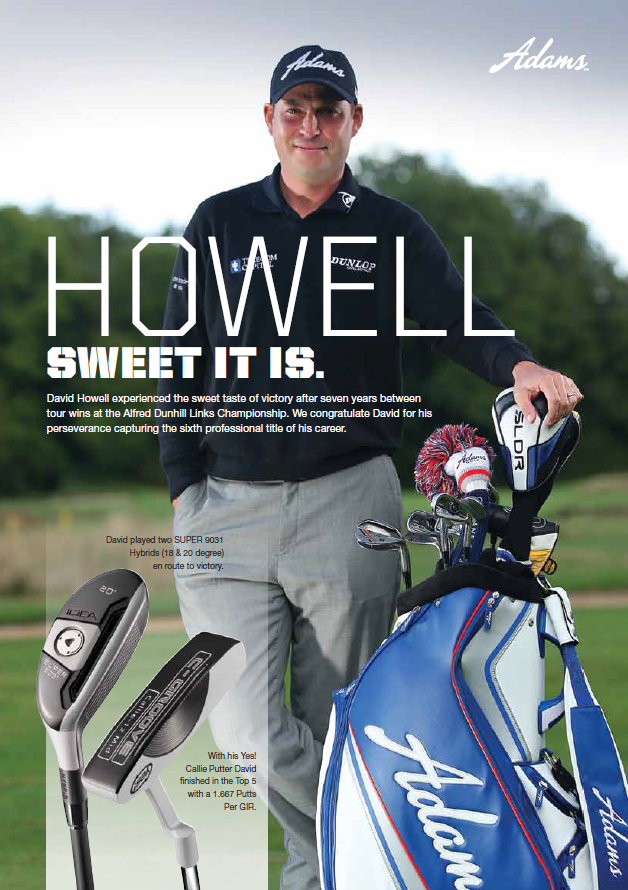 Peter Uihlein - In The Bag