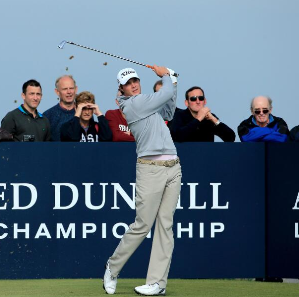 Championship. The Englishman topped Peter Uihlein with a birdie on the second hole of the playoff to take the title at St Andrews. Both players finished on a 23-under par, 265 total after regulation play, before Howell holed an eight foot putt to secure an emotional victory on the famous 18th hole, his first victory since the 2006 BMW PGA Championship at Wentworth.

Peter Uihlein has continued his stunning form in his rookie season on the European Tour, after securing his first victory at the Madeira Islands Open earlier in the year. The American threatened to become the first player to shoot a 59 on the European Tour on Friday, before settling for a 60 when his eagle attempt on the final hole slid agonisingly by the cup. However, with the second top-2 finish in his last three starts and his seventh top-10 finish of the season, Uihlein has catapulted himself into the all-important Top 10 in the Race to Dubai standings.
Check out what Peter Uihlein has had In The Bag this year:
Ball : Titleist Pro V1x golf ball
Driver : Titleist 913D3 driver
Fairway : Titleist 913F.d Low Spin fairway metal
Utility Iron : Titleist 712U utility iron
Irons: Titleist 680 irons
Wedges: Titleist Vokey Design gap, sand and lob wedges
Putter : Scotty Cameron putter
Photo - Alfred Dunhill Links Twiiter / @Dunhilllinks