The latest Titleist driver has now arrived in the form of the Titleist 913 D2 and D3. Titleist claim to have made improvements in both ball speed generation and distance performance:

Designed and built for more speed and more distance, the new Titleist 913 drivers deliver more performance with the most precise fit available to all serious golfers through an unparalleled combination of new innovations and 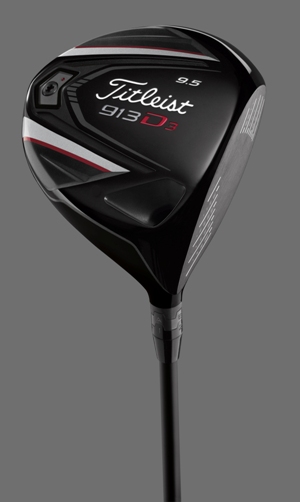 The 913D2 driver features a 460cc full-pear shaped head designed for maximum forgiveness and a slight draw bias, while the 913D3 has a 445cc classic-pear shape that is forgiving with tour-inspired workability. Unlike the 910 series, both D2 and D3 models now provide the same launch and spin characteristics to provide maximum fitting flexibility. Dan Stone, VP of Research and Development commented on the new 913 driver:

“Golfers can now choose their 913 model based on size or shape preference, amount of forgiveness or workability, and amount of draw bias, they can then dial-in their launch and spin settings precisely using the SureFit Tour hosel.”

The buzz surrounding the new Titleist 913 drivers built quickly, with Titleist's previous generation 910 drivers having earned more wins on the PGA Tour than any other driver since their debut two years ago.

The seeding and tour validation process for the 913 drivers began in late June at the Alstom Open de France event, where 14 players immediately put 913 drivers in play.

That previous week, Rory McIlroy had a sneak peak at the 913 driver, doing some testing for the first at his home in Ireland. He decided to immediately add a 913D3 8.5º to his bag for the European Tour's Irish Open.

A couple weeks later, the Titleist 913 drivers recorded their first pair of victories on the same Sunday. Bernd Wiesberger played a 913D3 7.5º driver in winning the European Tour's Lyoness Open, while Ben Kohles played a 913D3 9.5º on his way to the winner's circle at the Web.com Tour's Nationwide Children's Hospital Open, where he was making his professional debut. Remarkably, Kohles notched the 913's third win the following week at the Cox Classic.

The momentum continued into the USPGA Championship, as 26 players stepped to the first tee at Kiawah Island's Ocean Course with 913 drivers in the bag. That includes McIlroy, who went on to win in record-setting fashion, claiming the first PGA Tour and Major victory for the new 913 drivers, and topping the driving distance stats in the process.