Brett Rumford completed a dominat week for Titleist when he claimed his second consecutive European Tour title at the Volvo China Open. in total it was stunning eight-win weekend for the Pro V1 franchise. Rumford closed with a final round 68 in China to post a 16-under par winning total and follow his play-off victory at last week’s Ballantine’s Championship 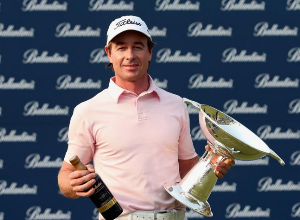 with a four shot win.

There was further success for the Titleist Pro V1x on the PGA Tour, where Titleist golf ball loyalist Derek Ernst earned his first professional victory at the Wells Fargo Championship. Rumford and Ernst were joined in the winner’s circle by six further Titleist golf ball loyalists this weekend, as the #1 ball in golf continues to be the choice of champions across worldwide professional tours.
Rumford trusted a host of Titleist equipment to capture his fifth European Tour title, including the
Ball : Pro V1x golf ball
Driver : 913D2 driver
Fairway : 913Fd fairway metal
Irons : 712U 2, 3 and 4 utility irons, and CB irons,
Wedges : Vokey Design SM4 wedges
The Australian finished four shots clear of fellow Pro V1x loyalist Mikko Ilonen in second, and now sits at the top of The Race to Dubai standings. As well as being the choice of the champion, Titleist was the most relied upon golf ball in the 150-player field with 98 players, more than five times the nearest competitor with 19. Titleist also topped the counts for irons and wedges respectively.
On the PGA Tour, Derek Ernst trusted the control and consistency of the Pro V1x golf ball to earn his maiden PGA Tour victory after coming through a sudden death playoff. The 22-year old rookie was playing in only his ninth PGA Tour start and secured his spot in the tournament as the fourth alternative. Fellow Pro V1x loyalists Robert Karlsson and Lee Westwood tied for fourth place, as three of the top five finishers trusted Titleist golf ball for their success. Titleist golf balls were the overwhelming choice of the 156-player field, with 106 competitors putting their trust in the Pro V1 or Pro V1x, more than five times the nearest competitor with 20. Titleist also led the counts for wedges and putters respectively.
Elsewhere, on the LPGA Tour, Pro V1 loyalist Cristie Kerr captured the Kingsmill Championship with a par on the second hole of a sudden death playoff to claim her 16th career LPGA Tour title. On the Asian Tour, Titleist Brand Ambassador Bernd Wiesberger trusted Titleist equipment from tee-to-green to win the CIMB Niaga Indonesian Masters in Jakarta.
On the Champions Tour, Esteban Toledo topped Mike Goodes and Gene Sauers in an all-Pro V1x playoff at the Insperity Championship. On the Web.com Tour, Pro V1x loyalist Brendon Todd earned his second career title at the Stadion Classi, posting an 8-under par winning total. On the Japan Tour, Titleist Brand Ambassador Michio Matsumura (Pro V1x) closed with a final round 67 to claim his third career title at the Chunichi Crowns.
On the South African Tour, Titleist Brand Ambassador James Kingston was crowned champion at the Investec Royal Swazi Open after holing a 12-foot putt to win a sudden death playoff. These victories take Titleist’s 2013 worldwide win count to 54 across worldwide professional tours, compared to 11 for the nearest competitor.

How the Titleist Pro V1 is made

In The Bag Series