FootJoy,  enjoyed an amazing triple win this weekend, as brand ambassadors Thomas Aiken, Kevin Streelman and Stacey Lewis produced some flawless golf to claim victories on their respective tours. Playing in the final group on Sunday at the Tampa Bay Championship, Streelman remained steely calm under the pressure to walk away with his maiden PGA Tour title. In Delhi, Aitken collected his second European Tour title at the Jaypee Greens Golf & Spa Resort following a three shot victory at the Avantha Masters. Rounding off the weekend in style for FJ, Lewis overturned a four- 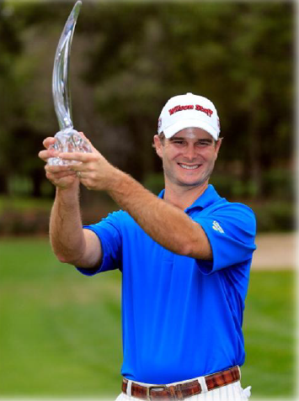 shot deficit to snatch the RR Donnelley LPGA Founders Cup and in doing so moved to #1 in the Rolex Rankings.

In his 153rd start on the PGA Tour, Streelman began the final round in impressive fashion, with a birdie on the opening hole and a chip-in for another birdie at the third hole. Tied for the lead standing on the 13th tee in his FJ ICON golf shoes and FJ SciFlex™ glove, the Scottsdale resident produced a stunning shot to set up a clutch birdie to move one clear of the field at 9 under-par. Another birdie followed at the 17th hole, clearly showing that Streelman wasn’t going to fold under the pressure. A stress-free par at the 72nd hole and a final-round 4 under par 67 led to an emotional two-shot victory. The winner cheque for $990,000 moves Streelman up to 6th position in the FedEx Cup standing.
Over in India, Aitken was in magnificent form all-week long, especially during Saturday’s third-round where he put on a stunning display of ball striking en-route to a 10 under-par round of 62 to set up a three-shot lead going in to the final round. It wasn’t all plain sailing for Aitken though on Sunday, as fellow FJ ambassador Gaganjeet Bhullar began his round in sensational fashion in his FJ ICON golf shoes. Birdies at each of his opening three holes, followed by an eagle two at the Par 4 fifth hole after driving the green quickly closed the gap on the leader. Striding the fairways in the ultimate comfort and style of his FJ ICON™ golf shoes, Aitken proved to be unfazed by his challengers. An eight foot putt for birdie at the fifth moved him four clear and he never looked back from there, coasting home to a five under par 67 and a 23 under-par total. The winners cheque for €300,000  moves the 29 year-old up to 14th in the season long Race to Dubai Rankings.
On the LPGA Tour brand ambassador, Stacey Lewis continued her dominant form in 2013, capturing her second victory in two weeks at the RR Donnelley LPGA Founders Cup in Phoenix, Arizona. A final-round of eight-under par 64, including four birdies over the closing six holes enabled her to overturn a four-shot deficit and complete an stunning comeback. Competing in her favoured Women’s FJ Sport Boa shoes and FJ StaSof® glove, the 28 year-old now sits proudly atop the Rolex Rankings as the #1 ranked women player in the game.
In addition to Streelman and Aitken’s victories, the usage counts on both the European and the PGA Tour continue to highlight FJ’s position as the #1 shoe and glove in golf around the world. At the European Tour’s Avantha Masters 57% of the field put their trust in the brand’s all-encompassing range of golf shoes.  At the Tampa Bay Classic 63% of the competitors chose to compete in the outstanding performance and comfort of FJ golf shoes and an equally impressive 40% in the fit and performance of FJ gloves.
“Kevin and Thomas are two of the most talented golfers in the modern game and we congratulate them both on securing a double win for our renowned FJ ICON,” commented Russell Lawes, European Marketing Manager, FootJoy. “Stacey’s second win of the season is also richly deserved and we are delighted to be represented by the new women’s #1. To witness such impressive victories along with dominant shoe and glove usage counts on both tours also demonstrates the continued trust the world’s best players have for the outstanding performance capabilities of our 2013 product line.”
FootJoy have recently annonced a promotion on all their spikeless golf shoes - Click Here