Michael Thompson on captured his maiden PGA Tour victory after a commanding final round performance saw him walk away with the Honda Classic title. With the wind gusting all weekend, conditions at the PGA National Champion Course were extremely testing for the world-class field. It was the 27 year-old from Alabama who managed to cope best with the elements on Sunday as he held off a host of fellow FJ brand ambassadors to enter the winners circle for the first time. On the LPGA Tour FJ enjoyed further success, as Stacy Lewis secured her first win of the season, following a hard-fought one-shot victory at the HSBC Women's Champions in Singapore. 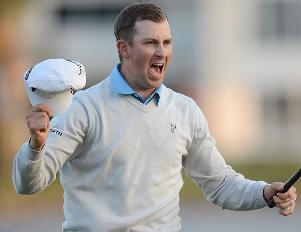 golf glove, Thompson began the final-round tied at the top of the leaderboard with fellow FJ loyalist Luke Guthrie. Some pin-point iron play and intelligent course management over the opening nine saw Thompson establish a three shot lead over his nearest competitors when he entered the feared Bear Trap at 15. With fellow FJ ambassador Geoff Ogilvy hot on his tail, Thompson remained completely calm to coast to a long-awaited  two-shot victory. The winner’s cheque of $1,026,000 vaults Thompson up to 11th position in the season-long FedEx Cup Series.

Striding the fairways of Sentosa Golf Club's The Serapong Course in her FJ Sport golf shoes and trusting the unrivalled grip and performance of the FJ StaSof glove, 2012 Rolex Player of the Year, Stacey Lewis continued her stellar form to walk away with her first victory of the 2013 LPGA Tour season at the HSBC Women's Champions. The 28 year-old watched a three-shot lead shrink over the final holes to just one as she headed to the 18th hole, but a long drive and solid iron shot into the par 5 set up a guaranteed birdie for 15 under-par winning total. Lewis is projected to move up to 3rd position in the 2013 Rolex Rankings.

In addition to two victories this weekend, the usage counts on both the European and the PGA Tour continued to highlight FootJoy’s position as the #1 shoe and glove in golf around the world. At the European Tour’s Tshwane Open a staggering 73% of the field put their trust in the brand’s all-encompassing range of golf shoes.  At the Honda Classic 58% of the competitors chose to compete in the outstanding performance and comfort of FJ golf shoes and an equally impressive 42% in the fit and performance of FJ gloves.

“Michael has long demonstrated all the necessary attributes to win on the PGA Tour, so naturally it is extremely pleasing to see him break into the winners circle in such commanding style,” commented Russell Lawes, European Marketing Manager, FootJoy. In the Women’s game Stacey continues to make her mark on the game and I am sure this victory will spur her on to yet another momentous season on the LPGA Tour. To see both leaderboards awash with FJ brand ambassadors further highlights the continued trust the world’s best players have for the outstanding performance capabilities of our 2013 golf shoe range.”