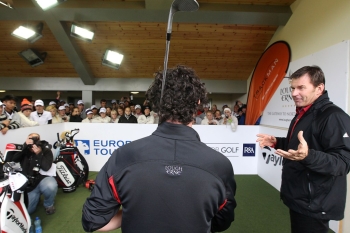 Sir Nick Faldo has revealed his desire to expand his successful Faldo Series to the United States.

Already spanning the UK, Europe, South America, Asia and the Middle East, Faldo is looking to further enlarge the status of the charity, and give youngsters better opportunities to develop their golf in North America.

Faldo, who has attained an impressive broadcasting career across the pond, created the Faldo Series in 1996 in order to give something back to the game and nurture the next crop of professional golfers.

The Series now hosts more than 7000 players in 27 countries around the world, but the six-time major champion doesn’t want to stop there.

He said: “We look to keep expanding the program and finally bringing it to the US. Right now we are in Europe, Asia and South America.

“I'd be very happy to see the Faldo Series played across the world and to meet more talented young players, like Tom Lewis.”

37 tournaments currently take place around the world, and the scheme is open to both boys and girls aged between 12 and 21.  The youngsters benefit from expert advice, and the top players qualify for the Faldo Series Grand Finals in either Ireland or China.

The 2008 Ryder Cup captain says he enjoys enhancing the ability of young golfers, and takes pride in the recent achievements of the charity’s alumni.

“I really enjoy working the developing players and providing an opportunity through golf.

“The fact that Rory McIlroy and Yani Tseng have risen to world number one is great. That is a tremendous example to the next generation of players.”