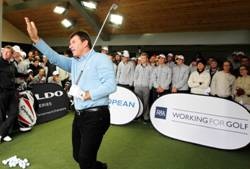 Sir Nick Faldo has announced a 2012 Faldo Series Europe schedule that features a record 20 events in 14 countries, including new tournaments in Austria, Bahrain and Chile.  With the Faldo Series Asia schedule set to be finalised in the coming weeks, the global golf development programme will benefit more than 7,000 young golfers in 27 countries this year.

“2012 is a significant year for Faldo Series participants as we expand our activities across Europe, the Middle East and South America,” said Faldo.  “When you factor in our Asian schedule as well, we hope to bring opportunity to 7,000 young golfers this year through 37 events in 27 countries worldwide.  It is the generous support of our partners, including The R&A, the European Tour and Lough Erne, which makes this possible.”

“This is an amazing opportunity for golf in Chile,” commented Mauricio Galeno, President of the Chilean Golf Federation which will host the inaugural Faldo Series Chile Championship on April 21-22.  “Joining the Faldo Series is a big step and we are sure it will be the beginning of a long and strong relationship with Sir Nick in order to develop relevance and penetration of golf in Chile.”

The European season tees off with the third Middle East Championship in Bahrain on March 23-24.  It concludes in September with the 16th Faldo Series Europe Grand Final, a World Amateur Golf Ranking event hosted by the six-time Major Champion at Lough Erne Resort in Ireland.

Open to boys and girls aged 12 to 21, the Faldo Series was established in Europe in 1996 and in Asia in 2006.  Past winners include Major winners Rory McIlroy and Yani Tseng.