AND so the first LIV Golf season has come to an end after eight tournaments that have ripped professional golf asunder, setting many of the sport’s leading lights against one another.

Twelve months ago, who could possibly have predicted the uproar that Greg Norman and his Saudi backers would have caused?

It has been a year that has seen Phil Mickelson bad-mouth both the PGA Tour, whom he accused of greed, and his Saudi paymasters, whom he described as “scary mother******s” in an interview he must now wish he hadn’t given. Lefty then withdrew from public life for a time.

And we have seen the PGA Tour announce massive increases in prize money as they seek to prevent any further defections. But rumours persist that as LIV Golf prepares for a 14-tournament schedule in 2023, more stars will make the move.

There will be court battles ahead as the PGA Tour bans are challenged and DP World Tour players seek clarification over their rights to compete on both the LIV Golf circuit and the DP World Tour.

And then there is the whole question of world ranking points. LIV Golf tournaments are played over 54 holes, with no cut and with 48-man fields so the powers-that-be have decided no ranking points will yet be awarded. It means that Dustin Johnson, who ended 2021 in third place in the rankings, now finds himself in 30th place despite winning one LIV Golf tournament and recording a series of top-10 finishes. You haven’t heard the last of this either. 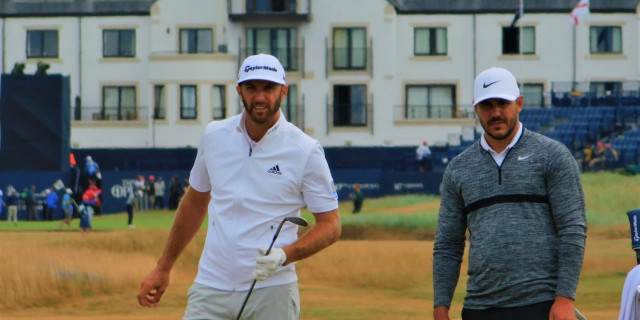 Mickelson and Johnson have also been removed from the PGA Tour’s all-time career money list. Not that Johnson will be at all concerned by that after picking up $31m in prize money alone in just eight LIV Golf tournaments plus a further $4m when his 4 Aces team won the LIV Golf Team Championship Miami at Doral.

The Saudis have thrown millions at the breakaway series - $784m this year and a further $1bn next year. Majed Al Sorour, chief executive of Golf Saudi, says there is funding until 2025.

Clearly, the Saudis cannot keep pouring such vast sums into the sport without expect to see something in return. A big part of LIV Golf is the team format and the hope is that with blue-chip sponsors on board, by 2024-25 the teams will be worth $1bn - and will attract a lucrative worldwide TV deal.

Bizarrely, the likes of Reed and Westwood are still eligible to play on the DP World Tour but cannot compete on the PGA Tour. So was Garcia until his disgraceful withdrawal from the BMW PGA Championship, which meant he did not play in sufficient tournaments to maintain his membership. Good riddance, some may say, to a spoilt and petulant individual who has now waved goodbye to his Ryder Cup career.

You can be certain that DP World Tour boss Keith Pelley was not exactly thrilled to bits when Adrian Otaegui won the Andalucia Masters. Why? The Spaniard was one of the early defectors to LIV Golf and was originally banned from competing in Europe before the decision was challenged and overturned - temporarily at least.

However, one thing has already been made perfectly clear. LIV golfers who qualify to play in The Open will be welcomed at Royal Liverpool in July 2023, with R&A chief executive Martin Slumbers saying that he looks forward to welcoming defending champion Cameron Smith.

Rory McIlroy and Tiger Woods have been vociferous critics of LIV Golf and everything it stands for, with McIlroy consistently singling out LIV Golf chief executive Greg Norman for criticism.

The Northern Irishman is one of the most articulate of golfers and speaks from a position of strength, having regained his place at the top of the world rankings.

When asked how long he would like to remain No1 he replied without hesitation: "332 weeks. I don't know if I can, but that's a number in my head.”

And why that number? Because that would take him past Norman and into second place behind Tiger Woods for spending the longest period as officially the world's best player.

Norman won 20 times on the PGA Tour. McIlroy took great delight earlier this year in pointing out that his victory at the Canadian Open took him to 21. “One more than somebody else,” he said.

You cannot fail to have noticed that McIlroy can barely even bring himself to speak Norman’s name.

Mickelson recently claimed that LIV is "trending up" while his former stamping ground on the PGA Tour is "trending down".

McIlroy refuted this. "I don't agree with what Phil said," the four-time major champion stated. "It's bold, but there is a lot of propaganda being used…I certainly don't see the PGA Tour trending downwards at all. You have got 95% of the talent here.”

Where will it all end?

Heaven alone knows but one thing is for sure - LIV Golf is not going away anytime soon and, for the good of the game, the PGA Tour, DP World Tour and LIV Golf need to find a way to work together before further damage is done to the credibility of the professional game.