Has Sergio Garcia Destroyed His Reputation in Europe?

Last week's BMW PGA Championship will not be forgotten in a hurry.

Before a ball had been struck in anger, the headlines were dominated by established stars such as Rory McIlroy and Shane Lowry saying they were struggling to come to terms with the presence of LIV golfers in the field such as Patrick Reed, Talor Gooch, Ian Poulter and Lee Westwood.

The tournament was then reduced to 54 holes after The Queen died on the opening day.

Lowry ended up winning on a thrilling final day when he held off the challenges of McIlroy and Jon Rahm. It was a fitting conclusion to the tour’s flagship event.

Lowry already has an eye on next year’s Ryder Cup. "There is no doubt I want to be front and centre on that team,” he said. "I want to be going to Rome and help the team out and win the Ryder Cup back and this is a great start to the qualification process.”

He also made it clear that he regarded his success as a victory for the DP World Tour.

“It is good that one us managed to win. There were a few lads making a charge before I went out and I was definitely motivated to go out and top that." 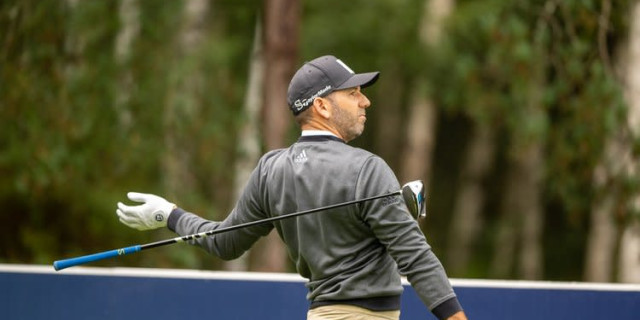 But then there was Sergio Garcia. After an opening round of 76, the Spaniard packed his bags and headed for home, without so much as a word of apology or explanation.

The Spaniard is Europe's leading points scorer in the Ryder Cup and was once regarded as the heartbeat of the team.

This was just the latest indiscretion on a lengthening rap sheet that includes destroying tee markers and bunkers, jettisoning a shoe into the crowd, spitting in a hole, insulting Tiger Woods and scuffing greens, among several other incidents of childish petulance and boorish behaviour.

Garcia began the week by saying he was at Wentworth because he wanted to support the DP World Tour - a tour he had openly criticised earlier in the year before he joined LIV Golf.

But long before the tournament was over he was back in Texas posing on social media supporting a college football team. For many onlookers, it was just the latest shameful episode in his career.

Having studied responses on social media, it's clear that the former Masters champion's reputation among a significant number of his peers and European golf fans has now hit at an all-time low.

Whether that can be recovered - with time - remains to be seen.