The Schism in Professional Golf Grows Ever Wider

SADLY, the scale of the schism that exists in professional golf has come to the fore once again this week, with events off the course continuing to dominate the headlines.

It is bad enough that legal battles lie ahead between the PGA Tour, LIV Golf and the PGA Tour rebels who have defected to the Saudi Arabian-backed circuit.

But now comes news that former Masters champion Patrick Reed has filed a $750m defamation lawsuit against The Golf Channel and its commentator Brandel Chamblee.

It comes after Tiger Woods arrived in Wilmington to speak the PGA Tour players gathered there for the BMW Championship. Woods, of course, failed to make the field for the 70-man tournament but chose to fly in to urge his fellow players to remain loyal to the PGA Tour.

McIlroy believes the 46-year-old still has a significant role to play in shaping golf's future.

He said: "Like it or not, they can't really sell Tiger Woods any more. The Tour had an easy job for 20 years. They don't have Tiger - yes, they've got a bunch of us and we're all great players, but we're not Tiger Woods.

"We're moving into a different era, and we just have to think about things a little differently.

"He is the hero that we've all looked up to. His voice carries further than anyone else's in the game of golf. His role is navigating us to a place where we all think we should be.

"I think it's pretty apparent that whenever we all get in the room there's an alpha in there, and it's not me.

“The one thing that came out of it, which I think was the purpose, is all the top players on this Tour are in agreement and alignment of where we should go going forward, and that was awesome.

"We need to get the top guys together more often than we do." 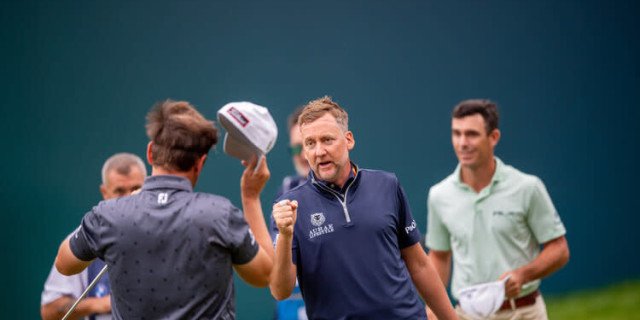 (Ian Poulter is Competing in Prague This Week)

The American is a colourful character who has courted much controversy throughout his career and he joined LIV Golf in June.

His lawsuit alleges that Chamblee and the network have been "actively targeting Reed since he was 23 years old, to destroy his reputation, create hate and a hostile work environment for him, and with the intention to discredit his name and accomplishments as a young, elite, world-class golfer."

Reed goes on to accuse Chamblee of "misreporting information" with "reckless disregard of the truth."

Reed's is one of many expected legal battles between players on LIV Golf and the PGA Tour.

Meanwhile, Relmost, the sponsors at the Czech Masters delivered something of a slap in the face to the DP World Tour when they chose to use Ian Poulter as their main poster boy for this week’s event.

DP World Tour CEO Keith Pelley tried to ban Poulter and other rebels over their involvement with LIV Golf, only for a legal appeal to grant them permission to carry on playing pending a full court case.