THE D+D Real Czech Masters has become something of a personal benefit for Thomas Pieters and the Belgian will be looking to win the tournament for a third time this week. He has won six times in total with two of his wins coming in this event, in 2015 and again in 2019.

Pieters has shown some magnificent form this year, winning the Abu Dhabi Championship in January. He has played 11 times on the DP World Tour this season, missing just one cut and finishing second at the BMW International Open in June.

He hasn’t had such a good time on the PGA Tour, missing three cuts in eight starts but he did play all four days at the US PGA, US Open and 150th Open at St Andrews and is now comfortably inside the top 40 in the world rankings.

He turned professional in 2013 and made his debut on the European Tour at the French Open, where he finished 29th. He then went to tour school, where he gained his card.

His first win came at the Czech Masters in 2015 and then won the KLM Open. There were also five top-10 finishes as he ended the year in 29th place in the Race to Dubai.

In 2016 he represented Belgium at the Olympic Games and finished fourth behind Justin Rose. He nearly won the Czech Masters again and came out on top at the Made in Denmark and was chosen by Darren Clarke to represent Europe at the Ryder Cup. Europe lost, but Pieters made an outstanding debut.

He opened the 2017 season with a tie for second at the Genesis Open and then had a top-five finish at the WGC Mexico Championship and finished fifth at The Masters.

In November 2018, Pieters won the World Cup of Golf with Thomas Detry. He won the Czech Masters again in 2019 but then struggled with his game until winning the Portugal Masters in November last year and followed it with a success at the Abu Dhabi Championship earlier this year for his first Rolex Series win.

Unsurprisingly, he will be looking forward to heading back to the Czech Republic again this week. 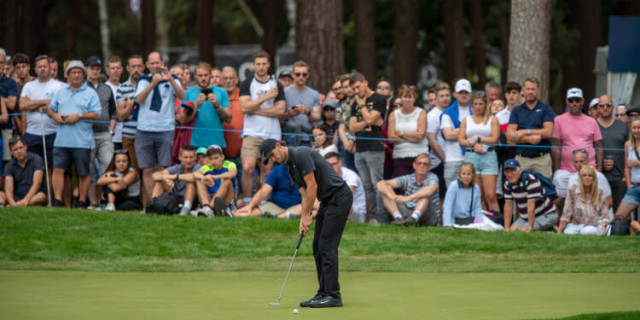 The defending champion is Johannes Veerman of the United States. He had six birdies and two bogeys on his way to a final-round 68 at Albatross Golf Resort, seeing him end the week on 15 under and two clear of Sean Crocker and overnight leader Tapio Pulkkanen.

Pulkkanen was top of the leaderboard until he dropped three shots over his final two holes to close a level-par 72 and slip into tied-second, with Henrik Stenson three off the pace in a share of fourth alongside Paul Peterson.

"It's unbelievable," Veerman said. "I played with two great players today, both of them played really well the whole way. At one point there was three of four of us all tied for the lead, but I stuck to my game and I can't believe that I won.”

Crocker is another who has since entered the winners’ enclosure. He finished on top of the pile at the Hero Open last month and is now full of confidence and will want to prove that his success in Scotland was not a flash in the pan.

Albatross Golf Course has a links feel. It features plenty of bunkers and several man-made water hazards. It is a par 72 measuring 7,500 yards. It features two huge back-to-back par fives, the ninth and 10th, measuring 639 and 609 yards respectively.

Thomas Pieters adores this golf course, having won twice here as well as a runner-up finish. He has won this season and is one of the most impressive ball strikers in the game. Sean Crocker finally made the breakthrough when he won the Hero Open in July and he will be looking to kick on. Victor Perez won the Dutch Open and finished in a tie for third at the Porsche European Open - he is one of the best putters on the European Tour

Victor Perez. If his putter is hot he could walk away with this

Thomas Pieters. Nobody does it better here

Sean Crocker. Needs to prove Hero Open was not a one-off

Rory Sabbatini. One of the game’s most colourful characters