During the inevitable appraisal following Europe’s first Ryder Cup defeat in eight years, the sublime performance of Thomas Pieters has been considered one of the few bright spots. The tall and powerful Belgian, making his first appearance in the biennial contest, was Darren Clarke’s most prolific points earner, playing a pivotal role in securing more than a third of the away side’s dismal overall total of 11, which is the lowest recorded by a team from the continent since 1981.

Those four victories – three of them alongside the talismanic and inspirationally charged Rory McIlroy – have established the 24-year-old as being the most successful European debutant in history. That may well be a significant accolade, but what is most telling about his prodigious ability; is that it didn’t come as much of a surprise to even the most casual observers of the game.

Only a few days removed from that breakthrough experience on the biggest stage in golf, Pieters has swapped the fevered intensity of Hazeltine for the comparative tranquillity of St. Andrews at this week’s Alfred Dunhill Links Championship. “I think it’s tough to talk about my individual performance when you lose as a team,” he reflected during his pre-tournament press conference. “You go there as a team, so you win or you lose as a team, and obviously there’s talk about me being a rookie and having four points, and I played great and I’m really happy to have earned four points.”

It was the unearthing of a new star in the mainstream, and he is now comfortably the main attraction at the Home of Golf. (No offence to Huey Lewis). For all that is likely to be said critically of the captain, and much of it may be justified in the aftermath of defeat, the confidence Clarke had placed upon Pieters by playing him in all five sessions was an unqualified triumph.

That decision was made in spite of a loss during the crushing Friday morning foursomes, where the youngster was paired alongside the veteran Lee Westwood. They were felled 5&4 by Dustin Johnson and Matt Kuchar, but it was clear to everyone watching that it was the junior partner who had made up for the shortcomings of his experienced teammate. The deficit would have been even greater without him.

It was nonetheless not the ideal initiation for anyone into the game’s most frenzied and gripping atmosphere, but this wasn’t a normal rookie. Just over a month previously, in a showing that ultimately secured his status as one of three wild card picks, the University of Illinois alumnus had been strategically paired with the captain during the first two days of the Made in Denmark, which was the last event before those final selections were made.

He would shoot 62 on that Thursday, which Clarke stated was “one of the finest (rounds) I've ever witnessed and (he) made it look very easy.” It certainly left an impression on the former Open champion, not least because it catapulted the Belgian to his third victory on the European Tour. His flight to Minnesota had been booked with a first-class performance. 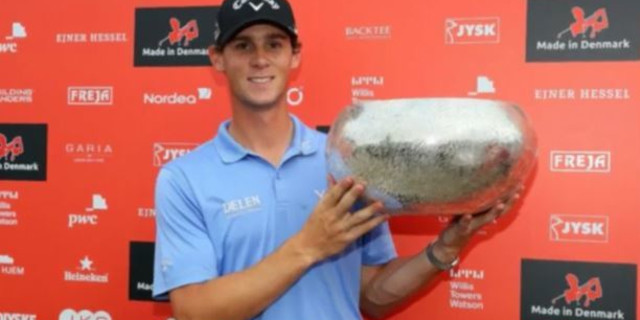 Those are the qualities that have seen Pieters become regarded as one of the game’s most impressive emerging talents. He possesses that enviable ability to make the game look effortless, which reflects an impeccably calm demeanour. It’s more than just a façade. He was more than equipped to handle the scrutiny and spotlight that naturally comes with a Ryder Cup.

Shown faith by the captain, he was sent out again on the Friday afternoon for the fourballs, where his length off the tee and aggressive style of play would be provided the freedom to flourish. Paired alongside the four-time major champion McIlroy, it was a gem of a partnership that won all three matches together in relatively comfortable fashion, spearheading the attempted comeback.

The recent FedEx Cup winner had fully embraced his role as a senior member of an inexperienced team, and declared that in Thomas Pieters, he had discovered the ideal partner for the future, stating afterwards that: “I’ve got a partner beside me for the next 20 years, I’m not letting anyone else have him. “It’s without question a duo that has the potential to become one of those great twosomes that have defined the overall dominance of Europe during recent decades.

When asked about that statement of intent from the Ulsterman, Pieters smiled when reflecting on the positive validation. “It’s fine with me. It’s Rory McIlroy, he’s the best player in the world. If he says, ‘I want you on my team for the next ten years,’ I just go ‘okay.’

“He’s like a machine. Obviously it’s match play, you’re going to take on much more risk than playing in any other tournament. We both hit it very long, we both played very aggressive, and I think we both believe in our abilities that if one of us hit a bad shot to a tight pin, the other one is going to pull it off.”

The prospect of those two alongside each other is a mouth-watering one for European golf fans, but for now, the Antwerp-native’s focus is on next year’s major championships, where he hopes to make impressive debut appearances at the Masters and U.S. Open. If those maiden bows are anything like his efforts from last week, then he will make an even greater impression than before, and will drive down Magnolia Lane in April with the confidence of the Ryder Cup behind him.

When asked what he had learned from his experience, Pieters responded: “That I can (perform) in that kind of environment, and I don’t think anywhere in the majors is like that, it’s going to be easier I think. I took a lot of confidence from that.”

Having turned professional three years ago, forgoing his senior year at college, it’s been a meteoric rise that has progressed more quickly than expected. “It’s a weird feeling, it’s only been two years since I was struggling for my card and now I’m here, just played in the Ryder Cup. It went a bit fast.”

And if Rory McIlroy has his way, it’s only the beginning for Thomas Pieters.