Returning from the cauldron of fevered intensity that was the Ryder Cup, six of Darren Clarke’s unsuccessful European team have descended upon the comparative tranquillity of the Home of Golf to compete in the Alfred Dunhill Links Championship. The captain himself had been scheduled to play, but has perhaps understandably withdrawn in the face of the old continent’s biggest defeat since 1981, while Thomas Pieters, Matthew Fitzpatrick, Rafael Cabrera Bello, Martin Kaymer, Lee Westwood and Danny Willett have all made the trip to the sunny east coast of Scotland.

This annual pro-am showpiece is comfortably among the most lucrative events on the European Tour, and can play a significant role at this late stage of the season for anxious minds who have found themselves outside the sanctuary of the top 110 on the Race to Dubai. Just ask Oliver Wilson, the likable Englishman, who two years ago produced one of the most unexpected of triumphs in recent history by securing his first title at St. Andrews when ranked a lowly 792nd in the world.

Emotions were similar for a delighted Thorbjorn Olesen, who was a surprise winner last year in the aftermath of a significant injury layoff due to hand surgery. The 26-year-old Dane, who was last week an active supporter of Team Europe at Hazeltine, is unsurprisingly excited about the opportunity of defending what is biggest achievement of his career to date. 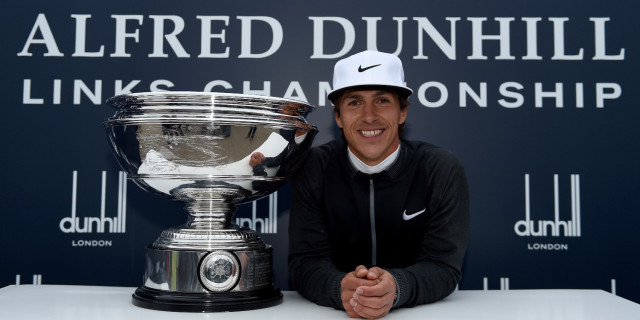 “I would like to have my first back-to-back victory and what better place than at the Home of Golf,” he said. “St. Andrews is a special place. The 1st hole, the last three, walking over the bridge on 18. It’s an incredible place and you can feel the history around the course and clubhouse. Playing with the amateurs makes for a fun few days. It’s different from the norm, but playing with the amateurs can make it a bit more relaxed which can help the professionals’ own performance.”

Though it may be a welcome diversion from the unrelenting pressures of professional golf, the presence of those generally wealthy (and often better known) duffers can have its downsides, particularly in relation to the pace of play, which has far too regularly reduced a potentially unmissable tournament into being simply unwatchable. It seems to exist as a plaything for rich guys, with 20 of them making it through to the defining Sunday being nothing more than an indulgence.

That being said, with the event being played concurrently over three of the world’s finest and most revered layouts – the Old Course, Carnoustie and Kingsbarns – it can be appreciated as a celebration of links golf that connoisseurs of the game’s purest form will find hard to completely resist.  However much the presence of Ronan Keating and Hugh Grant et all may grate.

The presence of those aforementioned European stalwarts is a huge plus for viewers whose interest is focussed on actual golfers, with Thomas Pieters, the leading points earner in Minnesota, looking to carry that form into this week. The Belgian’s prodigious power and cool nerves were a highlight of the matches, but it wouldn’t have come as a huge surprise to close observers of the game, with the 24-year-old being touted as an imminent and emerging star for some time now.

Rafael Cabrera Bello was another standout, forming an effective partnership with experienced compatriot Sergio Garcia, before seeing off golf’s most recent major winner, Jimmy Walker, in the singles on Sunday. For Kaymer, Westwood and Willett, this year’s memorable edition of the biennial contest was a grave disappointed, and they will relish the different surrounds of Fife and Angus.

Elsewhere, former champion Branden Grace will be considered one of the pre-tournament favourites, with the 28-year-old South African having become a major contender in recent times. Alex Noren, who triumphed at Castle Stuart in July, will be seeking to continue his run of Caledonian success, also being a losing finalist at the Paul Lawrie Match Play, while Louis Oosthuizen, who lifted the Claret Jug at the cradle of the game six years ago, is another obvious name to follow.

With conditions expected to be reasonable throughout the week, scoring will be typically low across the three courses, which should ensure for a compressed leaderboard ahead of the finale in the Auld Grey Toon. It has been a disappointing week for European golf, but the blue skies above the legendary Old Course will be a more than effective tonic for those reeling in the rubble.

18 Tips to Improve Pace of Play on the Golf Course

View From The Fairway - Time to Embrace the WHS