THOMAS PIETERS surely secured one of the three wild-card selections for Europe's Ryder Cup team with a superb finish to win the Made in Denmark.

The 24-year-old Belgian finished fourth in the Olympic Games golf tournament and was second at the Czech Masters last week and then began his challenge in Denmark with a fantastic round of 62. He only narrowly missed out on automatic selection and has now almost certainly done enough to force his way into the team.

He played the first two rounds with Darren Clarke, the European captain, at Clarke's request, and the Northern Irishman was effusive in his praise of the big-hitting Belgian after his opening round. He began the day trailing Welshman Bradley Dredge and shrugged off  the pressure of a four-hour weather delay to drop the broadest possible hint to Clarke.

He almost had a hole-in-one at the 16th and followed that with brilliant approach shots at the 17th and 18th holes to close with three birdies for a round of 65 and a finishing total of 17 under par to beat Dredge by a shot.

Clarke names his three wild cards on Tuesday and it would now be a major surprise if he doesn't hand one of them to Pieters, even though he is a rookie. This was his third win on the European Tour and he has consistently proved that he can perform when the chips are down. 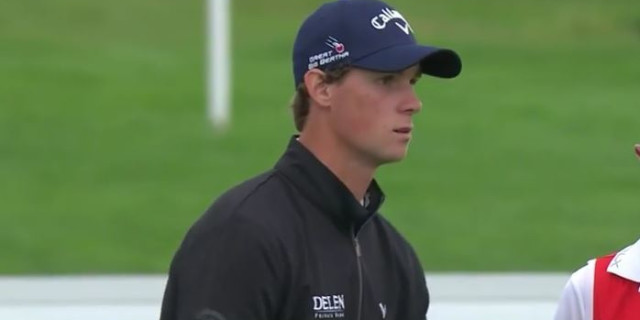 "I really needed a good finish," said Pieters. "I saw I was one back walking to the green on the 16th and I hit a great shot there but I knew I needed to make at least one more. To finish with two more birdies was pretty cool. It's all about winning tournaments. I'm really happy with this one. That was one of my goals, to just have one every year, just so you know you're improving and you can win. That's very important. I'm very, very happy."

Dredge also finished second in this tournament when he was beaten by Marc Warren two years ago. This time he finished one in front of Adrian Otaegui and David Lipsky. Swede Joakim Lagergren was then at 13 under after a closing double-bogey, two shots ahead of Martin Kaymer and South African Jaco Van Zyl. Kaymer is another who will expect to be given one of those precious wild cards, with Lee Westwood likely to get the nod for the final place.

Pieters birdied the fourth, sixth and eighth holes to open up a one-shot lead over Dredge and Spaniard Otaegui when the stormy conditions that had prompted the European Tour to bring the tee times forward arrived.

A lengthy delay followed and Pieters bogeyed the ninth upon the resumption, with Otaegui producing a chip-in on the eighth to take the lead. Otaegui fell back with two bogeys in three holes while Pieters birdied the 11th, but Dredge and Lipsky both birdied the 10th and 11th holes, giving Dredge the lead again.

Lipsky birdied the 14th to join Dredge, and when Lagergen made a third birdie in a row on the 16th, there was a four-way tie at the top. Otaegui had birdied the 14th, 16th and 17th to get back into contention but when Pieters and Lagergren both birdied the 17th, they stood on the final tee tied for the lead at 16 under.

There was agony for Lagergen when he lost his ball at the 18th and recorded a double-bogey as Pieters birdied the hole. The final drama came when Dredge holed a huge putt on the last to take second place on his own.

Local favourite Soren Kjeldsen gave the huge home crowd plenty to cheer about with a closing round of 66 to finish on 10 under alongside Portugal's Ricardo Gouveia.

PATRICK REED finally broke his duck for the 2016 season - and what a time to do it. A player who has racked up a host of top 10 finishes won the Barclays Championship, the first of the four FedEx Cup playoff events, at Bethpage Black as Rickie Fowler fell to pieces on the back nine.

In the process of shooting a final round of 70 for a nine-under-par total of 275 to win by one shot, Reed took himself to the top of the FedEx rankings and, potentially like Pieters, clinched his place on the US Ryder Cup team.

Fowler, who began the year in sensational style, has been struggling for weeks but appeared to have his game back under control as he moved to 10 under par with a birdie at the fourth. But then the wheels came off. He bogeyed the 11th and 15th and then fell back to six under par with a double-bogey at the 16th. Reed dropped a shot at the third but birdied the fourth, fifth and seventh and added another at the 12th to move 11 under.

Playing with Fowler, he also dropped a shot at the 16th but at 10 under he was still two ahead of Sean O'Hair and Emiliano Grillo.

Unbelievably, Fowler bounced straight back with a birdie at the par three 17th. Reed, meanwhile, hit his tee-shot against the collar and fluffed his first putt, leaving it fully 10 feet short of the hole. But the gutsy American drained the putt to maintain his two-shot lead.

Up ahead, Adam Scott struck a glorious second shot to the 18th, finishing no more than three feet from the hole. He needed to hole the tiddler to join O'Hair and Grillo, but the ball didn't even touch the hole.

So Reed came to the final hole knowing that a bogey would be good enough. He pulled a rescue club from the bag and promptly hooked his ball into a bunker, where it plugged under the lip. As he addressed the ball, members of the gallery who had clearly drunk rather too much accused him of being a choker. It was thoroughly unpleasant and there is no place for such behaviour on the PGA Tour, or anywhere else. Fowler's woes continued as he drove into the rough and then hit his second way left before hitting his approach 20 feet beyond the cup on the par four. He took two putts for a final round of 74 and a six-under-par total. Fowler was devastated.

Reed hit the ball as hard as he could, but was only able to progress it 25 yards, but was at least back on the fairway. He put his third shot on the green, about 18 feet from the hole, and knew he needed to take two more putts to win, and he duly finished the job.

"It feels amazing to get the job done. I did a lot of things well and I did enough toget the job done," Reed said. "I am delighted to be back in the Ryder Cup team - it was one of my goals this season. This time I hope to be on the winning side and bring that little trophy home again."

O'Hair's final round of 66 took him from 108th place in the standings to 16th.. Jason Day finished on seven under and moves from first to second in the FedEx standings.

Among those who will not be in the 100-strong field for the Deutsche Bank tournament next week are Keegan Bradley, Jonas Blixt, Lucas Glover and Robert Streb.