TRY telling Justin Rose that an Olympic gold medal doesn't matter. Rose won the Olympic golf tournament in Rio for Great Britain and was as thrilled to do so as when he won the US Open in 2013. There was no huge pay cheque, just gold, silver and bronze medals for the men who finished first, second and third.

Rose won with a birdie on the final hole for a round of 67 and a 72-hole total of 268, 16 under par. He beat Henrik Stenson, the Open champion, by two shots after the Swede dropped a shot at the 18th. Rose's reaction told you everything you needed to know. He was overjoyed. Justin Rose, Olympic champion! Stenson took the silver, Matt Kuchar, of the USA, the bronze. 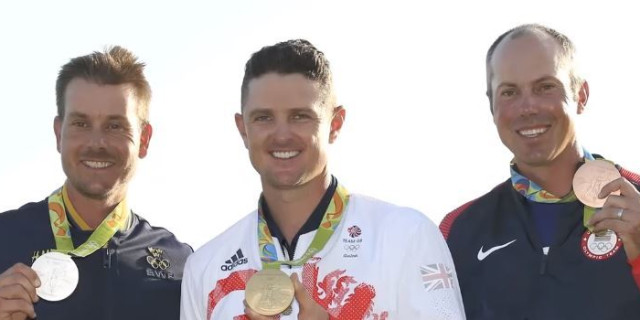 But the crowds did turn up, 12-deep in the final round, and the course was finished on time and, frankly, was quite magnificent, with beautifully-manicured fairways, fabulous greens and 18 tough golf holes. There are fears that it will not be used by locals after the Olympic Games - it is to be hoped that is not true. This course will hold a special place in the hearts and minds of Rose and Stenson for the rest of their lives.

These four rounds were not about branding. They were about proud men representing their countries, and it was magnificent and moving. They all wore polo shirts that proudly displayed the Olympic rings and the names of their nations. No Ping logos, no Nike logos, no TaylorMade branding. In other words, golf as it should be played.

If there was an issue it was with spectators who didn't seem to understand the etiquette of the sport. One of them picked up Rose's ball after a wayward drive early in his round and they struggled to understand why they couldn't take photographs while the players were hitting shots.

The real losers were the men who stayed away. Rory McIlroy, Dustin Johnson, Jordan Spieth, Jason Day, Adam Scott, Charl Schwartzel and Louis Oosthuizen will surely have watched the action from Rio and regretted their decision not to play. They must now hope that they get the chance to put that right at the 2020 Olympics in Tokyo, where golf is scheduled to reappear.

Rose started the day one ahead of Stenson, who has been suffering from back pain and needed treatment during the final round to give him some relief. The Englishman birdied five holes on the front nine on his way to a fine 32. His problem was that Stenson went one better - their play was reminiscent of the astonishing battle between Stenson and Mickelson in the final round of The Open. At the 11th hole he hit his drive into a bush but produced a remarkable recovery shot and walked off with a par to remain tied with Stenson at 15 under par.

Both men then dropped shots to fall back to 14 under. At the 15th, a 410-yard par four, Rose took his driver, Stenson opened to hit an iron. Rose hit a wonderful drive and then put his approach six feet from the hole. Stenson, meanwhile, came up short with his second and did well to walk off the green with a par. But Rose made no mistake with his birdie putt. And so he moved to the 16th with a one-shot lead.

Stenson responded at the 16th with a stunning approach to four feet. Rose hit a poor second but hit a wonderful putt that just missed. The Swede gave his putt as much attention as any he struck at Royal Troon and duly holed it for a birdie. With two holes to play, they were once again tied at 15 under par.

And so to the par-three 17th, measuring just 133 yards, but played to a small green guarded by bunkers at the front and with a run-off area at the back. Stenson hit a wedge to 25 feet, Rose to 30 feet. Both men parred the hole and headed off to the par-five 18th to see if they could sort things out in regulation play. 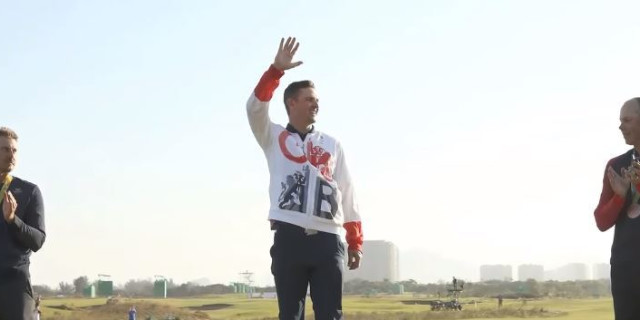 As they stood on the tee you can be certain they would have agreed right there and then to share the gold medal. That wasn't an option. The hole measures 571 yards and requires a drive hit over a mass of scrubland. Stenson pulled the driver for only the third time in the round and hit it way right. Rose had to step away from his tee shot as a mobile phone rang, and then went almost as far right as Stenson.

Stenson's second shot, with a three wood, came up about 50 yards short of the green. Rose was fully 30 yards closer to the target and he also went with a fairway wood, finishing a little closer to the green. Stenson was first to hit his approach and hit a poor shot,coming up 20 feet short. Could Rose get close?  He put it two feet from the hole, and now the Swede had to hole his putt to force a playoff. Stenson three putted to hand the gold medal to Rose, man who created history in the opening round with a hole in one.

Kuchar shot an eight under-par 63 to finish on 13 under and secure the bronze medal. His reaction when his putt for birdie on the final hole stopped on the lip told you everything you needed to know about how much this meant to him. He was gutted.And as it turned out, if the ball had dropped he would have been sharing the silver medal with Stenson.

Bubba Watson has said that he couldn't quite believe that here he was playing in the Olympic Games, mixing with the best athletes in the world. "Man, this is just surreal," he said. "It is a huge privilege to be here taking part in the biggest sporting event on the planet. I feel so lucky and will never forget this experience." In return, the fans loved him. 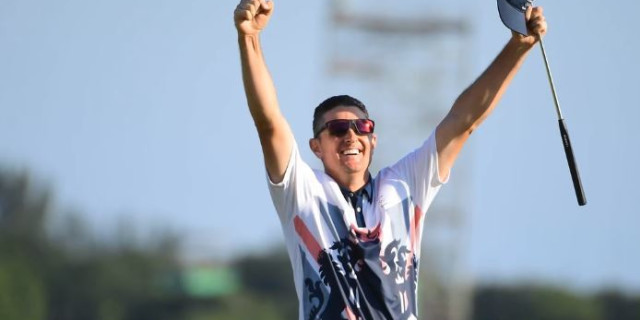 And Rose? "This ranks right up there with anything I have ever done in golf," he said. "People talk about majors being the pinnacle, and they are, but this is as good. It is an honour to have won this golf tournament in front of these amazing fans. I am thrilled."

Meanwhile back on planet earth, Ryan Moore collected his fifth PGA Tour victory when he won the John Deere Classic at TPC Deere Run after a final round of 67. It gave him a 22-under-par total of 262 and a two-shot victory over Ben Martin.

He began the day leading Martin by a shot and when he birdied the second, fourth and ninth he was in complete control. And when he added another birdie at the 10th after a sublime approach, Moore was 22 under par and four in front. He briefly went five in front and seemed to be marching towards the title.

But then Martin found his game and when he birdied the 12th, 13th and 14th holes he had reduced Moore's lead to two. Martin is a streaky player - he either plays brilliantly or he plays horribly. He won his first tournament in 2014 but hasn't entered the winners; circle since.

This, however, was a week when he played really well from tee to green and was able to hole more than his fair share of putts.

Moore had a scare at the par-three 16th when he ran his first putt three feet beyond the hole but, with the pressure really on, he found the centre of the hole.

The 17th is a par five with a tree-lined fairway. Martin made a cardinal error, pulling his drive into the trees on the left, meaning he had no chance of getting home in two. Moore had eagled it earlier in the week and duly found the middle of the fairway again, but this time he couldn't reach the green in two and had to lay up. Martin was fortunate to find a decent lie but also had no chance of going for the green - two back with two holes to play, he had to make a birdie and hope that Moore didn't.

Both men hit their third shots to about 15ft, with Martin slightly further away from the hole. If he could hole his putt, the pressure would be on Moore to follow him in. As it turned out, neither man could convert, so headed to the final hole with Moore, still 22 under, two ahead of Martin. They each found the fairway, but Moore had mud on his ball and Martin finished in a divot - both still found the green.

Moore's victory was no surprise - he hadn't dropped a shot since the eighth hole in the second round and hit 46 of 56 fairways during the tournament, and it is his sixth top 10 finish of the year.

Whee Kim and Morgan Hoffman finished the tournament in 125th and 126th position in the FedEx Cup points race after finishing in a tie for third on 17 under - only the top 125 qualify for the FedEx Cup playoffs. Johnson wagner, who started the week in 125th place, had a decent tournament and moves up to 109th.